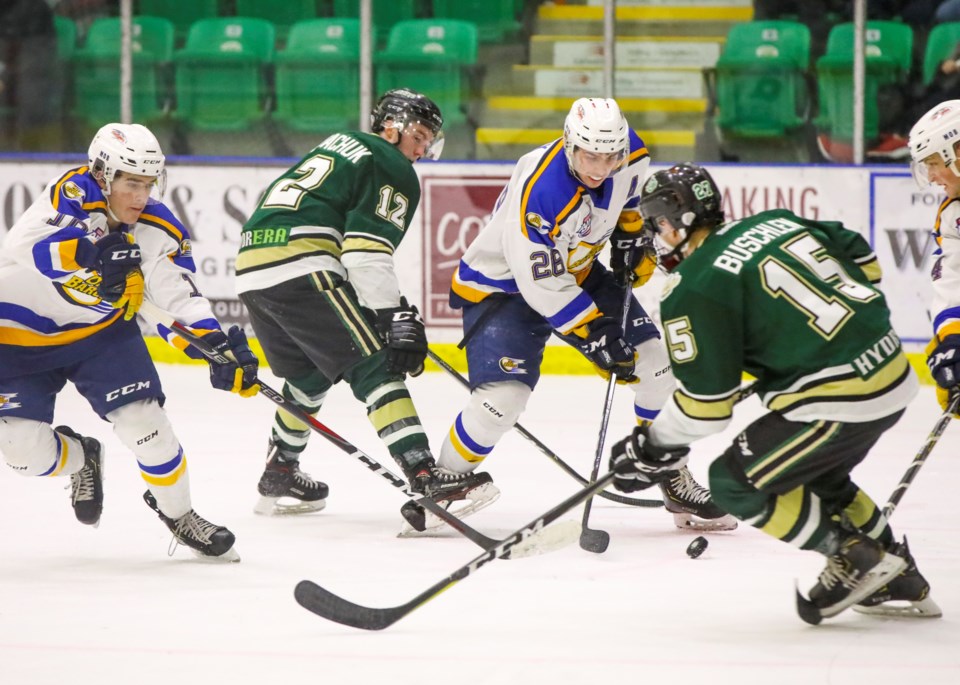 From uncertainty to Hockey East – a Blackie forward has landed on his feet.

Less than a week after the University of Alabama-Huntsville Chargers dropped their men’s hockey program Liam Izyk found a new collegiate hockey home, landing with the Boston College Eagles — a perennial NCAA Division I contender in Hockey East.

“We had one of those group Zoom calls and about 1 o’clock on (May 22) we all got together on the call,” said Izyk, a Foothills and Okotoks minor hockey product. “Our coach (Mike Corbett) was a little bit upset and then he told us what was going on with our athletic director and president cutting the program.

“They told us to reach out to other schools and all the coaches to see what we could come up with in terms of transferring, they said they would help us find new spots and new homes as much as we could.”

Given the challenges for universities amid the COVID-19 pandemic, Izyk said he was expecting to perhaps have a shortened 2020 season, but did not see the news of the program being axed coming at all.

“Everyone was pretty shocked, we thought we had one more year in the WCHA and then we were going to start searching for a new home as a division,” he said.

The 21-year-old had three goals and 11 points in 32 games for the Chargers, who struggled to a 2-26-6 record. He had a strong end to the season, winning the WCHA Rookie of the Week award after registering five points in a weekend set versus Michigan Tech and Alaska.

“I wasn’t sure what was going to happen, there was definitely a little bit of unease, I thought I might possibly have to come back to Canada and play for a team closer to home,” he said. “But I reached out to my parents and my advisor from junior (Brandon Watts) about me finding a new place from Alabama. They got to work right away and (Watts) called me back about an hour later and said there were a couple schools interested. Boston College called me within an hour.

“That was a good feeling to know teams were interested, but it was a pretty stressful week until I actually got an offer.”

He joins an Eagles team loaded with NHL prospects, including a trio of 2019 first-round draft picks in Alex Newhook, Matt Boldy and Spencer Knight.

“It’s a pretty exciting program to be a part of, it’s got a lot of history and a winning culture so any time you get a chance like that you’ve just got to take it,” said Izyk, who plans to study business at the Massachusetts school. “I’m excited to be part of that winning culture and that competitive mindset of just showing up to practice and trying to get better and competing with the group and against each other as well and I’m excited to be part of a group with that high-end talent.”

Izyk is back home — along with sister Carmen, an elite athlete in her own right as a rugby player at Queen’s University — working on the farm in Blackie for the summer.

In the wake of the Chargers being shut down, a massive fundraising campaign was launched and raised more than $500,000 in gifts, as reported by the UAH athletic department. Along with donor support, the $750,000 raised will allow the Chargers to ice a team for the 2020-21 season.

Izyk said he was happy to hear the news for the good people behind the program as well as for former teammates who could potentially return to UAH.