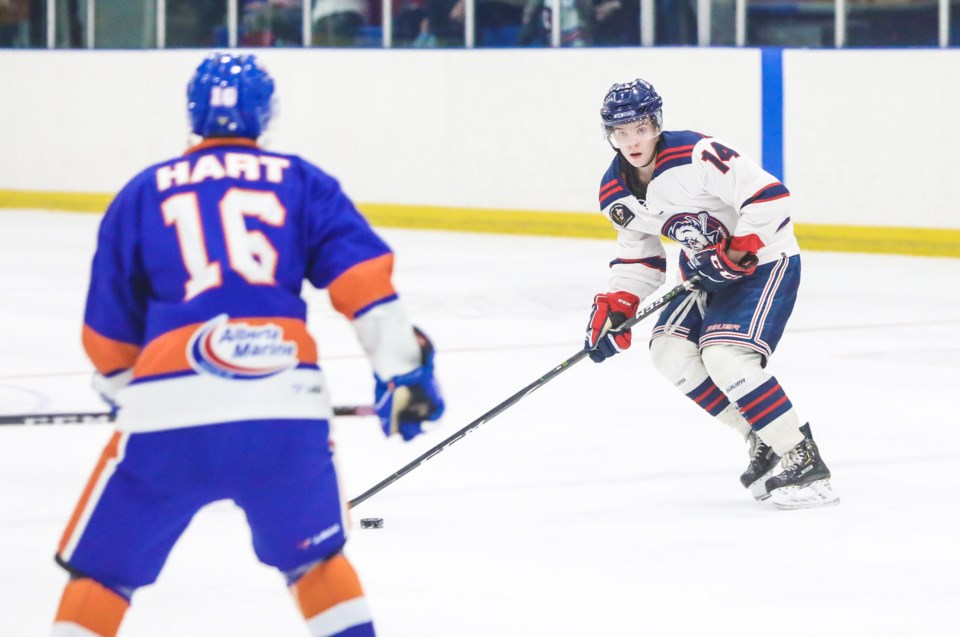 Okotoks Bisons defenceman Kale Hawryluk notched his first goal of the season while playing up at forward in the 9-1 win over Lomond on Jan. 18 in Vulcan. (BRENT CALVER/Western Wheel)

There’s nothing like putting the puck in the net to blow off steam.

The Okotoks Jr. B Bisons (30-2) put pedal to the medal in a 9-1 victory over the Lomond Lakers on Jan. 18 to complete a two-game weekend sweep in the Heritage Junior Hockey League in style.

“The biggest highlight for me was we hadn’t enjoyed the game the last month or so,” said Bisons head coach Chris Beston. “And we saw some smiles on faces again, guys were happy, we had some fun and you see the joy in their faces again.

“I just think there’s probably a lot of pressure, you’re the number one team in Alberta, there’s a stress of performing every night. It was nice to get up and have some fun.”

Blueliner Kale Hawryluk might have enjoyed the game more than anyone.

The playmaking blueliner notched his first goal of the season while playing up as a forward in the late stages of the blowout victory.

“We tried to get him his last goal in the last four or five minutes,” Beston said. “He had a breakaway and missed and then ended up scoring on a rebound.

“He’s a talented player and to go this long without a goal, he was getting a little frustrated, but it was nice to see him get the monkey off his back.”

New addition A.J. Belanger, who started the 2019-20 season with the AJHL’s Olds Grizzlys, marked his Bisons debut with a third period tally.

Reagan backstopped Okotoks with 30 saves in the 6-4 road win over the provincial host Medicine Hat Cubs on Jan. 17.

Dylan Wenzel scored twice in the victory, with Alger, Scott, Tyler Witzke and Tyson Laduke also finding the back of the net.

“We didn’t really have our A-game that day, it was more of a found a way to win,” Beston said. “We didn’t have our best stuff, but we just tried to capitalize on the chances that we had. Med Hat gave us a good fight again and we found a way.”

Okotoks improved to 4-0 in the season series with Medicine Hat.

“They’re a good team,” the coach added. “Don’t get me wrong, they compete hard and it just seems they catch us at a time when we don’t have the right stuff.”

Okotoks is on the road again this weekend with stops in High River and Coaldale on Jan. 24-25. The Bisons’ next home game is Jan. 31 against Strathmore.

“We’re looking for two competitive games,” Beston said of this weekend’s slate. “High River, you can’t look at what their record is, we know we’re going to get their best game and we have to be ready, especially in their barn. It’s not an easy barn to play in and we have to be prepared mentally and physically for this game.”