Bisons coach concerned pause from play will get extended 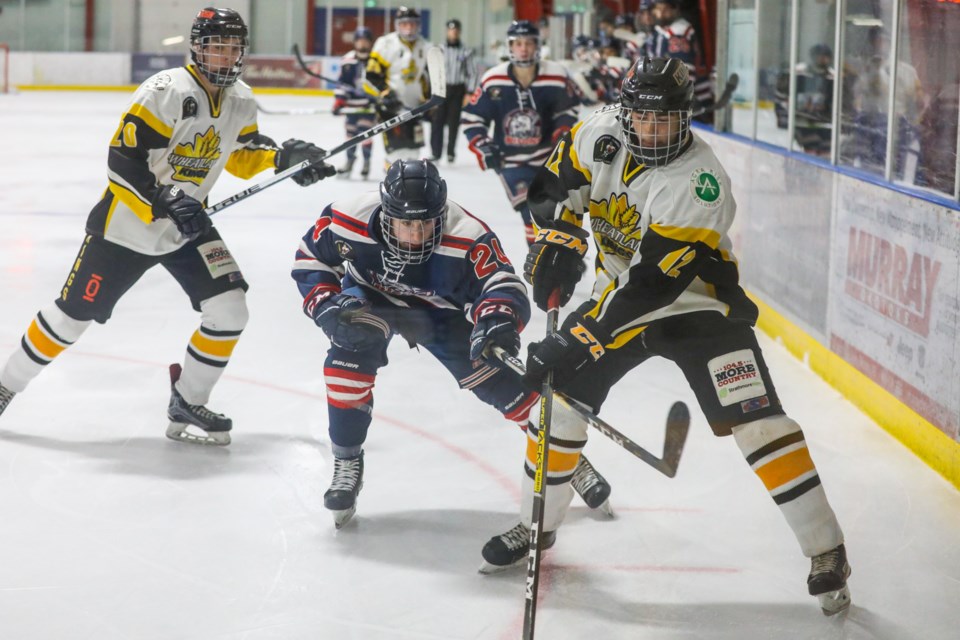 A season of stops and starts continues to mire the Heritage Junior Hockey League.

With new restrictions on team sports announced by the provincial government on Nov. 12 to combat the spread of COVID-19, all HJHL activity is restricted for a two-week period with the Okotoks Jr. B Bisons only able to get in two of its first five games of regular season action.

“Obviously we’re disappointed to not be playing,” said Bisons head coach Chris Beston. “It’s frustrating on every end of it. Especially the kids, it’s your rookie year and you want to play junior and even for our vets it’s their last year.

“We don’t know when we’re getting back going. They say Nov. 27, but nothing is curbing the situation right now so I can’t see them letting us go back.”

The Bisons, who announced they had a player test positive for COVID-19 on Nov. 5 and cancelled its subsequent games that weekend, were scheduled to get back on the ice on Nov. 22 in Vulcan against Lomond.

Their next scheduled game following the restart would be Nov. 28 in Vulcan.

Okotoks has not played since its opening weekend home-and-home set with the Strathmore Wheatland Kings on Oct. 31 and Nov. 1.

“I don’t know what’s going to happen — are we going right back into games?” said Beston. “Are they going to force us to go right into games or are we going to be able to practise a week before we get going?

“I would like to have a practice, our guys wouldn’t’ have had a practice for three weeks now.”

Beston said he’s concerned the measures will have ramifications on the team’s roster.

“We have been waiting to get back skating again and now this happened, we haven’t seen the team, it’s basically been through texts messages and emails that we’ve been communicating,” Beston added. “Overall, everyone is frustrated with the whole scenario and I don’t blame them. There’s nothing they can do, it’s out of everyone’s control, it’s a frustrating thing to stop and go.

“I wouldn’t be surprised if we lose some players because of this.”

Hockey Alberta announced that the restrictions on team sports would affect virtually every league in the province, save for the Alberta Junior Hockey League as well as the ACAC at the collegiate level.

The two-week pause on team sports applies to Calgary and Edmonton and its surrounding areas as well as Red Deer, Lethbridge, Grande Prairie and Fort McMurray. The measures are also in place in all communities on the enhanced watch list – including Okotoks and Foothills County.

“To be honest I think they’re punishing the wrong people,” Beston added. “I get pretty frustrated when I see minor hockey kids that can’t play, they’re not the ones in my mind that are spreading this. It’s other areas that are causing the spread of COVID.

“Minor hockey kids, I think it’s one of the safest places to be, we maintain a social distance, we are in a cohort and follow all the regulations.

“It’s just a frustrating time for everybody.”

In a league release on Nov. 13 HJHL president Gilbert Renaud outlined the impact of the measures.

“This decision, effective immediately, applies to all HJHL teams, not just the immediate six impacted by the Alberta government regulations. Of the seven games planned on Sunday, Nov. 22 (our next series) … only two games could have proceeded anyway.

“We have reached this decision after studying many angles including, but not limited to … cost for referee assignors (and shortage of officials), internal logistics of re-organizing the schedule, limiting non-essential travel, and the fact that we have dealt with COVID-19 cases on three of our own teams.
“The safety of all participants in the Heritage Junior Hockey League remains paramount, as it has throughout the Return to Hockey process.”