Positional competition and the return of local talent have defined a busy preseason.

The early returns have been positive for the Okotoks Bisons with main camp and exhibition play kicking off last week for the Heritage Junior Hockey League squad.

“Most of the guys that could comeback have,” said Bisons general manager Ryan Rarick. “And some of the 20 year old local kids have comeback that played in B.C. for a couple years.

Okotoks opened exhibition play on the road on Aug. 28 and edged the Cochrane Generals by a 6-5 score in a shootout.

“I thought we were a little bit rusty,” Rarick said. “But I thought their goalie actually played really well and possession of play was really in our favour.

“At the start of the game, I don’t think Cochrane got out off their end the first five, six minutes of the game. 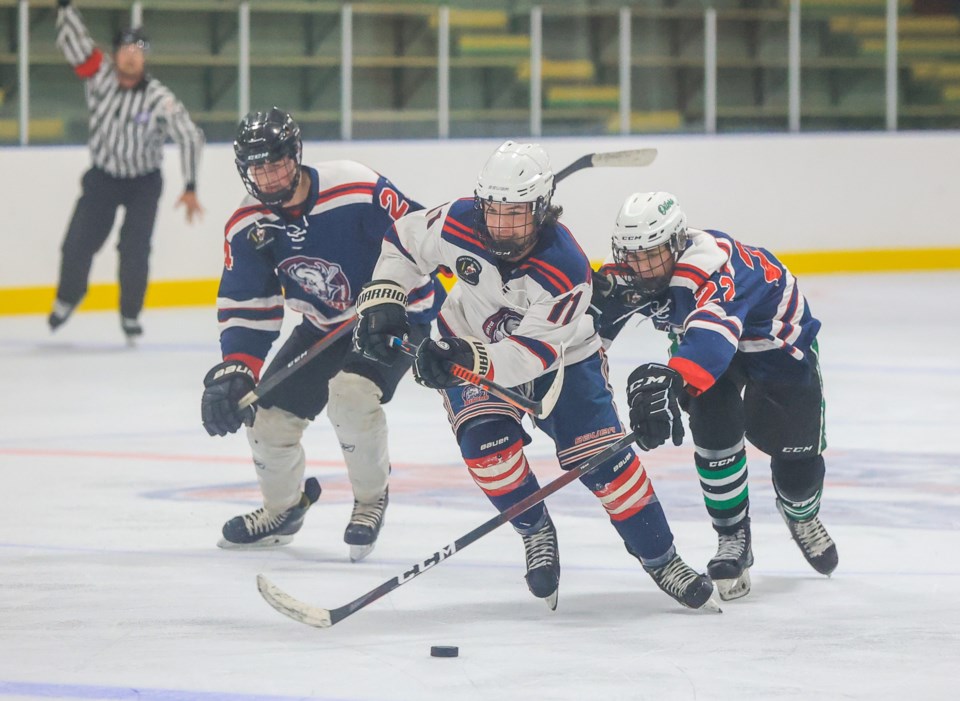 Scott Brown cuts through the neutral zone during the Okotoks Bisons main camp on Aug. 26 at the Murray Arena. (Brent Calver photo)

The structure of the preseason saw the Bisons jump from three days of main camp Aug. 24-26 into game action with two more contests versus the Generals at home on Aug. 31-Sept. 1 and another trip to Cochrane on Sept. 3.

“We’ve got three more exhibition games here to work off more rust, but we really need some practice time,” Rarick said. “We’ve skated for probably a month and a half prior to our camp, we had a lot of kids come out and looked at them there.

“But it’s really hard to evaluate until you see them in a game setting. You can have intra-squad games and whatnot, but the intensity is up quite a few notches once you’re actually playing an actual game.

“It does help for evaluation purposes, for sure.”

That’s helpful for a Bisons brass faced with some tough decisions.

It’s a clean slate in goal with stalwart Devin Reagan aged out of the program and his partner in the crease Casey Thomson now living in B.C.

A group of 2003-born netminders in Dylan Fries-Abel, Layton Draper, Josh Feddema and Cole Sabourin are competing for spots along with 2001-born Colton Robinson.

“The goaltending situation will play itself out here over the next week,” Rarick added. “Those guys are battling for the spots on the team.”

Up-front, the Bisons will be boosted by the addition of Jaevon Buschlen, an Okotokian who played the past two seasons with the Jr. A Oilers, along with Bow Mark Oilers graduate Alaister Standen, who plied his trade last season with the SJHL’s Kindersley Klippers.

“Forward, there will be a couple open spots with guys coming in battling for,” Rarick said. “And we might have some kids that fall back from Jr. A, but we’ve got a good group of local kids. I think were going to have somewhere from 18 to 20 kids from our area hopefully on the club this year.” 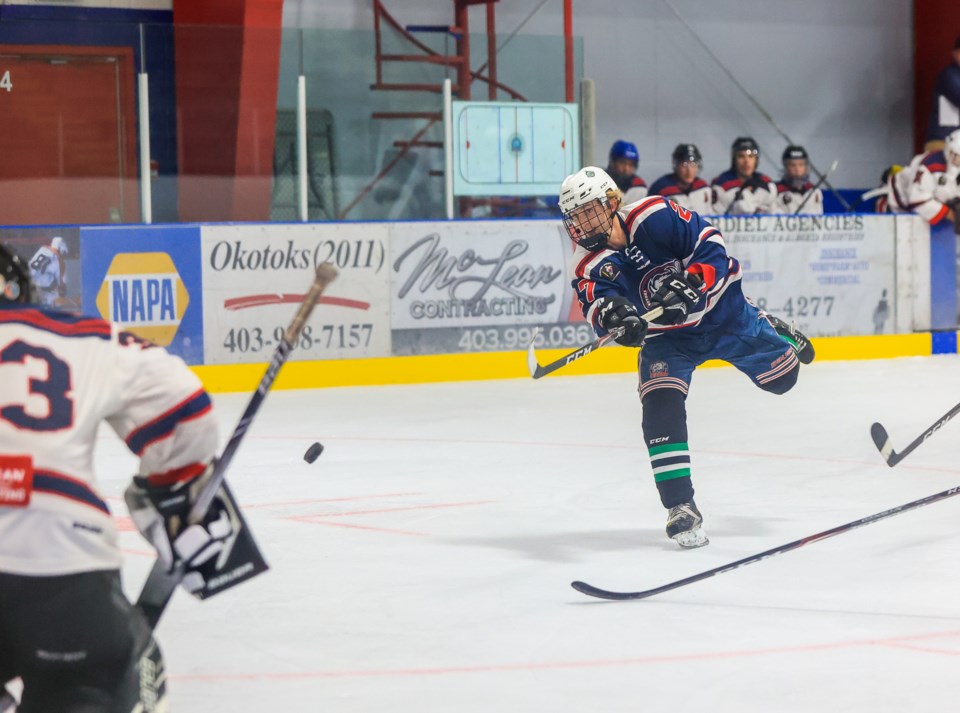 Jakob Mather fires a shot on goal during Okotoks' main camp on Aug. 26.

The Flyers return to the league after not being involved in the 2020-21 season. That along with the addition of the Kainai Braves has the HJHL at eight Southern Division teams and 16 in the league as a whole.

“It’s good for the league,” Rarick said. “The key is for the teams to all be competitive. There’s so many places now for these kids to play that you really have to work hard to sell your program.”