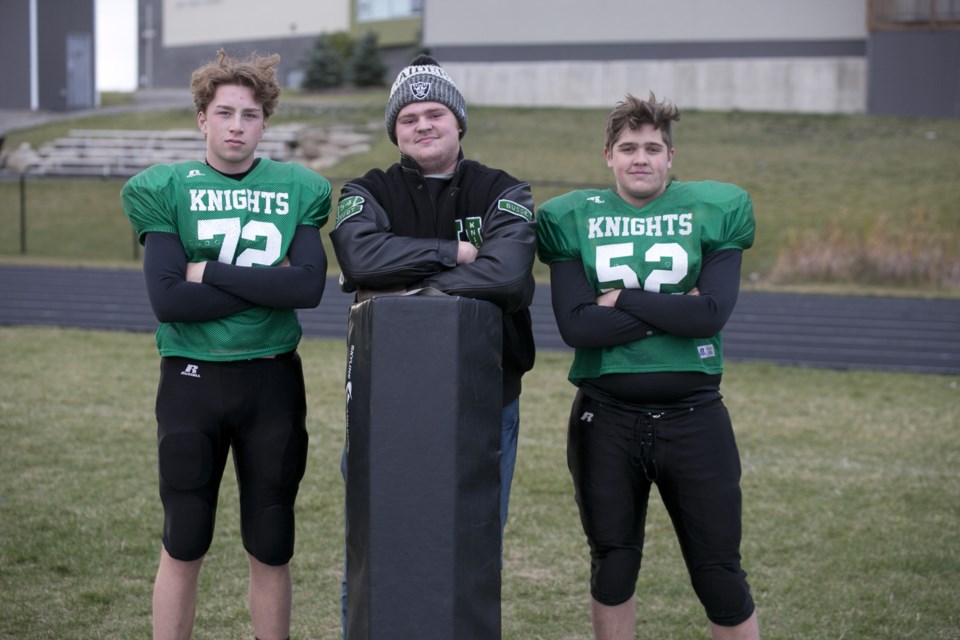 The Holy Trinity Academy Knights offensive line has not given up a sack so far in their 4-0 season. From left, are Andrew Rowan, LT; Malachi Busse, RT, and Jackson Thomas, LG. Missing are centre Hunter Smethurst and RG Dominic Fincaryk. (Bruce Campbell/Western Wheel)

The leader of the Holy Trinity Academy Knights' high-octane offence knows he’s got some awfully big boys who have his back.

In fact, those boys make sure QB Ben Leggett doesn’t end up on his back.

“Our offensive line doesn’t get enough credit–I have not been sacked this season,” Leggett said. “Our O-line gives me enough time to get the ball off to the receivers–getting those deep passes to the receivers it wouldn’t be possible without them.

"I can go through my reads, that three seconds they can give me really helps.”

Like most O-lineman the HTA starting five of Andrew Rowan, left tackle; Jackson Thomas, left guard; Hunter Smethurst, centre; Dominic Fincaryk, RG; and Malachi Busse, RT, is a humble bunch. After all, when was the last time you saw a guard do a celebratory non-sack dance? But they know they play a key role in HTA being 4-0 and no. 1 in the Tier II rankings.

Rowan plays defensive end as well for the Knights. The Grade 12 student celebrated a 100-yard TD on a fumble recovery earlier this season at DE, but he said the role of an offensive lineman is a bigger one than his being on the other side of the ball.,

“They protect the quarterback – they are the heart of the team,” Rowan said of the O-line.

“Without the O-line nothing can happen — we’re the ones that lead the runningbacks to the holy land, the end zone,” he said. “We’re the ones giving the QB the time to pass to the receivers.”

They silently revel in the fact Leggett hasn’t been sacked this season.

“We are doing our job pretty well,” Thomas said. “He got sacked a couple of times last year and you feel pretty bad. It’s probably the worst feeling on the field next to losing.

Thomas is a quick learner. The Grade 12 student started football in Grade 11 after being recruited by O-line coach Kevin Crawford after a computer class.

The O-line’s job is like HTA receptionist Nancy Endersby’s work – often she gets the school day started and only the experts really notice how well things are going.

“You know you have done a good job when you’re watching film and coach (Crawford) will give you a tap on the shoulder and say ‘good job’’’, Thomas said.

“In the game, the best thing is when you see a runningback get 20, 30 yards down the field, Scot free. You know you made a big block for him.”

“It’s one of the best feelings on the field,” He said. “When the play comes between me and the right guard Dominic Fincaryk, it’s pretty sweet. We do a cross and it means we did our job correctly.”

Of course, there are times when an offensive lineman is front and centre. Like when the official says: Holding offence, ten yards, repeat first down.”

It’s enough to make HTA Knights head coach Matt Hassett (a former d-lineman it must be noted) yell: ‘What number? What number? ‘ to find the guilty Knight.

“We had a lot of penalties in the Comp game,” Thomas said. “We have to learn from it.”

Rowan said the worst penalty is when he is offside.

“You realize you’re are the one who messed up the entire play,” Rowan said.

Fortunately, that doesn’t happen too often.

“These guys are really good,” Crawford said. “They are athletic. They’re not the biggest often when we play the other two teams, but they work hard and very coachable.”

Leggett knows that every good quarterback has a good line in front of him. He said the whole play starts with centre Smethurst, who provides a perfect snap before throwing some big blocks.

Although Leggett is quick to sing the praises of his line, he’s not so fast to pull out the wallet. He’s a student after all. Leggett is foregoing the pro QB tradition of taking the guys that protect him to dinner.

“I don’t have enough money,” he said with a laugh. “They’re pretty big guys.”

The Knights put their undefeated record on the line next week, when they travel to Red Deer to take on the No. 3 ranked Hunting Hills Lightning on Friday at 5 p.m.

For full rankings go to footballalberta.ca