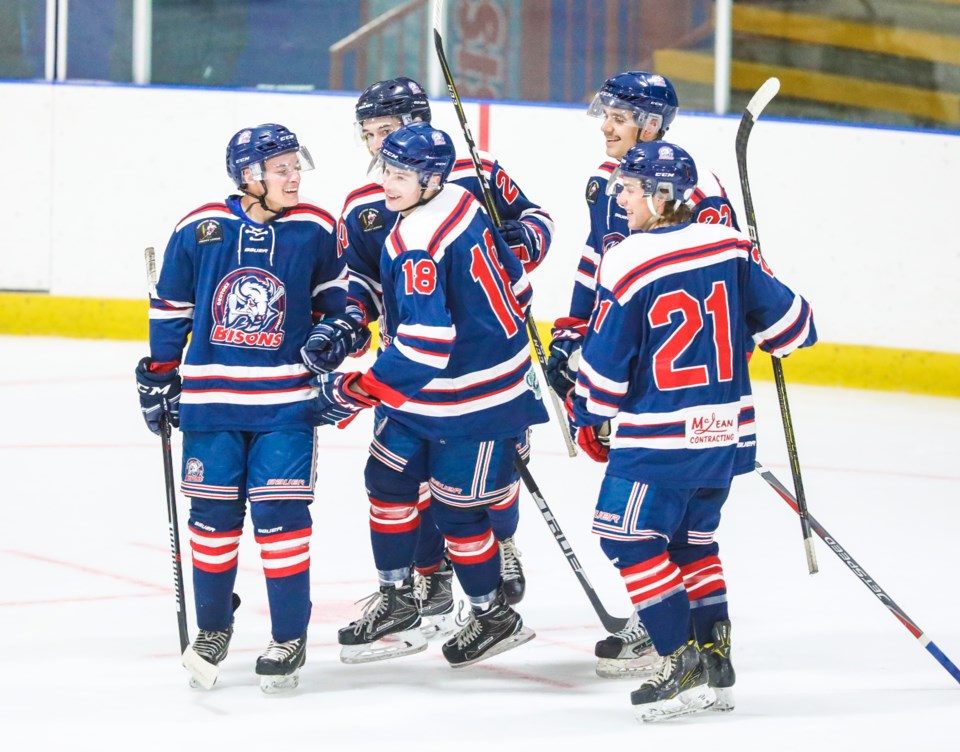 Austin O'Bray, middle, had two goals and four points in the 6-3 win over the Rocky Rams on Nov. 16 in Rocky Mountain House. (BRENT CALVER/Western Wheel)

Different players continue to step into the spotlight for the undefeated Bisons.

The Okotoks Bisons extended their winning streak to 19 games in the Heritage Junior Hockey League following a 6-3 triumph in their first trip to Rocky Mountain House and a 9-1 romp over the Northern Division powerhouse Colts in Didsbury.

“That’s the beauty of our team this year – the depth,” said Bisons head coach Chris Beston. “We score by committee, it’s not one line that carries everything. Any line can do it any night and everybody seems to be sharing the duties right at the moment.”

With 124 goals in 19 games it’s a committee that is getting things done.

Centre Austin O’Bray paced the offence in Okotoks’ victory in Rocky over the expansion Rams on Nov. 16.

Evan Woods and Tyson Scott each added a goal and an assist with Brennan Schwark and Tyler Witzke also scoring. Mitch Wolfe contributed three helpers from the back-end.

“It was a good experience, they get good crowds up there,” the coach added. “They’re a hard working, hard-nosed team and we had to fight through a little bit of adversity, they come at you hard. And we managed to sneak away with two points.”

Okotokian Matt Baba made 33 saves on 36 shots and added an assist for good measure while picking up his second win of the season.

“Matt played well again,” Beston said. “He’s a goaltender that we think highly of and he made some good saves at key points, it could have gone either way that game except for Matt bailed us out a couple times and kept us in it.”

Okotoks opened the weekend with a statement 9-1 win over Mountain View, the second seed in the Northern Division.

“The boys played really well,” Beston said. “We came out to a slow start, but again battled through it and second and third were really strong. We capitalized on our powerplays and I’m happy with the overall performance.”

Laduke is riding a red-hot stretch with 8 goals and 12 points in his past five games and has found a home on a line with Stewart and Thiessen.

“We knew what kind of talent he had,” Beston said. “He kind of got off to a slow start just because we were moving him around lines a little bit, he’s found a rhythm here, got more ice and is capitalizing on all of his opportunities.

“He’s a kid that’s very offensively talented and he’s got good speed and it’s just finding the right fit for him. He can adapt to play anywhere, but he’s coming into his own now.”

Devin Reagan improved to a ridiculous 17-0 with a .940 save percentage with the victory, turning aside 41 of 42 shots.

“He’s, I think, the best goalie in the league,” Beston said. “He makes the saves in key times when you need it to keep our momentum going or to change the momentum around.

“He’s a key part of our success that’s for sure.”

At 19-0-0 the Bisons are 13 points clear of the Cochrane Generals atop the Southern Division. The club is also inching closer to the franchise record 27-game winning streak established in the 2005-06 campaign.

“If we lose, we lose, if not that’s awesome, but we’re just trying to put 60 minutes together every night.”

This week Okotoks is home to the Lomond Lakers on Nov. 22 and travel to Ponoka for a clash with the Stampeders on Nov. 23.