"Being able to separate ourselves in the off-season, I feel like that’s going to be an advantage once this hopefully blows over."
May 21, 2020 8:00 AM By: Remy Greer 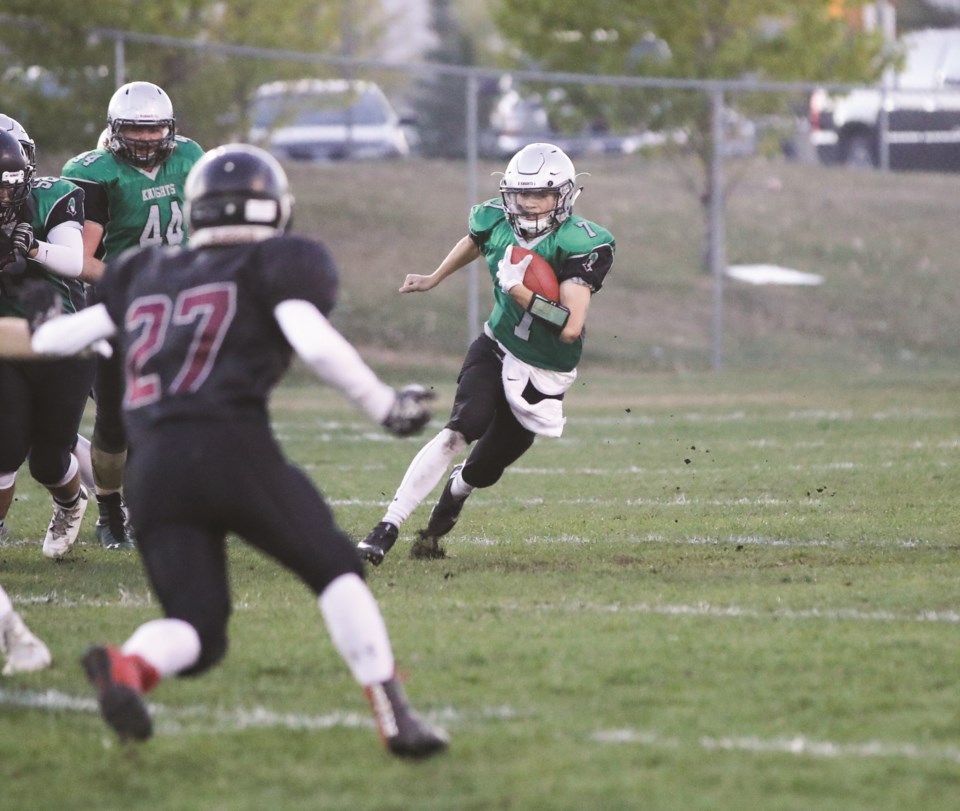 Julian Jenkins, HTA football alumnus, said the offseason training during the pandemic can be a big difference maker for himself, a UBC Thunderbirds recruit. (Brent Calver/Western Wheel)

It’s not quite open season on training for athletes in the absence of field of play.

Amid the COVID-19 pandemic, elite athletes are largely confined to home and isolated workouts using both what’s available in front of them and what can be followed through online to stay sharp and keep grinding for the eventual resumption of competition.

For University of British Columbia bound football player Julian Jenkins having access to a home gym during the pandemic is not something to be taken for granted.

“I’m fortunate enough to have a home gym set up. I don’t have everything that I would have at a normal gym,” said Jenkins, a receiver and kicker. “But I do have the Olympic weights and all of that stuff and I feel like that kind of gives me an edge over some of the people that may not have that at this moment.”

Jenkins, a 2018 graduate of Holy Trinity Academy pursuing a career in sports management, is hoping to use the summer months to make an impact once football returns to the gridiron.

“So being able to separate ourselves in the off-season, I feel like that’s going to be an advantage once this hopefully blows over,” he said.

For hockey players the task of staying in shape in the absence of ice-time has been challenging at the best of times.

“It’s just push-ups and sit-ups at home,” said Okotoks Jr. A Oilers captain Louis Jamernik. “June 1, we’re hoping to start up out in Chestermere with Reid (Hnatowich), our skills coach, doing some stuff.

“There’s a bunch of smooth areas where we can throw on some rollerblades and get working on some skills and simulate on-ice stuff as best as possible until it actually opens.”

For former Oilers captain Kyle Gordon, who had to navigate a transfer from York University after the University of Lethbridge discontinued its hockey programs in April, it’s about making the most of what’s available.

“The skating (part) sucks, there’s nothing you can do about that,” said Gordon, an Oiler from 2016-19. “As soon as that opens up I’m sure kids will be going nuts on the ice, but other than that I’ve got an okay set up at home. I might be more fortunate than others, I’ve got a full dumbbell rack and a bench.

“I don’t have any barbells or anything like that, but I can get the body-weight and dumbbell workouts in and when it’s really nice out, go out for runs or sprints. It does suck because you don’t have some of those things you want in the gym, like a squat rack, but you’re making the best of it.”

Though timelines change on a daily basis during the pandemic, the athletes are training for a resumption of athletics to begin with the fall semester, knowing full well it’s a fluid situation with a ton of moving parts.

“There’s been no official word,” Gordon said. “I’m still trying to figure out the application and course picking side of things. I do know from chatter from schools here and coaches here that everyone is preparing for a September season start, to be professional and everyone would.

Okotokian Brogan Mior, an All-American rugby player for the Harvard University Crimson, saw her sevens rugby campaign halted due the pandemic in mid-March with the Ivy League school sending its students home.

“Online schooling definitely poses its challenges,” she said. “It’s hard working from home when there’s so many distractions and it’s hard to stay motivated, but there’s been a lot of support from my team and my family an our coaches. It’s been an easier transition than what I thought it was going to be.

“But I’m happy that online schooling is coming to an end.”

In lieu of in-person training, the Crimson athletes are keeping connected with virtual training sent out by the coaching staff. Though some exercises are calling for unusual workout equipment from towels to cans, it’s primarily body-weight work being done.

“Before we were having team workouts twice a week, one speed and agility session once a week and our coaches have been really great about sending out programs, stuff for us to do at home,” she said. “I’ve been able to do it in my basement and in my backyard. There’s mobility stuff we also do that we can access online.

“So basically our coaches have been great resources and have provided us with a bunch of information for us to be able to continue to improve and maintain our strength and skills.”