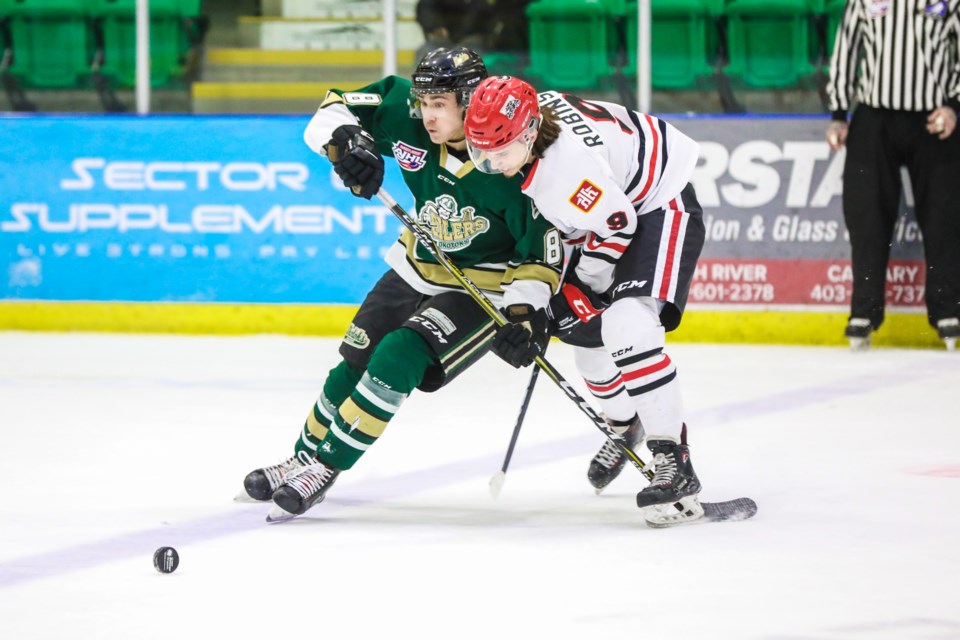 Okotoks Oilers forward Brayden Morrison and Whitecourt Wolverines centre Bjorn Robinson jostle for possession during the 2019-20 campaign. The 2020-21 AJHL season has been postponed amid mass gathering restrictions due to the COVID-19 pandemic. (BRENT CALVER/Western Wheel)

Puck drop for the Alberta Junior Hockey League’s 57th season will be delayed.

The league announced on Aug. 14 the regular season for the 2020-21 campaign will be postponed from its start in September and launched a development season starting Aug. 31.

“The reality of our regular season is it’s based on the ability for competition and people in our buildings,” said AJHL commissioner Ryan Barotshyk in a phone interview with the Western Wheel. “So with current restrictions on mass gatherings and interactions between sport cohorts it really ultimately didn’t allow us to start a regular season.”

The Okotoks Oilers, the top-team in the South Division in 2019-20, were slated to kick-off the regular season on Sept. 18 in Olds with its home opener the following night at Pason Centennial Arena.

With Alberta’s relaunch at Stage 2, allowing a maximum of just 100 people to gather for indoor/seated audience events, the AJHL regular season is simply not feasible at this time.

“We’ve been having some good dialogue with Hockey Alberta, directly with the premier’s office and Alberta Health as well, and I’m very appreciative of that dialogue,” Barotshyk said. “We came to the point where we realized we can’t start out regular season and had to pivot here to this development season.”

The development season will allow for training camps for the league’s 15 teams to get going as early as Aug. 31 and will continue indefinitely until the regular season gets underway.

“Everyone is anxious to return, athletes and coaches and staff are looking for options,” the commissioner added. “The reality is guys are training right now, guidelines allow kids and athletes to skate so we really look to this opportunity to take advantage of the existing guidelines and bring our guys in. The reality is our league is the top development piece in the province as far as what we can provide right now for our athletes.

“As a league, we have to respect the government guidelines and what’s allowed, but this created an opportunity here for us to focus on development and hopefully build in the anticipation for our regular season.”

Additionally, the league is planning for exhibition play to begin within the development season once rosters are reduced following camp and provided they meet the health guidelines.

“We’ll work through those phases starting today and hopefully get to that point where we can at least get some competition and move towards the opportunity for potentially a regular season,” Bartoshyk said.

Other leagues, including the BCHL, have gone ahead with delayed start dates until December. Bartoshyk said with how fluid the situation is the AJHL didn’t want to put a set date out there.

In the interim, the league will continue to examine possibilities with physical distancing measures in place at arenas that vary considerably in size and capacity across the province.

“Given the differences in our facilities and what the possibilities are as far as the number of people you can have with social distancing and potentially people wearing masks – that’s part of the process now, we can work on some schematics of our facilities,” Bartoshyk said. “And present the opportunity where you have x amount of people in the building and this is what it looks like.

“That’s part of the discussion right now. Given the anticipation of school’s opening, I think that’s going to be a bit of a measuring stick for everyone to see how that goes with the safety guidelines in place.”

The AJHL stated the league will be poised to immediately resume regular season play when the provincial health regulations allow.

“It’s new for everyone and every part of our society is experiencing this at the same time,” Bartoshyk said. “And I think it’s important for us to have candid and honest conversations at the league level and understand we’re still working within a system where there’s provincial health guidelines and restrictions placed on us and we have to operate within those and yet bring our guys in and develop our athletes.

“Safety is of highest concern and we’re following those guidelines and pieces and going from there.”

More to come on this story.