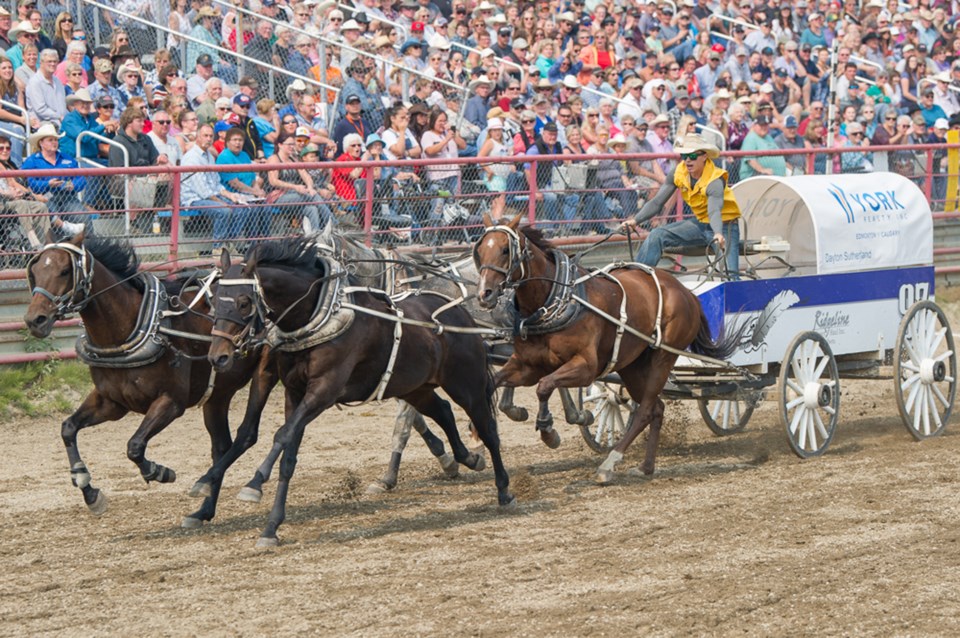 Dayton Sutherland, here at the 2018 Battle of the Rockies, successfully defended his title on Aug. 19 in Rocky Mountain House.

Rocky Mountain House might just be where Dayton Sutherland wants to live for the rest of his life, because it’s a community where the Foothills Composite grad always seems to hit paydirt.

Sutherland won the Battle of the Rockies chuckwagon championship for the second consecutive year on Sunday. Not bad for a guy who wasn’t even on the World Professional Chuckwagon Association circuit two weeks ago.

“There was a retirement on the circuit, so I got to fill a spot,” said the 21-year-old Dayton.

Sutherland was on the Western Chuckwagon Association tour, where he is sitting eighth in the standings before he moved to the big leagues – the WPCA – for the Battle of the North in early August at Dawson Creek. Although he did okay there, no one was expecting Sutherland to win in Rocky the following week.

Turns out, not only has he inherited his dad Mark and granddad Kelly’s champion genes, Dayton got to borrow a few of their horses too.

“I ended up driving an old leader I had the first year I drove that dad had and I drove one of grandpa’s old horses that dad bought,” Dayton said. “I filled some holes that I had in the Westerns (tour). I always had these good horses, I needed a good leader on the 3-4 barrel and I borrowed dad’s good one.”

The 21-year-old Dayton also had timing on his side. He was in the first heat with the lower-seeded drivers. That allowed him to get out in front and stay. He won each of his four heats by at least 2 ½ seconds.

“I was in the first heat and I was able to out-turn them every single night,” he said. “I had an advantage left, right or centre, and I got to take advantage when I can get it.”

Meanwhile, the track slowed down for the big boys like Mark Sutherland, Jason Glass, Kurt Bensmiller, Jordie Fike and company.

“The track got quite a bit slower for the later heats and that gave me quite a good cushion,” Dayton said.

But they don’t just hand out championships. Dayton didn’t knock over any barrels or take any penalties.

It’s all part of learning and nothing can be taken for granted — not even his spot on the WPCA.

Sutherland wil go to Dewberry for the WPCA runoff at the end of the season.

He expects at least 13 drivers to compete for the six spots on the tour for 2020.

Foothills drivers Mark Sutherland and Blackie's Jordie Fike finished in the top 12 of the world standings after Rocky and will now qualify for the Century Downs World Finals in Balzac next weekend.

The 12 qualified drivers will race in the final three heats over the first four nights at Century Downs with their specific heat determined by their point standings going in. The 12 finalists will be under a playoff point system with points awarded based on daily running times and their playoff aggregate time.

The four finalist after three nights will then compete for $50,000.

The world champion, however, will be the point leader after the WPCA season which concludes at Century Downs.