Young offenders help give back to community

Youth Justice Committee of Okotoks donates $6,000 to its community partners who help rehabilitate and educate youth.
0
Nov 9, 2019 8:00 AM By: Krista Conrad 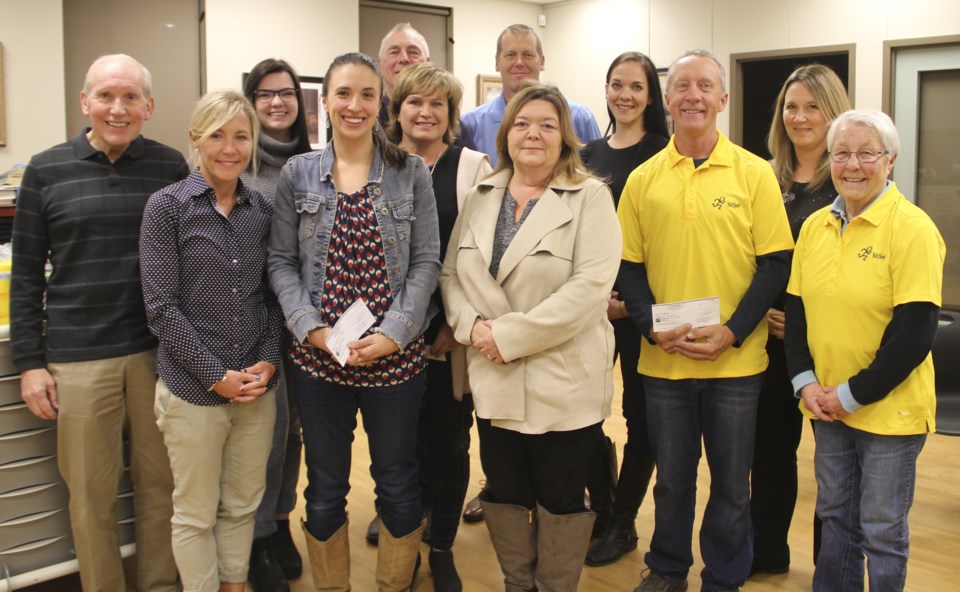 Members of the Youth Justice Committee of Okotoks gathered Nov. 4 to give $1,500 donations to four groups: KidSport Okotoks, It Takes a Village Okotoks, Boys and Girls Club of the Foothills and St. Luke's Outreach School.

Sometimes justice comes in the form of giving back to the community.

That’s how the Youth Justice Committee of Okotoks prefers to handle the eight to 35 cases it takes on each year, encompassing youth referred directly from the RCMP or by a judge’s orders at the provincial court.

Committee president Leah Carter said the alternative measures program helps hold youth accountable for their actions. If a youth is successful, he or she is sent back to the RCMP or court and will not have a criminal record, she said.

“We try to make the consequence give back in some way to the community, through community service, donations, volunteering,” said Carter.

The $7,000 annual funds for the Youth Justice Committee come from Alberta Justice, she said. However, for some time the balance of money not used over the course of a year began piling up, so the committee decided to put it to good use in the community.

“We decided to give it out,” said Carter. “We’re giving back to the groups that are already in the community doing great stuff, ones we are partnering with.”

This year, the committee gave $1,500 each to the Boys and Girls Club of the Foothills, KidSport Okotoks, St. Luke’s Outreach School and It Takes a Village Okotoks.

The Boys and Girls Club was a natural fit, as many youth are referred to the program to complete their community service hours, she said.

Shirley Puttock, CEO of the Boys and Girls Club of the Foothills, said the organization is grateful for the financial support. The club is 25 years old and boasts daycares in Black Diamond, Nanton and High River, as well as clubs in each community in addition to the Crowsnest Pass and, most recently, Eden Valley.

“We love working with the youth who come from Okotoks Youth Justice,” said Puttock. “We give them some skills but we try to build up their confidence and I think most of them have felt good when they leave us.”

She said the children who youth are working with adore teenagers and the positive reinforcement they receive helps bolster their self-confidence.

One young man who went through the youth justice program ended up working with the Boys and Girls Club as a summer student after doing his community service, she said.

“He was fantastic – he showed up, he had a good work ethic, learned a lot of new skills, made a lot of friends,” said Puttock. “I think that was great for him.”

Carter said some youth, when asked how they spend their free time, admit they don’t play sports or belong to dance groups or arts classes because of the cost.

Youth Justice partners with KidSport and makes referrals to the program, which pays up to $400 in fees per child per sport for qualifying families, she said. They also have some offenders make donations to the organization directly as part of their consequences, she said.

The $1,500 donation will help get four children on the ice or field, said incoming KidSport president Glen Gorrie.

“There is a correlation between prevention, success and sport, and we see that,” said Gorrie.

He said KidSport, which will celebrate 25 years in January, helps about 100 Okotoks families per year to the tune of about $60,000.

Marg Cox, also with KidSport, said the organization has broadened its scope to now help families with more than just the typical hockey, soccer and baseball.

“We can do dance classes and some art classes,” said Cox. “As long as it’s a registered program, recognized with a certified instructor, then we can manage that.”

For St. Luke’s Outreach School, $1,500 goes straight to bursaries for students moving on to post-secondary education.

The CTR Catholic school, which began as an outreach program for at-risk youth with behavioural issues, now also caters to students dealing with mental health needs and other issues as well.

“These are kids who are not successful in our traditional schools for a number of reasons,” said principal Leslie Woehleke.

She said the school has received money from Youth Justice for a few years.

“Some of our kids here do go to school after high school, so that’s where the money goes is for kids who are in financial need and trying to get their post-secondary education,” said Woehleke.

Carter said the committee is happy to help St. Luke’s, as some of the youth who attend the school have also gone through the program and it’s a nice way to support them in their studies.

This was the first time the Youth Justice Committee donated to It Takes a Village, a relatively new organization in Okotoks with just five years under its belt.

The organization provides baby essentials for families in hardship, which can include clothes, diapers, wipes, snowsuits and sometimes even car seats, strollers, cribs and formula.

“Our idea is at least when parents have new babies they don’t have to worry at least about diapers and wipes and things like that,” said founder Rachel Swendseid.

New to the program is a drop-in service, where parents can come to a storage unit on Thursdays and choose clothing and other needs for their babies themselves, she said.

They’ll be looking to Youth Justice for volunteer help, so teens can complete community service hours stocking the storage unit and sorting donations and purchases, she said.

“We’re 100 per cent volunteer-run,” said Swendseid. “We hope we can partner more with Youth Justice and help our local youth who are giving back to the community.”