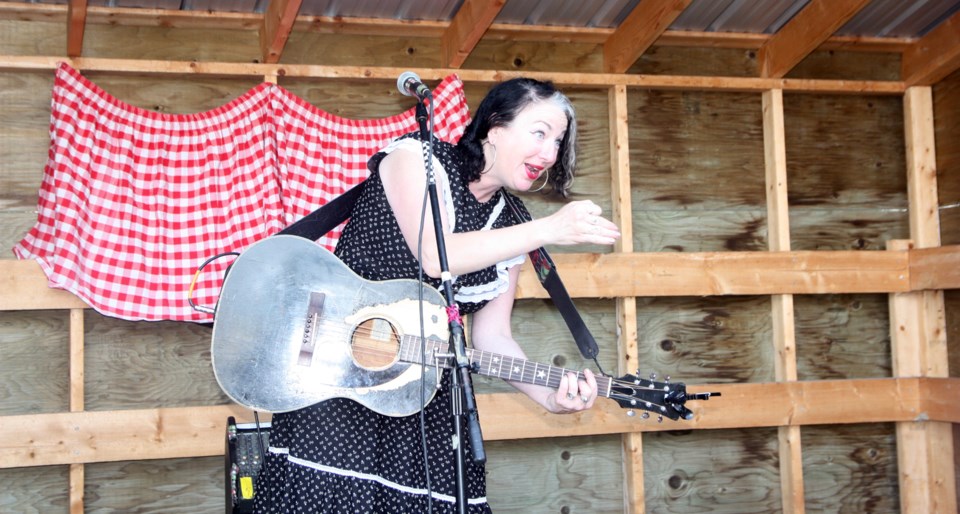 An eclectic country singer had the chance to perform her unique and talented style at an outdoor setting in Black Diamond ideal for her performance.

“I have been here maybe seven times, I love it,” said Victoria’s Carolyn Mark prior to stepping on stage at The Westwood on Friday night. “This is the first time I have played their outdoor stage.

“When you are playing outside, it’s a high.”

Marks played an energetic set in front of an appreciative crowd, with a few patrons enjoying maybe a pint of locally brewed craft beer or a glass of wine.

“This is the kind of place you can kind of wing it,” Mark said.

No surprise The Westwood is known for music — it has a record collection from The Animals to Zappa upstairs.

“Music is a huge part of it — that’s what The Stop was all about, too” said The Westwood co-owner Erin Kendrick. “My husband (Chad Kendrick) was a musician in Australia for 12 years travelling around, so for us to continue live music is who we are.
“We want to bring live music into Black Diamond, have our friends, family, bring new people into the area and make them feel welcomed and love.”

New to the Westwood this year is the funky wooden stage where Mark presented her edgy Loretta-Lynn style.

“We built it at the very start of spring and the first group to grace the stage were The Tequila Mockingbird Orchestra (on July 6), we kept getting rain.

“We must have had 60 people outside," Kendrick said.

Although The Westwood and its predecessor The Stop have hosted somewhat larger names such as the Sadies, Tim Williams-Big Dave McLean and Tanya Ryan, it’s proved to be a welcoming home for those talented singers like Carolyn Mark trying to get their foot in the door.

The Westwood also hosts an open mic night, which has been hosted by Foothills area talent like Lyndsay Butler and Jake Vance.

The open mic night is usually the first Friday of the month, but changes in the summer due to musicians touring — and possibly making a stop at The Westwood.

Ashley K. a promoter in Turner Valley, and a friend of the Kendricks, helps book the acts.

“There’s a network of musicians who are touring in western Canada,” Ashley said. “Most of them I know just from going to festivals. I used to be in the scene in Vancouver and I got to know a lot of them.”

She’s been busy. The Westwood has several bookings for the remainder of the year.

The next concert is Demon Squadron on July 24.

“Everybody loves them, they are a band for everybody,” Ashley said. “They play a real mix of roots, reggae influence, a little bit of country.

“They have some of the best musicians who are touring.”

There are tentative plans to book a young band from the Black Diamond area, Taken By Sanity, in the near future. The band recently made the semifinals of the  2019 Calgary Talent Search.

For more information about The Westwood go to thewestwood.ca