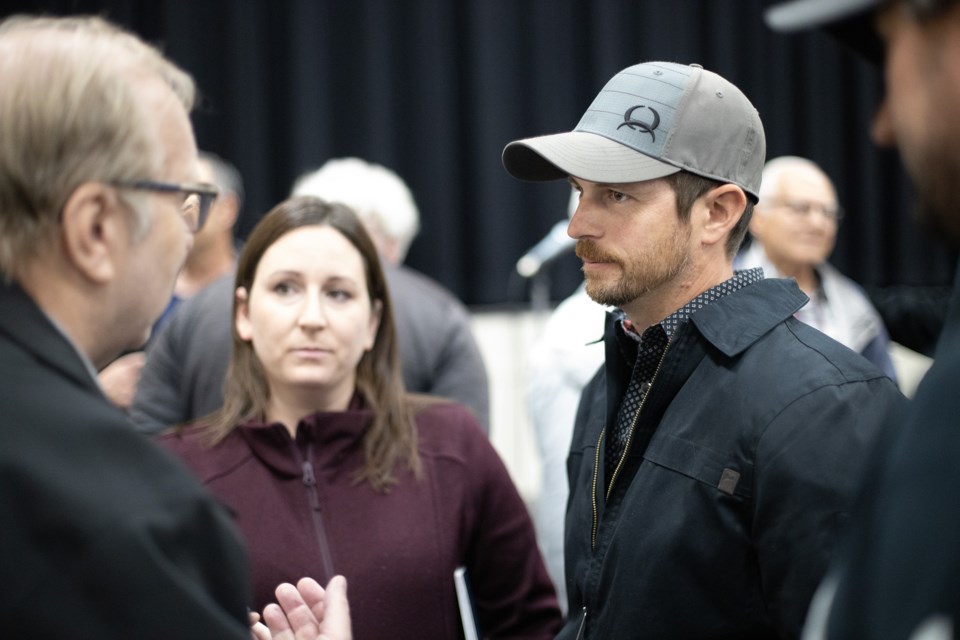 The lawsuit against Edouard Maurice for actions he took while defending his rural home south of Okotoks may be dead if proposed legislation announced by Alberta Justice Minster Doug Schweitzer goes through.

One of the proposals is an amendment to the Occupiers’ Liability Act.

“A criminal trespasser has no right of civil action against a law-abiding property owner who is defending their property and family against trespassers who are or who they believe to be in the process of committing a criminal act,” Schweitzer announced at a press conference in Wetaskiwin on Nov. 6.

The legislation would be retroactive to Jan. 1, 2018 — prior to Maurice’s legal issues taking place.

Ryan Randy Watson and a co-accused drove onto the Maurice residence south of Okotoks at around 5:40 a.m. on Feb. 24, 2018. They rummaged through the Maurices’ vehicles.

Edouard, who was home with his one-year-old daughter, fired a warning shot into the ground, which ricocheted and struck Watson in the wrist.

Maurice was later charged with gun offences and all charges were dropped on June 22, 2018 at Okotoks provincial court.

Watson later pled guilty to mischief and failure to comply with a court order at Okotoks Provincial Court on Feb. 28, 2019. He was sentenced to 45 days in custody, but was released after receiving credit for time served.

Maurice was served in September with papers informing him he was being sued for $100,000 by Watson for personal damages.

Maurice subsequently made a counter-claim against Watson for $110,000.

Maurice said it is too early to determine what the proposed legislation would have on either suit, but it was welcomed news.

“It’s great news for everyone in Alberta,” said Maurice, who was in Wetaskiwin. “It might not affect our lawsuit at all, we’re still going to be going forward with the lawsuits as we were planning before… it’s not going to change us at all.”

He said he doesn’t know at this point if the proposed legislation goes through, what effect making it retroactive to January 2018 will have on his case.

“Our view is it is a positive step to address issues affecting rural Albertans,” Chimuk said. “Once it passes, we will make a determination with respect on how it will have an impact on his case.”

He said the legislation may impact the counterclaim in respect to punitive damages.

“We are glad to see this government is taking steps and hopefully on a bipartisan basis,” Chimuk said. “We think it is very reasonable that everybody would agree that victims could not be sued by criminals.”

He said he would like to proceed with the court case as soon as possible, but he could not speculate as to when that would start.

“At this stage we will be taking a wait-and-see approach with respect to what the legislation is, if it passes, and take a look at it,” Chimuk said. “The quicker it passes, the better.”

Schweitzer’s proposed legislation came as a partial result of open houses concerning rural crime being held across Alberta — including Okotoks in October.

“Every rural Albertan can relate to Eddie Maurice, — are they the next Eddie Maurice?” Schweitzer said. “The feedback was loud and clear. We need to make sure we protect property rights and the vulnerability of Albertans, make sure that they are not victimized by criminals on their own property.”

Schweitzer also proposed legislation to raise the maximum fine for trespassing to $10,000 for first incident and $25,000 for subsequent offences and jail time.

Additional measures would give victims a “greater voice in the court process.”

Measures would also be taken to make it more difficult to sell stolen materials — including copper, which is sold for scrap.

As well, further responsibilities are being recommended for Fish and Wildlife officers, Commercial Enforcement Branch officers and Alberta sheriffs to respond to a wider range of calls to assist RCMP.

No timeline as to when the proposed changes will be put forward was provided.

Highwood MLA RJ Sigurdson, who is part of the Rural Crime tour with Schweitzer, said the Maurice incident set the tone for discussion at the open houses.

“When it comes down to Eddie and Jessica’s (Eddie’s wife) situation, they really shone a light on a gap in the system which exposed them to being revictimized that came in and trespassed and burglarized their property,” Sigurdson said.

“It is good to see that action is being taken. We’re listening and we are engaging at these town halls. We need to start taking real action and this is just the start. We need to continue to work on this.”

Sigurdson stressed the protection against lawsuits would be for victims who have not been found criminally guilty. He said anybody who has used excessive force and has been found guilty could still face liability.

Watson’s lawyer has not returned the Wheel’s phone call as of Thursday afternoon.