Town of Okotoks not trapping coyotes 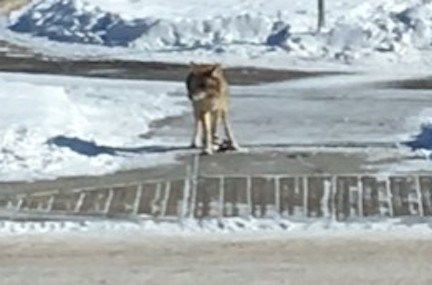 A resident took a photo of a coyote caught in a trap along the hill of the river valley in Okotoks. (Photo submitted)

Traps are not being set by the Town of Okotoks to capture coyotes, stressed its urban forester.

“We don’t do any trapping of coyotes,” Gordon White said. “Coyotes are not an issue in town unless they are acting aggressively to people or to pets.

“If we were to run into that situation we would contact (Alberta) Fish and Wildlife.”

An Okotoks resident saw a coyote with a trap on its foot last week from her home, which looks out onto the river valley. The individual had wrongly believed the Town trapped coyotes.

White said reports of coyote concerns in the community are rare.

“This year (2021) there was one report from a resident in Cimarron of a coyote that wasn’t looking all that afraid and wasn’t running away. However, it wasn’t acting aggressive, so there was no action to take,” White said. “There are certainly coyotes that use the river valley as a corridor and our parks and such.

He said the Town does receive a report of a coyote sighting now and then and unless the animal is reported aggressive no action is taken.

White said in his 14 years with Okotoks, he is not aware of any reports of an aggressive coyote in Okotoks.

As far as the trap on the coyote, it’s a burden, but White said he doesn’t believe it is causing the animal any pain.

“This is a foothold trap, which are legal traps, they are restraining traps so if you get a dog or an animal you can let it go unharmed,” White said. “It’s unfortunate somebody didn’t have a proper set up and the coyote pulled free of it.”

White speculates the coyote travelled into town after being trapped.

“Their territory is fairly large and they roam a lot,” White said. “I suspect someone on the outskirts of town in the county might have been trapping coyotes and this one got away.

“There is no evidence that it was in town, so I assume it was trapped out of town and walked in.”

Coyotes can live in the cold of Canada as well as calling large cities such as Los Angeles home. They are adaptable and there is plenty of food in Okotoks — no need for them to try and chase down a road runner.

“Their main diet is voles and mice and such, but they will take a small deer down, especially if it looks injured or something like that,” White said. “If they get into a group, two or three coyotes can definitely take down a deer.”

A coyote may not find your cat or small dog cute, it might find your pet appetizing.

“It’s very important that people in town keep their dogs on leash and their cats indoors, so we don’t attract more predators than we see normally,” White said.

He said if people do see or come across an aggressive coyote call the Fish and Wildlife Report a Poacher line.

For information about coyotes go to www.alberta.ca/coyotes.aspx

What should I do if I see a coyote?