Alberta4All executive director CW Alexander addressed about 40 people during a town hall meeting at Elks Hall in Okotoks on Sept. 26.
Sep 28, 2020 9:30 AM By: Krista Conrad 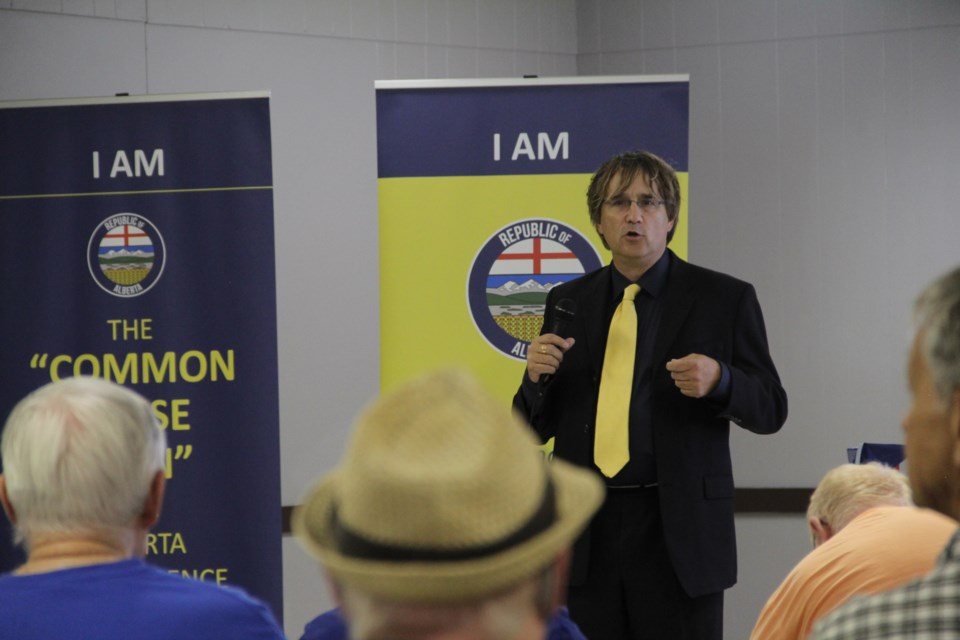 CW Alexander, executive director of Alberta4All, addresses a room of about 40 people during a town hall meeting at Elks Hall in Okotoks on Sept. 26. (Krista Conrad/Western Wheel)

About 40 Foothills-area residents came out to hear from the executive director of Alberta4All on his plan for independence within three years.

CW Alexander led a town hall meeting at the Elks Hall in Okotoks on Sept. 26 highlighting his vision for the creation of the Republic of Alberta, with a focus on representative government and the elimination of political parties, low taxation and keeping wealth in the pockets of Alberta citizens.

He started Alberta4All as a grassroots initiative to build a separatist movement in the province ahead of the 2023 election, with eyes on what he called “Independence Day” on Sept. 1, 2023.

“The whole intent is to unify Albertans under one banner,” said Alexander. “We don’t have much time.”

Part of the hurry is to get ahead of increasing immigration levels, he said. Currently the population grows by about two per cent due to immigration each year, which dilutes the “ability to make choices.”

“Immigration is affecting us every single day and every year we wait, that’s two per cent more and guess what – those people aren’t going to be voting for Alberta, they’re going to be voting for Canada because that’s what they know,” said Alexander. “I have no issue with immigration per se. I believe Albertans first needs to come down to it at the end of the day.”

One of the main motivations for Alberta4All is keeping money within the province’s borders, he said. As an independent nation the wealth of its citizens wouldn’t be sent to Ottawa each year via taxes.

About $41 billion sent east each year that could be kept in the pockets of Albertans, he said, and with other economic policies in place the republic could become the wealthiest nation per capita.

“Over time that money keeps flowing to the east and is used for political gain and voting benefit, none of which benefits us,” said Alexander.

There are several necessary steps in achieving the goals of the movement, he said, and it begins with building up Alberta4All and working on achieving autonomy for the province as far as policing and tax collection.

“We need to operate as our own country, so all these elements have to happen so ultimately we can be recognized as having the ability to operate and run a country of our own,” said Alexander. “The faster we get these things done, the better.”

It will also be necessary to form agreements with First Nations people and ensure they are onside with the separation movement in order to solidify its success, he said. It’s a move he calls “risk mitigation.”

“It would give them a degree of certainty that if we form an independence government and we vote for independence that they’ll be onside with us and there won’t be a big battler with the federal government just sending them billions of dollars trying to nullify them from playing ball with all of us,” said Alexander.

The goal would be to form government in the 2023 provincial election, and subsequently hold a referendum vote for separation on Sept. 1 of the same year, which would lead to a period of transition where trade agreements, border policies and other issues would be worked out.

Finally, the new nation would have to be international recognized as independent with a defined territory, the ability to operate on its own and a permanent population, he said.

It will be a lot of work over the next three years but Alexander said it would be worth all the effort.

“We’re bound to be better off than we are right now,” he said.

A major criticism of the movement has been that Alberta is landlocked and would suffer if cut off from Canadian shores and free travel, but he said that’s a minor issue that can be overcome.

“Borders unlock our access,” said Alexander. “We now have something to negotiate with that we didn’t have before.”

He said agreements between Alberta and other nations would be inevitable and could create a better environment for its citizens.

As an independent nation, Alberta could strike up its own trade agreements and manage its own pensions and social services, which he said would be better for people in the long-run.

“We will actually be quite prosperous in an independent Alberta,” said Alexander. “Fear is not the way to be thinking. This is about prosperity and what’s going to be great for us in the bigger picture.

“That’s not to say there’s not going to be challenges, but we can do this. Nothing’s going to change until we decide to make the change.”

Rick Scott, a member of the Alberta4All movement, said it’s time for people to step up and join the movement for an independent Alberta.

As a once-proud Canadian, he said he’s now embarrassed with how the country has changed and sees promise in Alexander’s plan, which he called ambitious but realistic.

“It’s very important we have a grassroots level rising-up in this province,” said Scott. “We want to be our own independent country. It isn’t going to change, it’s just going to get worse.”