One quarter of Okotoks and High River homes involved in a study of radon gas levels in the Calgary area found average levels near those considered acceptable by Health Canada.
Apr 5, 2017 12:00 AM By: Okotoks Western Wheel Staff 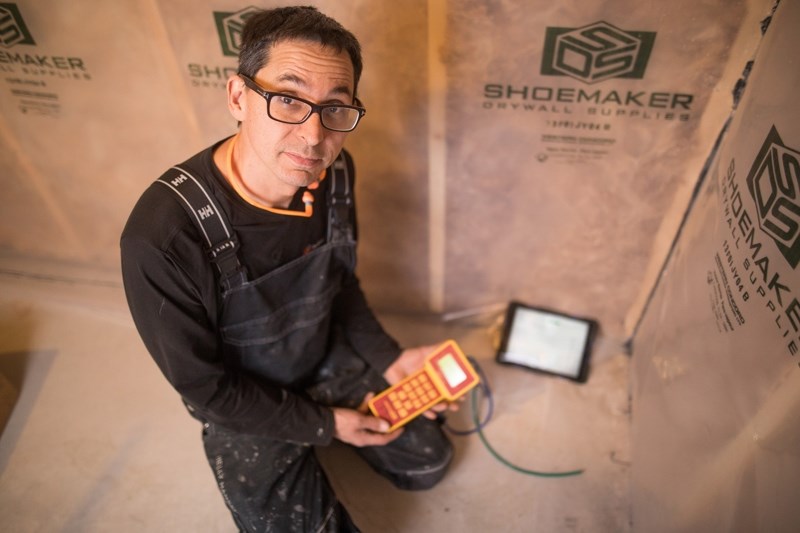 Colin Dumais of RadonWest demonstrates the air pressure testing necessary to determine if radon gas is seeping into a home.

One quarter of Okotoks and High River homes involved in a study of radon gas levels in the Calgary area found average levels near those considered acceptable by Health Canada.

Radon gas is radioactive and comes naturally from the ground and can concentrate in homes. According to Health Canada, radon is the second leading cause of lung cancer behind smoking.

The study conducted by University of Calgary scientists found an average of 194 becquerels per cubic meter (Bq/m3). A becquerel is a unit of measurement of radioactive decay. Health Canada recommendations state radon levels should not exceed 200 Bq/m3. The World Health Organization recommends levels not exceed 100 Bq/m3.

One of the report’s authors said the Okotoks results were expected.

“The concept that there’s going to be high levels of radon found in Okotoks and throughout the Foothills, that’s not a surprise,” said Colin Dumais. “It’s not a surprise to anyone who has studied radon because they know that we have the right kind of geology. We have the right kind of buildings that draw radon in, and we have a cold climate that creates the conditions necessary for radon to get sucked into a building.”

Dumais is a board member with the Canadian Association of Radon Scientists and technologists and a technician with RadonWest in Okotoks.

Homeowners and residents who participated in the study purchased radon detectors, which were mailed in for testing. Of the 2,978 people across the Calgary region who picked up detectors, 2,382 were submitted.

The study found the average reading overall was 126 Bq/m3, while 12 per cent of all homes involved had radon levels above 200 Bq/m3.

Results varied across the Calgary Region, from 117 Bq/m3 in Airdrie and northeast Calgary, to 139 Bq/m3 in Redwood Meadows. The highest levels were found in Cochrane with an average of 261 Bq/m3, and a maximum of 3,441 Bq/m3.

Dumais said the sample size used for the study was small, and more testing is needed to confirm the results and see how widespread radon levels are.

He said natural levels in the outdoors range around 10-15 Bq/m3. A reading of 200 Bq/m3 in a home is like getting one dental X-ray per day, he said.

“That’s quite a bit of radiation,” he said.

The study showed higher radon levels were more often seen in newer homes. Radon levels in homes built after 1992 were, on average, 31.5 per cent higher than in older homes.

A large portion of Okotoks housing stock was built after 1992.

Rob Mueller, municipal safety codes officer, said 5,910 building permits were issued for single detached dwellings between 1994 to the end of 2016.

Dumais said the study didn’t consider the impact the typical age of homes in Okotoks could’ve had on the results. However, he said the number of houses built in town after 1992 suggests there could be a prevalence of homes in town susceptible to radon.

Health Canada recommends homes with levels higher than 200 becquerels per cubic metre be remediated to bring levels down below this threshold.

The study found mitigation work was successful at lowering radon levels below 100 Bq/m3.

It’s not an issue of contamination, or a problem with an individual home or its location.

Dumais said people aren’t often aware they can remediate their homes to bring down radon levels.

“High radon houses can be fixed,” he said.

Remediation is not simply a matter of sealing off cracks in the foundation or basement floor, though it is a necessary step. Dumais said stopping radon gas from entering a home requires creating negative air pressure beneath the structure. Work starts by sealing off cracks and holes in the foundation and concrete floor in a basement, as well as sump pumps and any other area where air can get in. The key is the installation of a pipe with a fan into the basement floor to vent outside the home above ground level.

Remediation plans need to be tailored for each individual home and the work should be done by a certified mitigator who understands the science behind it, said Dumais.

Provincial building code changes in 2014 require all new buildings to be roughed in for eventual installation of a radon fan. Older homes can be remediated, but Dumais said systems have to be designed for each individual home.

Tests are required to determine radon levels in a home and whether remediation is required.

Dumais said test kits are readily available to help determine whether a home has a radon problem. Test kits can be purchased at hardware stores and RadonWest conducts tests.

Radon monitors are available to Okotoks residents through the Town. The radon testers are included in do-it-yourself home energy audit kits the Town provides for free for short-term use. The kits can be booked on the town website at www.okotoks.ca, under the sustainability tab or by calling 403-938-8901.

Health Canada recommends long-term testing be done during colder months when doors and windows are typically closed, but it can still be beneficial in the warmer summer months. According to a Town press release, lower results can be expected in tests conducted during summer months, but a higher reading could mean further testing is required.