Students back to the classroom in fall

Education: Goal to have school as close to normal as possible without compromising safety
Jul 22, 2020 3:00 PM By: Bruce Campbell 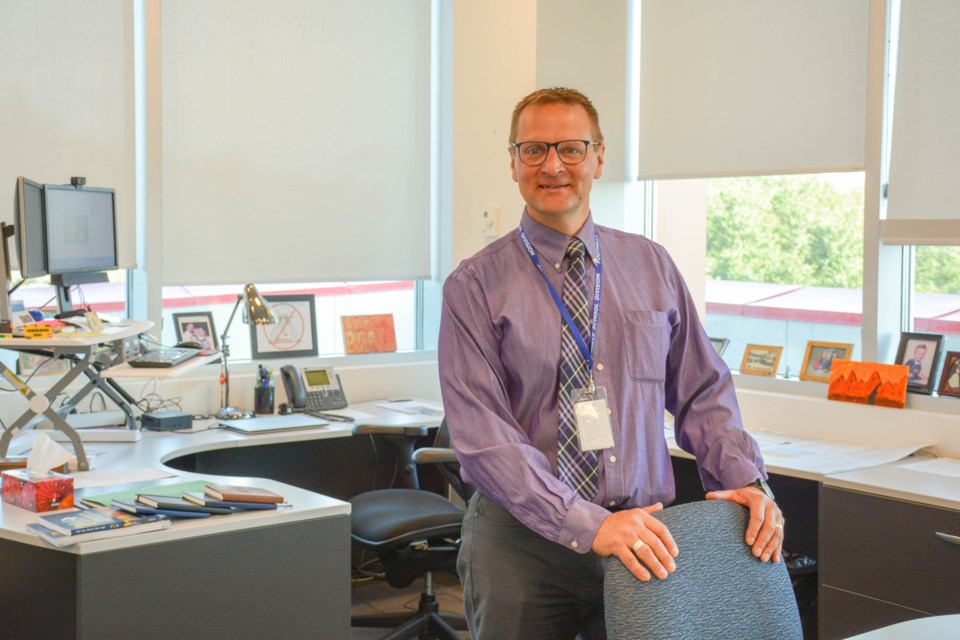 Foothills School Division superintendent of Schools Chris Fuzessy said it is busy preparing having students back at school for September.

The two major Okotoks school divisions are preparing for students returning to school in the fall — the scenario which was announced by Premier Jason Kenney on July 21.

Students in Alberta have been out of school facilities and learning at home since mid-March due to the COVID-19.

Foothills School Division superintendent Chris Fuzessy said it has been preparing for students returning to school since May.

“The fact Alberta Education chose Scenario 1 (students returning to school) doesn’t put us at any kind of disadvantage,” Fuzessy said. “Our planning kind of morphed into Scenario 1 as time went by over the course of May and June.”

“(The July 21) announcement gives us renewed focus when our team come back in mid-August to fine tune the Scenario 1 plans.”

The Province had set a deadline of Aug. 1 of which scenario it was going to set for September, those  were: 1) typical school as seen before the COVID-19 pandemic; 2) the mix of online and typical classroom and 3) The online schooling at home which all students have been taking since mid-March due to the pandemic.

Kenney announced students will return to school in as close-to-normal situation as possible in the fall.

Approximately 750,000 Alberta students will be in the classroom in the fall.

There are several health guidelines put in place for schools, Kenney said. Those include physical distancing, grouping students in co-horts to minimize infection spread, frequent hand washing with sanitizer in classrooms, extensive cleaning and others.

Masks for student and teachers are not mandatory, all though they have the choice to do so. Daily screening of staff and students is recommended.

"CTR is pleased we are returning to classes and we are refining our posted plan to more directly respond to the recent announcement," he said.

He said the division's plan for the upcoming year uses a combination of physical distancing, hygiene, respiratory etiquette, teaching, and effective routines to mitigate risk.

An update to CTR Catholic's existing plan will be available on Aug. 5.

Fuzessy said work had been done in June concerning ordering hand-sanitizer, what PPE may be needed from staff and other details.

“Now, we have to move from theory into practice, which we can’t really do until the students arrive in the building,” Fuzessy said. “That when schools do re-open we are going to acquire some understanding and support and patience from our community.”

Fuzessy said a thought exchange among Foothills teachers, students and parents showed they wanted a return to school.

“But they wanted to be assured of safety and security in the school setting,” Fuzessy said. “And the wellness of our student, staff and by extension our community is important to us.”

He said a challenge will be trying to make the co-horting work in each school.

“A smaller school population, it is more easy to co-hort effectively than in a larger school setting,” Fuzessy said. “I think that will be the biggest challenge but I don’t think it is something we can’t overcome.”

He said there will be families who wish to continue to have their children learning at home.

The division has extended the Hub at Home program from Grade 9 to 12 to Grade 1 to 12.

There are procedures for schools to change its scenario -- to at-home schooling for example -- if the health situation changes in a certain geographic area.

Highwood MLA R.J. Sigurdson said the Province has committed more funds in every school divisions’ budget for the upcoming year. As well, $15 million has been added in total to divisions to help cover COVID-19 costs.

He said parents are in support of school opening to students.

“In the past few months leading up to this decision there is a lot of strong support from parents across the board for children returning back to school for as near normal operation as possible,” Sigurdson said. “I believe parents recognize that students learn best when they are in the school with their peers and teachers.”

He has children in both Foothills and CTR Catholic Schools.

He said it was difficult for he and his wife teaching their children at home.

“Home-schooling was difficult, we had a lot on the go,” he said. “We both kicked in where we thought we had the strengths. It was a lot of work…

“We’re really excited to get our kids back into the schools. We understand it’s not without risk. But there has been a lot of planning and careful thought as to how this is going to work.

“Both of us are very confident about putting our kids back into in-class learning.”

In a prepared statement, Jason Schilling, Alberta Teachers’ Association president, said teachers want to be in the classroom but there are concerns.

“Teachers are looking forward to doing the work they love to do with their students, but we remain concerned by the failure of the government to adequately address their concerns,” Schilling said. “Successful school reopening is critical to the well-being of students, teachers, staff, their families and the economy, and it requires the confidence of everyone impacted.”

CTR Catholic was not available for comment at this time. Its comments will be added to an update to this story.

The ATA is calling on the province to focus on the following areas to prepare for return to school: