Student had designs on podium placement

An Okotoks student has slightly different designs for her future after returning from a national competition in the Maritimes.
Jun 3, 2019 4:06 AM By: Bruce Campbell 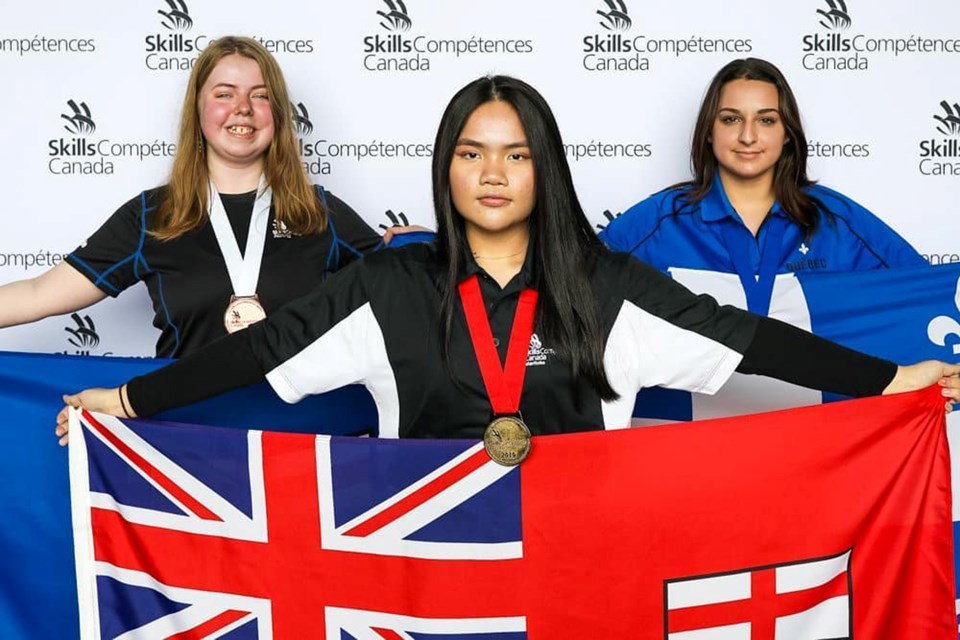 Julie Hayward, left, smiles after winning the bronze medal for graphic design at the Skills Canada National Competition (high school) in Halifax May 28-29.

An Okotoks student has slightly different designs for her future after returning from a national competition in the Maritimes.

“I was originally thinking of taking a year off school but now that I have seen what I can do and where I can go, I am now definitely looking at taking some courses next year, possibly at SAIT,” said Julie Hayward, a Grade 12 Alberta High School of Fine Arts student.

She qualified for nationals by winning the provincial championship in Edmonton. In Halifax, she and the other qualifiers were tasked with making a logo, a business card and a vehicle wrap for Computers for Schools. On Day 2, they created a t-shirt design, a sticker and brochure.

The logo is key – it’s kind of the mission statement for her whole process. Computers for Schools – a real organization – provides computers for low-income students and programs that need them.

“I wanted to incorporate the computer aspect (for the logo), the recycling aspect – I also wanted to move past computers and include mobile devices,” she said. “But I wanted to keep it very simple and clean as well. I definitely put the most time into the logo because it would influence the rest of my projects. I was happy with it.”

She was also happy with her business card and the vehicle wrap – a design for a car was something she had not ever done.

“It was kind of scary because it was getting down to the last 1.5 hours and I hadn’t done one before,” Hayward said. “You definitely have to think more three-dimensional, with the car wrap there’s all these different sides, you have to think where people are going to see it.

“It’s definitely more difficult to think about your layout.”

After the end of the first day, the competitors’ work was put on display.

“It was a little intimidating because there were so many ones that were very, very good,” she said.

Slightly intimidated, but with a keen eye. She said she studied the other work for tips to help her in the future.

“I was really looking forward to the second day, I was more relaxed because I had done the things before,” Hayward said. “I was able to give myself more time.”

She was able to get the final disciplines, the brochure, the sticker and the t-shirt done in time.

Bronze medals are nice, but so are life experiences.

“It has created a goal for myself – this is where I want to be in the next few years,” she said. “I was really proud of myself because this is such a huge achievement for me to get this far.”

Benjamin Stevens, the Comm Tech teacher at the Comp and High School of Fine Arts, is also proud of Hayward and her achievements.

“Her work is always excellent, I thought it was comparable with some of the post-secondary work,” Stevens said. “She was cool, calm, collected.

“The skills she is taking out of this is the ability to meet a really complicated project and to deliver a quality project on time.”

He said as a teacher, the trip to Nova Scotia allowed him to see what some of the top high school programs in Canada are doing and how it will help develop the Comp’s program.

Mac Simmonds, a Grade 11 student at the Comp, just missed getting on the podium in carpentry with an unofficial fourth-place finish. He was one of the four competitors who were able to finish the project.

Kennedy Leggett, a Grade 10 student at Holy Trinity Academy, also qualified for the national championship in Business Operations. She was one of the few Grade 10 students at the skills competition.

To see the full results go to skillscompetencescanada.com