For those making sparkling water or soda at home in Okotoks, life just got a little sweeter.
Apr 6, 2021 4:00 PM By: Anna Smith 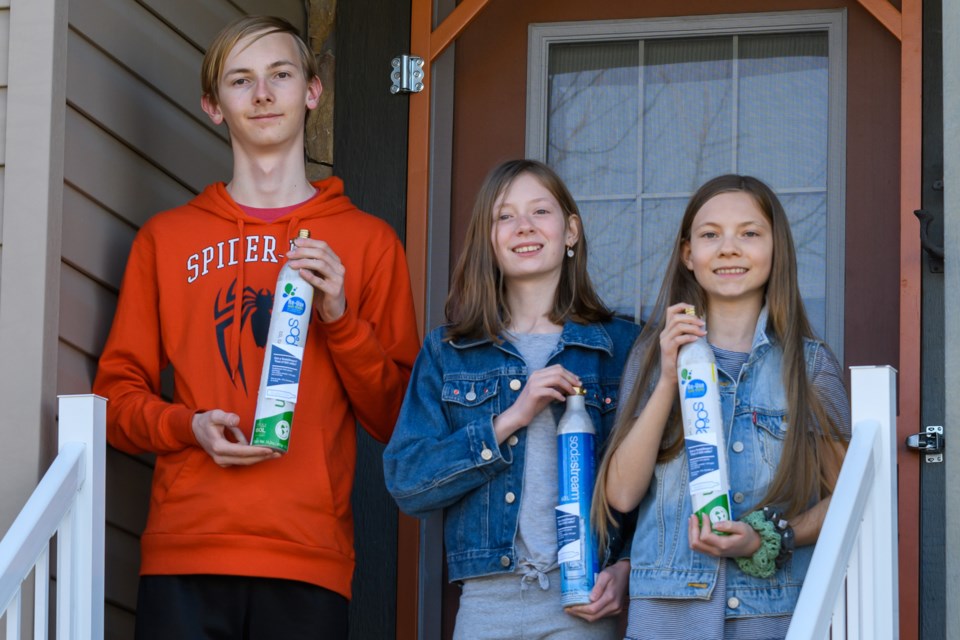 From left: Rhys, Kharis, and Avery Elsdon pose for a portrait in front of their home and main base of operation for their business, the Stream Team, on April 1. These three siblings launched their own business of exchanging SodaStream CO2 cylinders.Jessica Dezall/OkotoksToday.ca

For those making sparkling water or soda at home in Okotoks, life just got a little sweeter.

The core ideal behind their business, which has since become the team’s slogan, is that “Healthy Living Should Be Affordable.” The slogan was created by 12-year- old Kharis.

Avery, 12, noted how expensive SodaStream cannisters can be when purchased new in store, which can cost $20 or more.

“A lot of people find it really expensive, especially if they drink it a lot,” said Avery, “Every family usually goes through a cannister about once a month, and after a while can get really expensive.”

To exchange a cannister with the Stream Team costs $10, and the trade is contactless via a table outside of their home to ensure the safety of those using the service during COVID-19. This service is exchange only, and does not offer the purchase of full cannisters without dropping off an empty one.

Arranging an exchange happens via their Facebook or Instagram pages, which are run by the siblings themselves.

“It’s making it less money and a good way to get to help other people and a good business,” said Avery, adding that the Stream Team has several repeat customers.

Their parents have been supportive of the business, especially in the transport of the cannisters from their supplier’s home, which their father, Michael Elsdon, said would be too heavy otherwise.

The entrepreneurial careers of the three siblings began with a Western Wheel paper delivery route, which they have all done for five and a half years, said Rhys.

“Since three of us work together to do the newspaper we’ve split it three ways,” said Rhys, who is 15 years old. “We thought that if we really wanted to make more money than we do with newspapers, then we could start a business. So, we looked into how to do what we do and here we are, we’re refilling CO2 canisters for SodaStream.”

The children have also participated in Okotoks’ Lemonade Day two years in a row, where Rhys said they learned that money earned should be spent, saved and shared.

“We did that back when we did Lemonade Day, I’m pretty certain by now we probably spent some of the money that we had from that,” Rhys said. “We usually save money so we definitely have saved it and we did share some of our profits.”

The team plans to give 10 per cent of the profits of Stream Team to charity, said Rhys, as they did with the money made from their Lemonade Day venture.

Currently, the team is learning to increase its profit margins, as well as other key entrepreneurial skills such as how to market and customer service, said Michael.

The team is also releasing their second informational commercial in the near future.