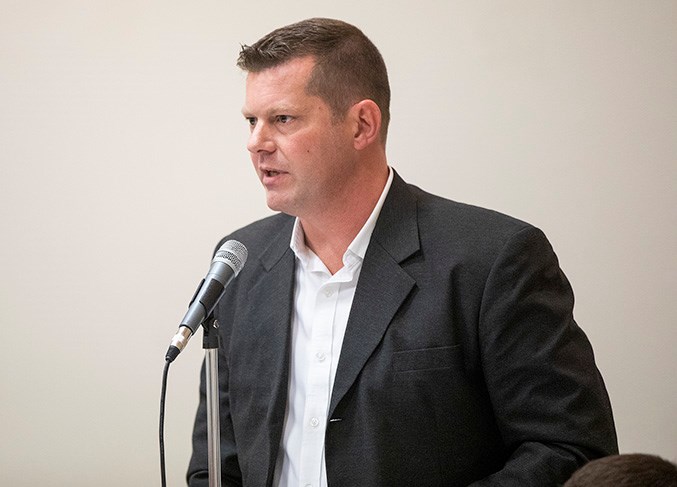 The former president of the United Conservative Party Highwood constituency association is now the candidate. R.J. Sigurdson won the Highwood UCP nomination on Oct. 16. He defeated incumbent Wayne Anderson, former Okotoks town councillor Carrie Fischer and businessman Dean Leask. “Now it’s all about working together for the party and with [UCP leader] Jason Kenney,” Sigurdson said. “Winning the nomination is only the first step. The real goal is making sure we have a majority Conservative government moving forward and we work to get Alberta back on track… I am not going to let my foot off the gas.It’s all about beating the NDP in the next election.” Sigurdson, a project manager and shareholder with Avalanche Air Systems, was the president of the former Highwood PC constituency association and became president of the UCP association after the two parties merged in 2017. He credits his nomination on getting to know people in the constituency, which now consists of Black Diamond, Turner Valley, Okotoks and east to Davisburg. “My entire campaign was focused on one-on-one conversations, listening to every member and making myself as accessible and listening to what their needs are,” Sigurdson said. “They care, they love Alberta. They want to see Alberta get back to where it was. “I went out every day and didn’t stop.” Anderson was elected as Highwood MLA in 2015, defeating Fischer from the defunct PC party. The preferential ballot went to the maximum three counts before Sigurdson received the required votes. “I’m disappointed with the result,” Fischer said. She said she is going to take some time off and then return to her work at MP Foothills John Barlow’s office in High River. Leask, who owns Contain-A-Way Services north of High River, said Sigurdson will be a strong candidate for Highwood in the provincial election expected to take place sometime in the spring. “He’s excellent,” Leask said. “All the candidates were good, they had their strengths and weaknesses, and I will be happy to support him [Sigurdson]. Leask said he is “extremely confident” the UCP will form the next government. Anderson did not return the Western Wheel’s phone calls. He will continue to represent Highwood, which presently includes High River, Okotoks and the Heritage Pointe area, until the election is called. Sigurdson agreed the UCP field for Highwood was strong. “Highwood is very, very lucky. Carrie Fischer, Wayne Anderson and Dean Leask, they put their lives on hold, they were committed to the community and they went through this nomination process,” Sigurdson said. “Residents should be thankful we have so many concerned willing to stand up to ensure Highwood has the best choice to vote for. “I would like to say thank you to all three of them for dedicating so much time to the community.” bcampbell@okotoks.greatwest.ca