Some Foothills residents aren’t pleased with changes to their addresses and mail delivery made by Canada Post. Effective Oct. 17, the postal service overhauled addressing for mail delivery in the MD of Foothills.
Oct 26, 2016 12:00 AM By: Krista Conrad 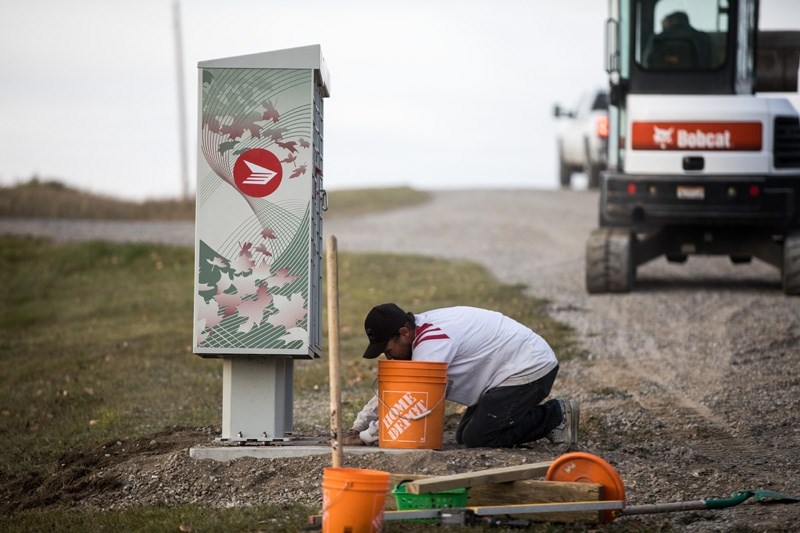 Crews erect new community mailboxes on Oct. 3. Some MD residents are worried the change in addressing will cost money and cause confusion.

Some Foothills residents aren’t pleased with changes to their addresses and mail delivery made by Canada Post.

Effective Oct. 17, the postal service overhauled addressing for mail delivery in the MD of Foothills. All resident addresses were changed to their MD assigned 911 addresses and, in many cases, the municipality was also changed.

Some, like Bernice Schwartz, are now considered by Canada Post to reside in Foothills, AB rather than DeWinton, AB as they were in the past. She said changing the name of the location is unnecessary and costly.

“It doesn’t even make sense and it’s costing us a lot to change everything,” she said. “I’m frustrated, and I’m sure a lot of other people are, too.”

She said having to change address information on all pieces of identification, passports, driver’s licenses, bank cheques is going to take a lot of time and could cost money.

Schwartz said when they knew the change was coming she told her husband to hold off renewing his driver’s license until they knew their new address to avoid unnecessary fees.

Dean Carlson, owner of Ardiel Agencies in Okotoks, said the provincial government is offering to waive the $22.45 cost of address changes on driver’s licenses for MD of Foothills residents.

“As long as they bring in their letter that states their address changed, then we can take a copy of that letter and send it to the government and they provide the free service,” said Carlson. “As long as they have that letter we can override the fee.”

In addition to her frustration with the address change, Schwartz said she was shocked to learn Canada Post would be replacing all the rural mailboxes with new superboxes. She said her neighbourhood mailbox was replaced 10 years ago and the upgrade wasn’t necessary.

“I don’t understand why they have to change to another type of new box,” she said. “There was nothing wrong with security and it had never been vandalized.”

Phil Legault, media relations representative for Canada Post, said replacing the older green group mailboxes is part of the civic addressing changes across Canada, which will provide more security, as well as the benefits of parcel compartments and an outgoing mail slot.

“It’s a much better service for customers,” he said.

Legault said the goal of the civic addressing initiative is to match the physical address to the mailing address for rural customers and allow residents to have one consistent address.

All rural residents in the MD will get one year of free mail forwarding to allow them to adjust to the change, he said.

Nance Seaborn-Krenz said having free redirection for a year is a nice addition, but it doesn’t begin to cover the stress and frustration of having to make address changes everywhere.

“I don’t think people should have to pay for all these changes when we didn’t ask for them,” said Seaborn-Krenz. “It could be a lot of logistics for people who don’t live in Okotoks, who aren’t very mobile.”

She said she’s also concerned about the municipality, and whether Foothills residents need to make changes with the MD office for tax purposes.

MD of Foothills CAO Harry Riva-Cambrin said the MD tax roll remains the same, but residents are required to notify the Province of address changes on their land titles. If it is their first change there is no fee, he said.

“They should also notify us of their address change,” said Riva-Cambrin. “We don’t require a new title with a different address on it. We will have the new addresses, but if residents wish to double-check they can send it to us as well.”