Residents in northwest Okotoks are fed up with the amount of dust and debris they find blowing into their yards and homes from the D’Arcy site on daily basis.
0
Sep 6, 2017 12:00 AM By: Krista Conrad 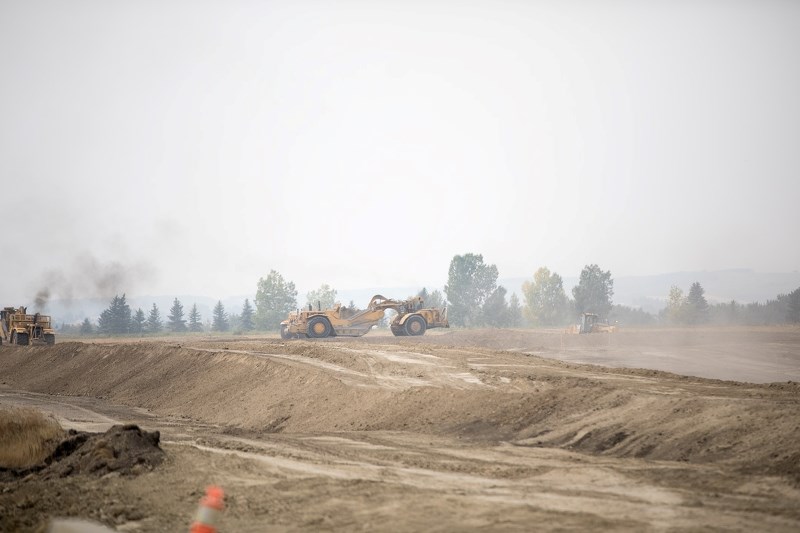 Residents of northwest Okotoks are unhappy with the amount of dust in their homes due to construction on the D&#8217;Arcy site.

Residents in northwest Okotoks are fed up with the amount of dust and debris they find blowing into their yards and homes from the D’Arcy site on daily basis.

Construction began on the D’Arcy Ranch lands in the spring, and the site has been a flurry of scraping and rough grading activity all summer. However, some living in nearby neighbourhoods are sounding off on the amount of dust they say the work has created.

Chris Large, who lives in the 100 block of Suntree, said he’s tired of having to use a power blower to remove dust from his front and back porches and vehicles every day. He’s calling on the Town to have more dust control measures implemented on the construction site.

“They’ve got probably a dozen scrapers and bulldozers there, and they’ve got one water truck,” said Large. “It would seem to me the developer’s got more responsibility to the community than having one water truck doing however many dozen acres of scraping they’re doing.”

He took his concerns public with a post on social media last week, which garnered support from some users and generated criticism from others.

Seeing comments from other residents with similar concerns told him the Town needs to take action, he said. Others who said it’s just part of development likely don’t live in the area and aren’t exposed to the issue, he said.

“It’s development, so I guess if they wanted to go 24/7 and have all their machinery running close to those houses that I should suck it up and live with it,” said Large. “You know what? Development or not, there should still be a responsibility and a social awareness that you could do development without impacting the neighbourhood.”

He said existing residents should not be inconvenienced just for the sake of building more homes and businesses.

Hazel Tulick, who lives in the villas behind No Frills, on Sandstone Court, said it’s been a long summer living with the dust and debris coming from D’Arcy.

The situation was compounded by a couple of dust storms, which carried even more dirt into their yards and home, she said. It was so bad at one point, she said drivers had to pull over due to a lack of visibility.

“It’s just inadequate dust control and dirt control,” said Tulick. “There’s dust in our yards, on our deck, in our houses. It’s in our plants, it’s in our curtain, it’s in our windows and window sills. It’s everywhere.”

She said some people in the neighbourhood have hired professional cleaners a few times over the summer to deal with the mess, but many have given up on staying on top of it.

Though there have been two water trucks on the site recently, she said it’s still not enough to keep up with the amount of dust in the air.

Mitchell Kowalski, Okotoks engineer technologist, said the developers at D’Arcy are in compliance with the Town’s policies around dust control for construction sites.

“The contractor who’s been on the site there has taken the dust concern very seriously, and they have shut down on multiple days just due to high winds and the amount of dust it was creating,” said Kowalski.

Kowalski said the developer has employed sufficient dust control methods with its water trucks according to the Town’s specifications.

It’s normal to see dust in the air during construction, but the weather this summer has compounded the issue everywhere, he said.

“That’s probably one of the worsts things, is the weather,” said Kowalski. “All the construction sites I’ve been to in the town have been really dry. It’s hard keeping up.”