Goldfish have been reported in two ponds in Okotoks’ northeast corner more than six months after a chemical treatment intended to eradicate the fish was completed.
Apr 28, 2017 12:00 AM By: Okotoks Western Wheel Staff 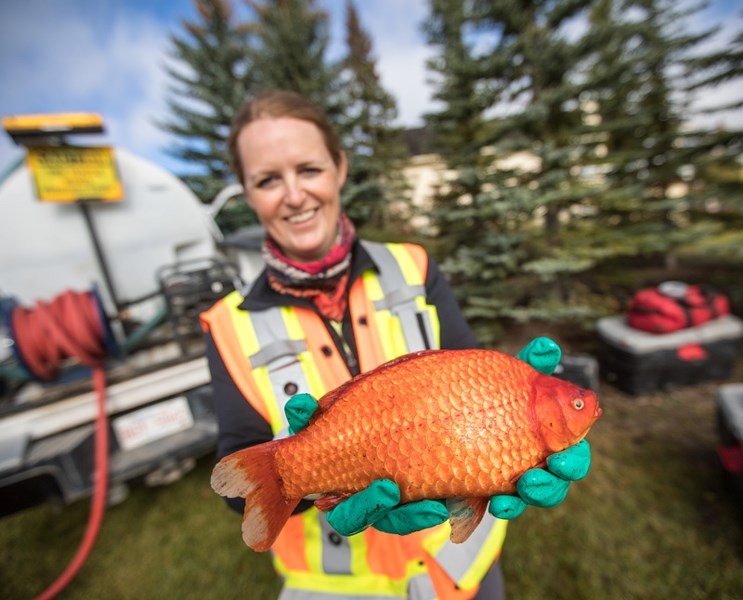 The Town of Okotoks removed as many as 10,000 goldfish from stormponds in Crystal Ridge and Drake Landing areas last year; however, it is looking into reports some may have survived after goldfish were spoted in the ponds.

Goldfish have been reported in two ponds in Okotoks’ northeast corner more than six months after a chemical treatment intended to eradicate the fish was completed.

The Town of Okotoks is now looking into reports of goldfish seen in storm-water ponds in the Crystal Ridge and Drake Landing areas to confirm whether any survived two applications of the chemical rotenone last year.

“We’ve had a couple reports of sightings, one in Drake Landing and one in Crystal Ridge pond today [April 20] of an osprey picking out an orange fish,” said parks manager Krista Michailuck.

Goldfish were first spotted in the two storm ponds in 2015 and some were as large as dinner plates.

Two Rotenone applications were done in summer and fall last year in a pond behind homes along Crystal Ridge Drive and a second one near the north entrance to the Okotoks off-leash park.

The storm ponds drain into the Sheep River and the Town took steps to eradicate the fish last fall to prevent them from making it into the ecosystem.

Goldfish may be cute in a fish bowl, but they’re an invasive, non-native species. Once out of the fish bowl, they can grow and out compete native species for food supplies.

Michailuck said the Town will need to monitor the ponds to determine whether there is a problem.

“It’s disappointing to hear that there’s a couple fish found,” she said.

With reports the fish are larger in size, Michailuck said it’s unlikely they could’ve been introduced in the ponds since the fall because they take a couple years to grow.

The Drake Landing pond, it is connected to three other ponds upstream. The upstream ponds were not treated in the fall. Michailuck said the Town did check them for goldfish and did not find any at the time.

She said the Town will look to see if there are any goldfish in those ponds that could’ve worked their way through connecting pipes.

“If the problem exists in one of those ponds and we don’t know it, then it’s possible fish could come down the storm water system and re-infect that pond,” said Michailuck.

Finding goldfish in the ponds doesn’t mean the Town’s actions in the fall are for naught, she said.

“We certainly got 99.99 per cent of the fish out of the ponds because there was probably 10,000 fish in those ponds,” said Michailuck.

Michailuck urged people not to release goldfish or other non-native species into natural habitats.

She encouraged residents who see goldfish, or other species they question may be invasive in storm ponds to the Town.