Sometimes getting out of the house is difficult to conceive of for caregivers of dementia patients. Okotoks is providing those caregivers and their loved ones with the opportunity to get out and socialize with like-minded people.
Aug 8, 2018 6:00 AM By: Krista Conrad 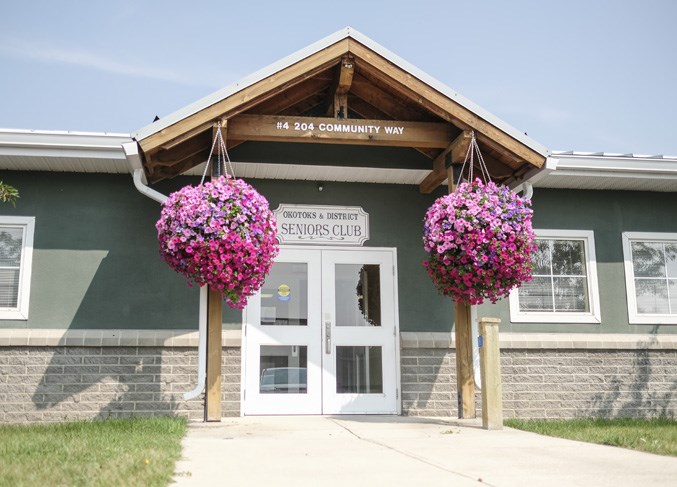 Dementia Friendly Communities hosts a Memory Cafe for those with dementia and their caregivers and loved ones to socialize and learn more about the condition. The cafe runs at the Okotoks and District Seniors Club on the first Wednesday of each month from 1 p.m. to 2L30 p.m.

Sometimes getting out of the house is difficult to conceive of for caregivers of dementia patients. Okotoks is providing those caregivers and their loved ones with the opportunity to get out and socialize with like-minded people. Dementia Friendly Communities hosts Memory Café the first Wednesday of each month at the Okotoks and District Seniors Club from 1 p.m. to 2:30 p.m. “It’s an opportunity for caregivers to bring their loved ones who are impacted by dementia just to connect with others, to get out of the house,” said Jennifer Mallamo, co-ordinator with Okotoks Dementia Friendly Communities. “Sometimes caregivers stay home because they don’t necessarily want to take their loved one with dementia out.” The first session ran during Seniors’ Week in June and had 10 people come out. Since then attendance has dropped a little in the summertime. Mallamo said she’s hoping to see it pick back up in the fall. “It’s taking a little while to gain some ground,” she said. Memory Café is free to attend and includes coffee and refreshments, as well as information and access to resources for people to contact if they need a little help navigating the world of dementia, she said. It started as a branch of Conversation Café, which was launched in Kensington in Calgary in fall 2017 by Allan Rae and his wife Joan Connor, who was diagnosed with Alzheimer’s Disease five years ago and remains active and social. “We brought the idea originally back from California (where they spend the winter) and put it together,” said Rae. “We were at one in Palm Desert and thought it was a great communicational thing with getting together with people who are caregivers, people who have dementia, people who want to learn more about it.” The cafés provide a space for people to talk about dementia openly, in a comfortable environment. Much like Alcoholics Anonymous, it’s a safe place to speak your mind and everything stays within the community of café-goers, he said. Rae thought it would be beneficial in the Calgary area. When the first one ran, the couple was in California and Rae checked in with his volunteers to see how it went. There had been about 18 people in attendance, he said. “But out of those people there was a couple, one with dementia and one a caregiver, who had come out to the café and this was their first social outing in three months,” said Rae. “And I said, ‘That’s the reason we’re doing it.’ “It’s the fact we’re able to get people out, to communicate, to share conversation with like-minded individuals.” It hasn’t necessarily grown exponentially in Kensington itself, but the Conversation Café has branched out to a couple locations in Calgary and there is one in Cochrane. The Memory Café in Okotoks adds to the complement of offerings. Mallamo said it’s important to host the café, and she hopes when the Dementia Friendly Community pilot ends in February there will be a strong enough volunteer base to carry on the monthly event. If it’s up to volunteer Joyce Landis, that shouldn’t be an issue. “This is such a great place for them to come and just, especially for the caregivers, to have some respite from their care and ongoing questions, and just to get out and mingle with other people and forget maybe some of their struggles at home,” said Landis. She’s spent the first 13 years of retirement from Spruce Meadows volunteering in various capacities in the community, and thought Dementia Friendly Communities would be a good way to get involved. With her hospitality background in hotel management and wedding planning, running social events comes naturally to Landis. And she saw first-hand the importance of having a way for dementia caregivers and their loved ones a way to socialize. “We have one friend in particular who has dementia, and we’ve seen his progression and we’ve also seen the need for his wife to have respite from his care,” said Landis. She said the café will likely keep growing once summer is over. One couple has been to each session so far, which she said is promising. In July, one caregiver came out on her own, without her loved one – which is also encouraged, said Landis. “She just opened up and said it was so great, she said she was scared to come but she just shared and shared and she said it’s been such a relief to her to come here and just talk,” she said. Mallamo said the goal of Memory Café is to reduce the stigma around dementia and increase awareness of it, by encouraging conversation about the condition. There is a stigma around dementia, and she said the café aims to strip some of that away. Some people are nervous to talk about the condition or admit they or a loved one are suffering from dementia, but it’s important to get it out in the open, she said. “Some people want to just chat and feel comfortable and not worry about not knowing where their words are going to come from and just be surrounded by people,” said Mallamo. “Other people are just curious to know what this is all about and how they can get connected about the conversation. “Both reasons for coming out are important.”