Proctor off and running across Canada 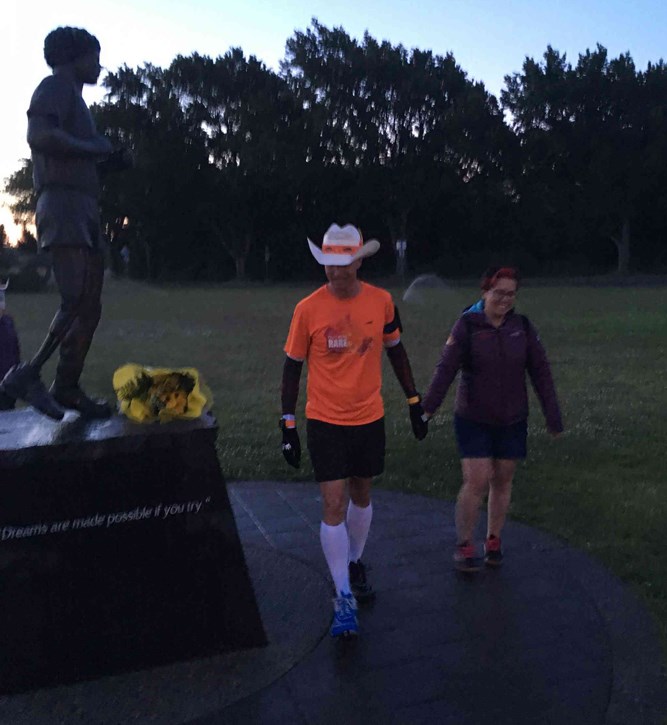 Okotoks runner David Proctor begins his cross-Canada run at about 5 a.m. PST June 27 with his wife Sharon at the Terry Fox statue in Victoria B.C.

Most marathoners when they taper, the longest run a week or so before the big event is maybe 10 to 15km. But how do you taper when your big run is 7,200km, and trying to average 108km per day over 66 days? “Oh, I have started to taper — it’s not like I have stopped running,” said Okotoks’ David Proctor a week before he starts his run. “I am still running about 28km or so.” Proctor dips his hat into the Pacific Ocean today (June 27) at 4:30 a.m. PST to begin his cross-Canada trek to St. John’s, N.L. as he attempts to break the record of Al Howie who did the trek (from east to west) in 72 days in 1991. His main goal is to raise money for the Rare Disease Foundation. He spoke to friends of his inspiration for his crazy journey on June 19 at St. Mary’s Elementary School. “The kids asked me who my heroes were and I said: ‘Terry Fox’, that’s an obvious one,” Proctor said. “Then I said my other hero was that guy over there. He has trouble just going out at recess to kick a soccer ball. People complain about everything, but he never complains. He is my hero.” Proctor was talking about his nine-year-old son Sam, a Grade 4 student at the school. Sam has RECA, a rare disease that affects his balance and mobility. “The kids all said: ‘Yeah, your right, he never complains,” Proctor said with a laugh. Proctor is going to have help along the way. Wayne and Trish Gaudet will travel in a support van behind Proctor while he runs. Wayne is a world champion 24-hour ultramarathoner for his age group. He proved his genius when picking up supplies from one of Proctor’s new sponsors last week, Tool Shed Brewing Co. “I wanted to have a whole beer at lunch, but Wayne told me I should only have half,” Proctor said. “What an incentive. Having a half a beer, and knowing you can have the other half when you’re done… There’s nothing like a beer after a run.” He said one of the toughest parts of the run will be the first week. Proctor said other people who have done cross-country trips have stated the first few days are the toughest until he or she hits their groove. He will start his runs before 6 a.m. most days. However, he may start as early as 4 a.m. if heat is expected to be a factor. A week before starting in Victoria, Proctor said he felt mentally and physically fine. He should be loosened up by the time he makes his closest stop to home. He hits Calgary on July 6 — the first day of the Calgary Stampede — and there will be a 5km Fun Run at Edworthy Park at noon. Foothills MP John Barlow is expected to participate. Barlow gave Proctor praise during a session in Parliament recently. After the run, Proctor will toddle off to Chestermere, but will come back to the Staples on 130th Avenue — driving, the slacker — for a fundraiser barbecue and other activities at 6 p.m. Staples is a major sponsor. At present there is a rack of Out Run the Rare swag for sale at the Okotoks Staples, with proceeds towards the charity. Proctor has volunteered to have his heart monitored and MRI’d during the race. A story on that testing will appear in next week’s Western Wheel. For more information about the run or to donate go to outrunrare.com