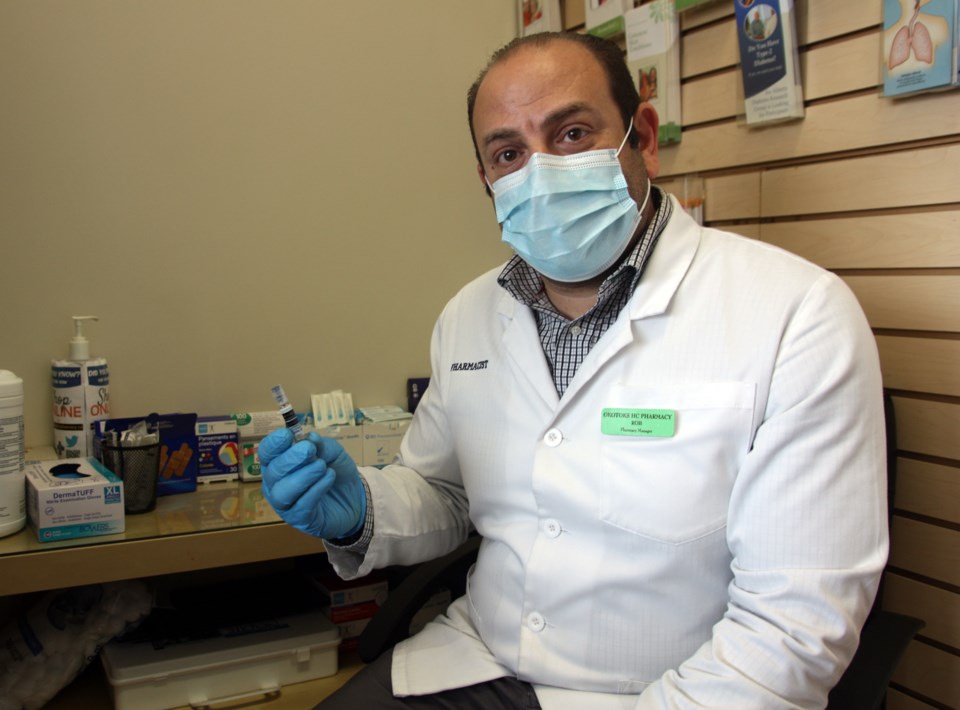 Okotoks H.C. Pharmacy pharmacist Rober Rofail with a dosage of the 2020 flu shot. The shots are available to the general public starting Oct. 19. (Bruce Campbell/Western Wheel).

Rober Rofail, a pharmacist at Okotoks H.C. Pharmacy on Elizabeth Street, has been busy the past week giving flu shots to seniors and high-risk individuals.

He said the number of shots will increase when they become available to the general public on Oct. 19.

Rofail said judging by the amount of phone calls, there are more people getting the shots this year.

“That is likely because of COVID,” he said. “There is the possibility you can get COVID and the flu together.

“I think there are more people trying to protect themselves from the flu.”

He said it is difficult to differentiate the symptoms between COVID and the flu. And by combatting the flu, it may pay dividends later.

“If you are working and you get the flu, you might have to take two weeks off (because of COVID-19 protocols),” Rofail said. “It (the flu shot) is not 100 per cent, of course, but at least you have protection against the flu.”

H.C. is doing its shots by appointment, rather than the informal drop-in, which may have occurred in the past.

“We try to space it out between flu shots because once you have the shot you have to wait 15 to 20 minutes in the store just to make sure you don’t have any reaction to it,” he said. “We are trying to do it by way of appointment, 15 minutes apart, to make sure we don’t have any crowds waiting.”

Jeff Ertl, a pharmacist at Pharmasave Milligan Drive, said there is early interest in the flu shot.

“We have had a lot of people ask about it in terms of starting up the flu shot clinics,” he said. "We’ve been booking up quickly.”

Although the official date is Oct. 19, Ertl has already poked a few arms.

“We have had high-risk individuals already,” Ertl said.

He said the reason for the extra demand is simple — people want to protect themselves from getting sick.

“People are asking for it early,” Ertl said. “It does take two weeks to build up an immune response to the vaccine.

“Just because you get the flu shot doesn’t mean you are going to be immune the next day.”

Although, it doesn’t offer any guarantees, the vaccine is a highly educated hypothesis.

“It is based on the World Health Organization what the feel we be the most prevalent viral strains in the upcoming flu season,” he said.

There are four different flu, which the 2020 vaccine will combat.

Jason Spicer, pharmacist at Pharmasave Black Diamond, is taking a wait-and-see approach as to the demand for the flu shots. However, he wouldn't be too surprised if there is an increase in demand come Oct. 19.

"How many people who generally don't get a flu shot are  getting a flu shot, we won't have any sort of determinant on that until we are probably two days in or so," Spicer said. "The government is saying, I don't know the exact number, a 20 per cent higher uptake, and I would probably agree with that."

He said while there has been phone calls concerning the flu shot at this point it isn't abnormally high.

But that could change.

"I anticipate people were on the fence before COVID, will be now getting a flu shot," Spicer said. "Any of those who are anti-fluers, well, that probably still is not enough to convince them."

Flu shots are available at most pharmacies starting Oct. 19 and by the majority of family doctors. Albertans five years of age and older can get a shot at a pharmacy.

Children between the ages of six months and five years old can get immunized through Alberta Heath Services.