Pathway concerns expressed to rec board 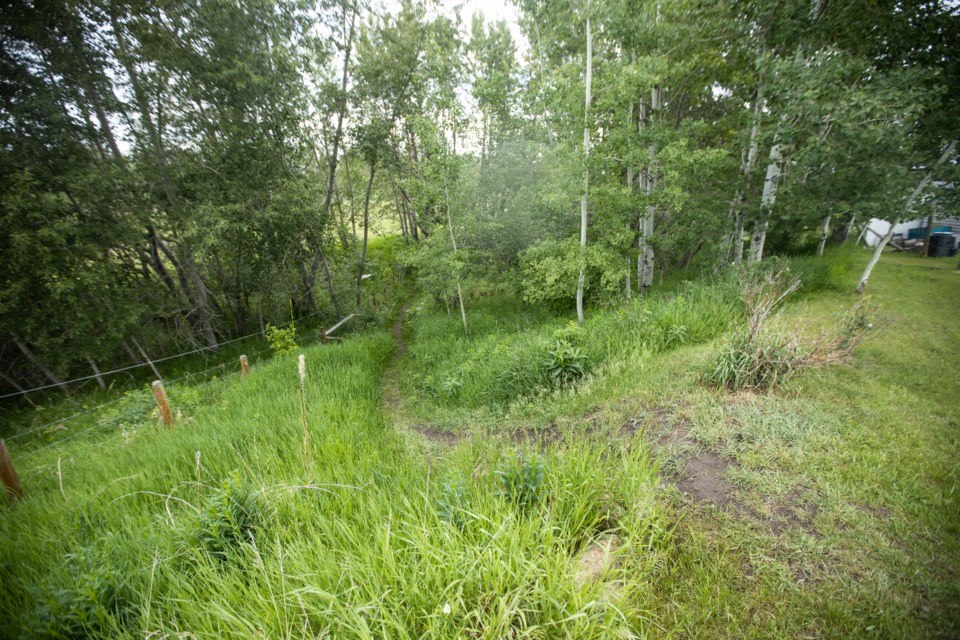 Residents have voiced concerns over plans to widen and pave a small pathway at the north end of Government Road in Black Diamond. (Brent Calver/Western Wheel)

Concerns of off-leash dogs, parking and compromising the environment if a proposed 230-metre gravel pathway proceeds were expressed by nearby residents at a special Black Diamond parks and recreation committee meeting July 4.

“My biggest concern is the number of vehicles that start parking along there,” said Trish Price, who lives by the entrance to the pathway at the north end of Government Road. “The number of vehicles sitting there idling. I have to smell diesel all day and all the dogs around there.”

The pathway leads to an off-leash dog park and is part of the Black Diamond Trails and Pathway Master Plan. The budget allocation for this portion of the pathway is estimated at $67,700.

“It is part of the overall plan so people can walk around the entire town,” said committee chairwoman Jeannine Tucker.

The present parking and entrance for the off-leash dog area is located two blocks west of Government Road on private property at the end of 2 Avenue North.

Tucker said there are no plans to close that entrance in the future.

In a letter to the board, resident Tom Taylor wrote of his concerns about parking from people using the improved pathway at Government Road.

“There are no homes in the immediate area of the current entrance (of the off-leash park),” Taylor wrote. “That is not the case for the proposed new entrance. I predict once word gets out about the new gravel walkway, more and more pet owners will choose it as an alternative.”

The safety of the current dirt pathway at the end of Government Road is a concern.

The night of the meeting rain had made the steep portion of the pathway slippery.

The fact the Town is aware of the dangers, could be a legal concern in the future, said Les Quinton, Black Diamond parks and recreation manager.

“If it is our property and it has been identified that there is an issue there and we don’t do something about it our insurance will not cover us,” Quinton said at the meeting at the Scott Seaman Sports Rink. “Just realize that someone would be suing the Town and that is taxpayers’ money.”

Sandra Sokoloski said she doesn’t think the residents’ issues are with improvements to the safety of the pathway but with the new pathway proposed.

“There needs to be something done to address the safety of that traverse, but with minimal impact environmentally, visually and financially," she said. “When you are allotting that much money to materials to put pathway all the way to the dog park, you are basically dumping people out into a natural path system which the dog park is.

“Improving the safety of the slope? Absolutely.”

She recommended using materials in other areas to make the pathway system in Black Diamond more continuous.

She also said the issue of loose dogs is already a concern and may get worse with the improved entrance.

She added she recently had a dog, which was being let out a car, run in front of her while she was driving.

Dogs have to be on leash until reaching the off-leash park.

Black Diamond has a two-question public survey concerning the improvements to the pathway on its website which will continue until July 12.

The suggestions made to the recreation committee on July 4 will be passed on to town council who will make the decision as to whether to proceed with the Government Road pathway improvements.

To take the survey and for more information on the pathway plan go to.town.blackdiamond.ab.ca