Upgrades to skate park will grind on with community support.
Feb 3, 2021 9:45 AM By: Brent Calver 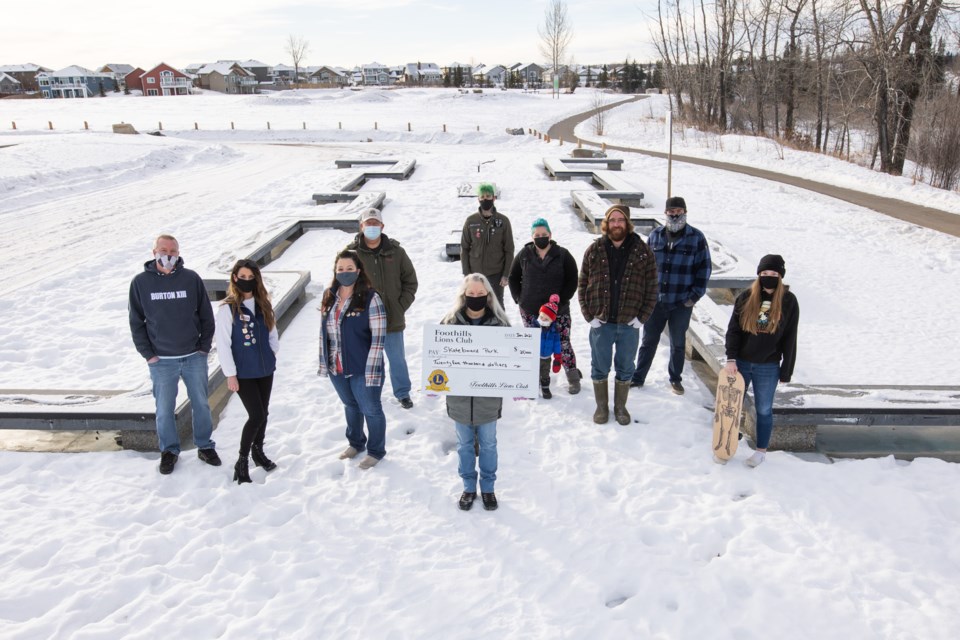 The Black Diamond Skate Park Fundraiser committee received a donation of $25,000 from the Foothills Lions Club on Jan. 30, along with $5,000 from Western Financial Group. The group of Black Diamond area residents have been raising funds for an expansion to the Black Diamond skate park.Brent Calver/Western Wheel

Hopes for upgrades to the Black Diamond skate park will grind on with community support.

Local entrepreneur Colin Fleming set out in August 2020 to modify the skate park located behind the Oilfields Regional Arena after getting Black Diamond council’s approval.

The Black Diamond Skate Park Fundraiser Committee then put out online surveys to let the community select what they would want to see added to the recreational area.

After efforts to raise funds through bottle drives for a price tag Fleming said could be well over $100,000, two Foothills organizations came through in a big way.

The Foothills Lions Club presented the skate park’s group with a cheque for $25,000 on Jan. 30, with Western Financial Group coming through and donating $5,000 to the cause.

In addition to other efforts such as the bottle drives, the pot now sits at over $75,000, said Fleming.

He and his group greeted the Lions at the skate park over the weekend to accept the donation.

“We heard about Colin spearheading the project and we’re big on supporting local initiatives,” Bates said. “We think it’s something the community really needs.

“Turner Valley and Black Diamond are very much becoming an up and coming area where there's a lot of brand new families coming in, and we need a place where they can hang out and have fun in the outside, especially now with COVID.

“It gives them an opportunity to walk somewhere and be active outdoors with their friends in a nice environment.”

Fleming said they have also teamed up with the Oilfields Sports Association in hopes of accessing larger grants.

“Now that we have $75,000 people can actually see it's real,” Fleming said. “The drawings are being done as we speak.”

He added that with the current momentum, the group is hoping to have construction underway by summer 2021.