Okotoks youth excited to retake the stage in Stampede show 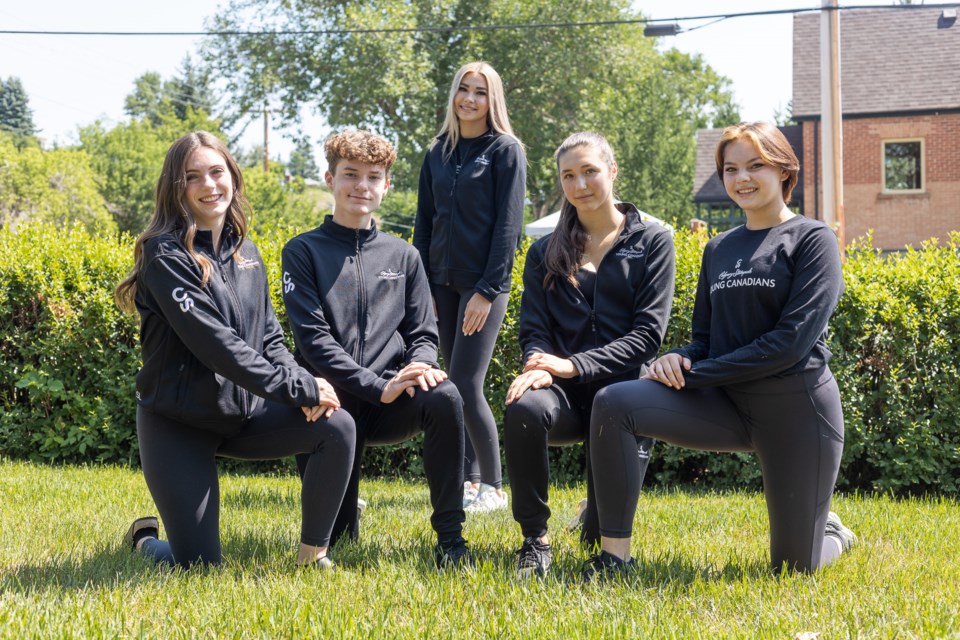 (From left) Young Canadians performers Sydney LeMaistre, Jack Leathwaite,Taylor Atkinson (distanced in back), Macy Weisgerber, and Isis Macdonald pose in Okotoks on July 8. The youth performers will be taking the stage at the Calgary Stampede Grandstand once again for 2021 after missing out on a year during the COVID-19 pandemic.Brent Calver/OkotoksTODAY
The 2021 Stampede Grandstand show will be one of firsts and lasts for Okotoks’ Young Canadians.

“It’s very, very exciting to be able to be back on stage, especially for me," said Sydney LeMaistre, who will be giving her last performance as a senior dancer with the group.

“I wasn't sure if I was going to be able to hit the stage again, but I was able to come back for one more year, which is very exciting.”

As the COVID-19 pandemic put much of her life on hold, and with the cancellation of the 2020 Stampede, LeMaistre was worried she had missed her last shot at performing.

“It was really hard for me, especially after hearing there were no graduations, no Stampede,” she said. “I’m really happy to be back and to be able to finish my time there, because I’ve created a family.”

After a year and a half of the pandemic, she welcomed the normalcy of looking forward to another performance with the troupe.

“There’s a lot of precautions and stuff put in place for all of us,” LeMaistre said. “Young Canadians, park staff, and everyone, we all feel that we’re safe on stage, under stage, entering and exiting the grounds.

“Stepping on the grounds, it felt like normal—yes, things were different and there were definitely changes made to accommodate COVID and all that, but it felt like we were kind of back to normal and we had some sense of what it was like before the pandemic hit.”

In an interview following her first performance of the 2021 Stampede on July 10, LeMaistre was ecstatic.

“To be back on stage was better than anything words can describe,” she said. “Stepping on that stage is an amazing feeling and something you can’t find anywhere else.

“It was kind of crazy, looking out at the audience felt so amazing—the crowd was amazing too, with everyone clapping and shouting and having so much fun.”

Having danced since the age of three, LeMaistre joined the Young Canadians since 2014.

Initially a competitive dancer, she found more joy in the performance side of the art instead.

Having graduated from Holy Trinity Academy (HTA) in 2020, LeMaistre took a year for personal development and will be pursuing education in nursing at Mount Royal University in the fall.

As the curtain closes on LeMaistre’s time with the Young Canadians, Macy Weisgerber’s act is just beginning.

“I’ve never been part of a performance this big, and at such a large scale,” said Weisgerber, who has been a dancer for six years.

Considering it a long shot, she submitted a video audition the year prior in hopes of joining the performance group.

“I thought I probably wasn’t going to get in, then I figured ‘Well, why not?’, and I made the cut," she said.

The news of the show going forward was a relief to Weisgerber as well.

“Especially with this whole year, we just didn't know exactly what was happening from week to week,” she said. “Getting that go ahead for Stampede was something that I think we all kind of needed.

“We were all pretty tired of Zoom and just having that little glimmer of hope at the end of the tunnel, I think really kept us going.”

Going into her Grade 12 year at HTA in the fall, Weisgerber is hoping to balance academics and dance over the coming year.