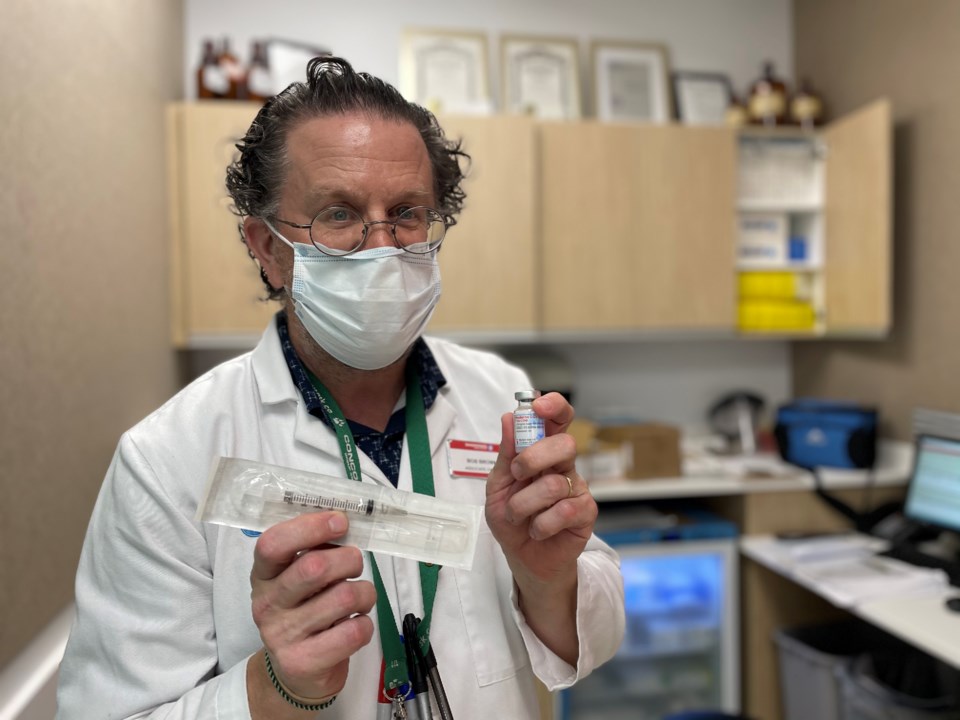 Bob Brown, owner and head pharmacist at Okotoks Shoppers Drug Mart, with a dose of the Moderna COVID-19 vaccine in March. The drug store is offering vaccines again this week. Krista Conrad

The Mayor of Okotoks was startled to hear the community went over the century mark in regards to COVID-19 numbers on Monday.

“That’s absolutely horrible,” Mayor Bill Robertson said, after hearing 105 COVID-19 cases were reported in Okotoks on April 5. “I had not heard 105, that’s very distressing. We certainly have to stay the  course...

“I am a firm believer that the masks aren’t everything, but they are something — and of course, avoiding the social gatherings for sure.”

The 105 cases reported on the Alberta Health Services site was the most ever reported in Okotoks as of April 5. That number dropped to 99 on April 6.

Robertson said he is also concerned about the impact COVID variants are having in Okotoks.

Numbers have been steadily rising for the past month.  On Feb. 26, Okotoks was at 14 cases, below the threshold of 15 set by the Town of Okotoks to make the wearing of masks mandatory in all public places (that threshold has since been superceded by a provincial mandate for masks to be worn in public places).

The number of reported cases in Okotoks more than doubled in a week – there were 52 on March 29.

“We are trying to sustain the businesses, we don’t need any firm lockdowns,” Robertson said. “But this doesn’t bode well for easing restrictions.”

Premier Jason Kenney announced a rollback to restrictions to Step 1 for businesses and services on April 6.

Dr. Adam Vyse, a High River family physician who lives just outside of Okotoks, said the spike is an indication the third wave of COVID-19 is on its way.

“It reflects the third wave coming to Foothills, Alberta, no question,” Vyse said. “Everyone is so tired and fed up with this pandemic and the restrictions. My sense, and I feel it myself, is I am ready for it to be over.

“And people are relaxing their vigilance and allowing situations to occur with the virus to spread.”

He said in Alberta, approximately half of the new cases are variants.

“They transmit way easier,” Vyse said. “We are seeing that in the cases in the community, where people reflect on their habits and say they haven’t had a lot of interaction, but they still managed to contract the virus.

He said a concern is more young people are getting the virus due to the variants.  Foothills School Division announced there were eight cases of COVID-19 connected with Foothills Composite High School last week.

One bright side is Okotoks area pharmacists have received vaccines.

“What we get sent by Alberta Health Services is something we can get through in about a week,” Brown said.  “We should be done by Thursday and then we will wait until our next shipment before we take appointments.”

He is estimating 60 vaccines a day to be given at Shoppers.

He wouldn’t speculate what the vaccine impact will have on the variants.

“There is a lot that just isn’t known, no one can say this Moderna vaccine that we are working with is going to be as effective on the South African variant or the Brazilian variant as it is against the variant it was designed to take,” Brown said. “We can’t prove that yet. There are a lot of presumptions that it will... we just don’t have all that information yet.”

However, he recommends taking a vaccine.

“What we are telling a lot of people and it is coming from our authorities, the best vaccine is the one you can get,” Brown said. “We don’t really have the liberty to pick and choose. Take the one that is available and it is going to help.”

Pharmasave Milligan Drive is expecting the Moderna vaccine in the near future.

Pharmasave pharmacist Jeff Ertl said he anticipates the doses will be gone in just over two days, based on 90 vaccines a day.

He doesn’t anticipate any issues filing up his vaccine spots.

Anyone getting a vaccine had better have their timing down. Ertl said, for example, there are 10 doses per vial of Moderna.

Once the vial is cracked open, there is six hours to use the dose before it expires.

“That’s why it is important to have people on a standby list,” Ertl said. “If we have a no-show or a cancellation, we can give someone a call to be in here within the hour.”

“If our intensive care units are getting overwhelmed, we have to take some measures,” Vyse said. “We need to get by the next couple of months here so everybody that wants a vaccine gets a vaccine.

“Hopefully, that will get us closer to being able to shut down the widespread transmission of the virus."

He said all three vaccines currently in use are effective against the UK variant, which will be the dominant one in Alberta.

“The vaccines, at worst, have some immunity against those, (the variants),” Vyse said. “Maybe not preventing transmission completely, but at least will have less severe disease.”

At present, Alberta Health Services is at Phase 2B for vaccines, which is Albertans born 2005 to 1957 (16 to 64) with eligible high-risk underlying health conditions. For more information go to albertahealthservices.ca