After results were announced the evening of May 14, the Foothills Composite High School (FCHS) technical programs were represented in the upper echelon.
May 20, 2021 8:00 AM By: Brent Calver 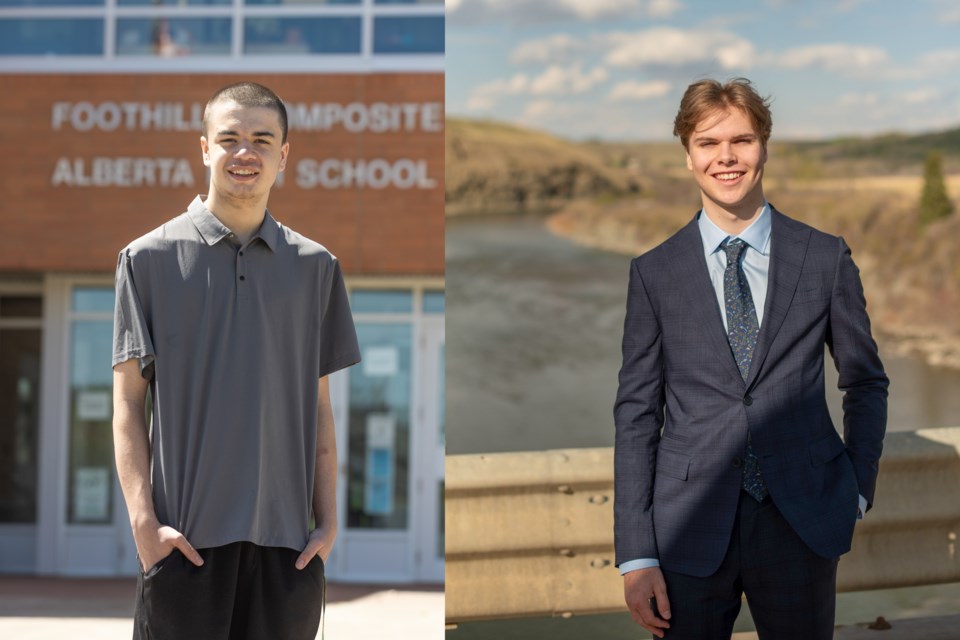 After results were announced the evening of May 14, the Foothills Composite High School technical programs were represented in the upper echelons.

Among them were two gold medallists, Braedan Parker, who took gold in Electrical Installations, and Will Sutton who took top spot in Graphic Design.

To Sutton, the award is validation for a passion he’s pursued for three years.

“The recognition is awesome, not only for my friends and family, but for the school and community,” he said. “It was a big surprise to me, I didn’t really expect it coming.”

He started out in Grade 10, learning basic communications technology from teacher Ben Stevens, before choosing to specialize in Florlyn Doyle’s Graphics Design class.

“Knowing I’m good at something I like to do, it feels good," he said.

Sutton plans to enrol at UBC Okanagan to study business and economics, letting his passion for graphics remain more a hobby.

He doesn’t plan to let the talent atrophy though, intending to utilize it as an asset in any future pursuit.

He said in the summer before going to university he plans to use his graphic designs skills by working for small business clients.

Doyle has had Sutton as a student for the past two years.

“It's a pretty tough competition, and so it's absolutely incredible,” Doyle said of Sutton's gold. “We’re so excited to have Will represent our school.”

“I keep telling him ‘What am I going to do without you next year?’" Doyle said. "He’s such an incredible kid."

Parker, a construction student, was representing the trades side, having learned his craft in the newer electrical program in teacher Cyril Reschny’s construction classes.

While he had begun learning the skill in Grade 11, the pandemic put a hamper on his plans to compete Skills Canada as the competition was cancelled.

“Getting in this year, it feels good,” Parker said. “I was happy to even compete this year, let alone get the medals.”

With students in a tug-of-war between in-person and at-home learning, it was a blessing for Parker to pursue his solo work in the workshop.

“Being able to get in the shops and practise all the wiring and stuff, it was a great help,” Parker

The competition session also occurred in the shop.

Following graduation, he said he’s hoping to secure an apprenticeship in the electrical trade with a family friend’s business.

As regular classes moved online, he credited his teacher with ensuring his success in the program.

Reschny said the enjoyment of the work is a major driver for employment.

“I always tell the kids if you enjoy it, and you like it, the next step is looking for an apprenticeship,” Reschny said.

The teacher-student duo both also credited an industry professional and Comp alumnus, Jack Graham, for passing on a wealth of skills.

“Jack did a great job of coming in and just working with him and going over stuff. I appreciate that,” he said.

“That’s the kind of stuff we love to see at the school is the alumni kids or anyone that’s willing to give back to kids that want to learn.”

Parker and Sutton will now represent Team Alberta in the national Skills Canada competition from May 25-30.

Full award listings can be found at: