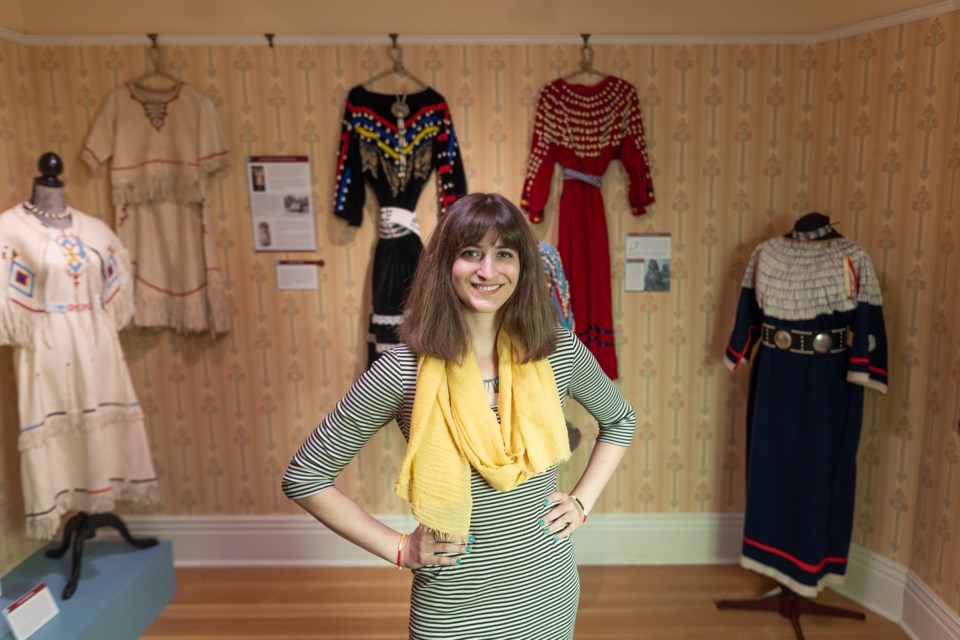 Alyssa Koski stands among the exhibit about 100 years of Blackfoot women's fashion at the Okotoks Museum and Archives on June 9. The exhibit is largely collected or made by her family, specifically her grandmother Pauline Dempsey, a survivor of the residential school system and daughter of James Gladstone, the first indigenous Canadian senator.Brent Calver/OkotoksTODAY

The Okotoks Museum and Archives re-opened its doors with a display of indigenous fashion at the forefront.

“We’re thrilled to be opening again to the public on June 10,” said Kathy Coutts, museum and archives specialist at the museum, which is set to open in Stage 2 of the Province’s Open for Summer plan.

“It’s been a long, dark winter, and we’ve got so much for people to see once they return.”

Front and centre at the museum, she said, is Alyssa Koski’s exhibit, A Century of Blackfoot Women’s Styles.

“There’s just some interesting history there, and how the history of what was going on around them informs the different fashion choices,” Koski said.

“It talks about that, as well as the differences between some of the different fashion choices among bands.”

The exhibit is close to her heart, with most of the items in the exhibit, including traditional Blackfoot dresses, headdresses, jewelry, and other apparel being collected or made over decades by Koski’s grandmother Pauline Dempsey to preserve the styles and craft of Blackfoot fashion, from approximately 1850 to 1950.

The work to preserve the clothing styles was started by Dempsey, who Koski said would travel with the pieces in an exhibition titled A Century of Style.

“She’s always been somewhat active in the community, and spreading awareness for the Blackfoot community,” Koski said.

“This collection has always been a way for her to express and show the value of Blackfoot designers and how there was a lot of creativity and a lot of fashion focus in the community that sometimes doesn’t get a lot of acknowledgement.”

Throughout the exhibit’s artifacts and historic apparel are anecdotes about the pieces that give insight to indigenous life over Alberta’s history.

At the age of five, she was required by law to be sent to a residential school near Cardston.

Among the items on display are a Dopey doll from Disney’s Snow White, which Dempsey was given by staff at the school as a reward.

“She’s passed it on to me to continue that work, which has been really, really exciting and a huge honour,” she said.

“There are some beautiful pieces in the collection.”

The exhibit was slated to open almost a year ago, but pandemic-related closures resulted in it being held over.

Being able to open the exhibition for in-person viewing is an important aspect for Koski.

“It would be very nice for people to experience the clothes in person, because you miss a lot of the details through pictures,” she said. “You don’t quite get the same feel.

“Seeing the different fashion influences, how the different tribes influenced one another, how the times were changing, and just the ingenuity and what was used to decorate (the clothing) just brings a kind of awareness that sometimes gets overlooked.”

The exhibit will run until the end of July, Coutts said, and occupies the main floor of the museum.

There’s more to be found upstairs at the museum.

Two other exhibits on display are Sirens in Service, detailing the history of firefighting, police, and ambulance service in Okotoks, and “House Calls and Close Calls” delving into the time of the Spanish flu in Okotoks.

“All timely topics on display at the museum,” said Coutts.