Residents asked to make origami contribution for exhibit dealing with end of Second World War
Aug 1, 2020 10:00 AM By: Bruce Campbell 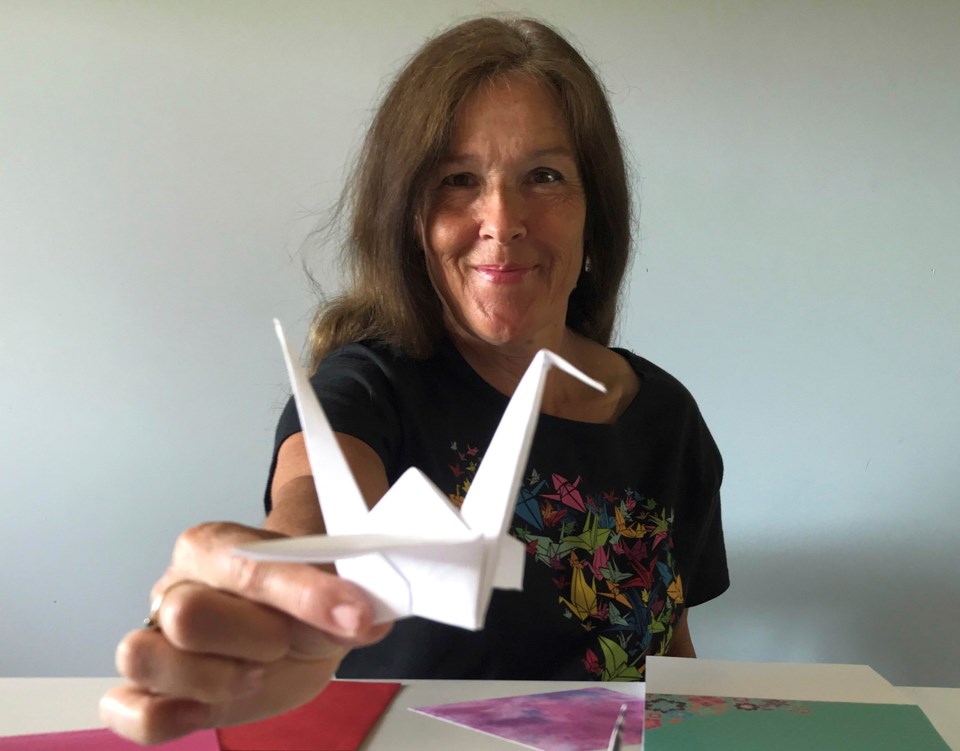 Kathy Coutts with the Okotoks museum folds paper cranes for its The Paper Crane Project as part of it Victory Over Japan exhibit on Aug. 15 to Nov. 11. The public is asked to create some paper cranes and donate them to the museum to be put on display. (Photo submitted)

Okotokians are asked to do some folding and art to commemorate the 75th anniversary of Victory Over Japan Day.

The Paper Crane Project is part of the Okotoks Museum and Archives’ exhibit to recognize the end of the Second World War, said Kathy Coutts, Okotoks museum and archives specialist. The exhibit will run Aug. 15 to Nov. 11.

And what is needed is origami style paper cranes.

The idea came after the history buff visited Pearl Harbor a few years ago.

“I bought myself a paper crane t-shirt and it told about the Legend of 1,000 Cranes and I put that in the back of my mind that when we get around to the 75th anniversary of the end of World War II, I should do a crane project to encourage the public to fold cranes,” Coutts said.

VJ Day is Aug. 15, when Japan surrendered to the Allies, effectively putting an end to the Second World War.

The cranes have long been a symbol of luck and good fortune in Japanese culture and, in more modern times, have become a symbol of peace and healing, she said.

The legend involves creating 1,000 origami paper cranes, which will give the individual his or her most desired wish.

In the 1950s, 12-year-old Sadako Sasaki, a survivor of the Aug. 6, 1945 bombing of Hiroshima, developed leukemia. She began folding 1,000 paper cranes with her wish being for world peace. She died before getting to the 1,000 mark. Her classmates then began folding to get to the desired amount. As a result, the paper cranes have become a symbol for the hope for world peace and healing.

Coutts is hoping the Okotoks public will get involved.

“It provides a way for the public to become engaged in the marking the end of World War II,” Coutts said. “Trying to find a way to make it more meaningful and engaging to the public.”

The paper cranes can be dropped off at the Museum from Wednesday to Saturday from 11 a.m. to 5 p.m. There is a basket at the museum to place the cranes in order to respect COVID-19 protocols.

She said the cranes can be dropped off after Aug. 15 as well.

There will also be artifacts and memorabilia about Okotoks and the end of the Second World War.

The museum has had tributes to the milestone 75th anniversaries of the Second World War.

It had a virtual exhibit due to COVID-19 in April of the liberation of Allied prisoners of War. It had an exhibit for Victory in Europe Day in May.

The VJ Day display will be on display at the museum until Nov. 11, Remembrance Day.

For more information and a tutorial on how to fold a paper crane, please visit the Okotoks Culture and Heritage Facebook page. www.facebook.com/OkotoksCulture