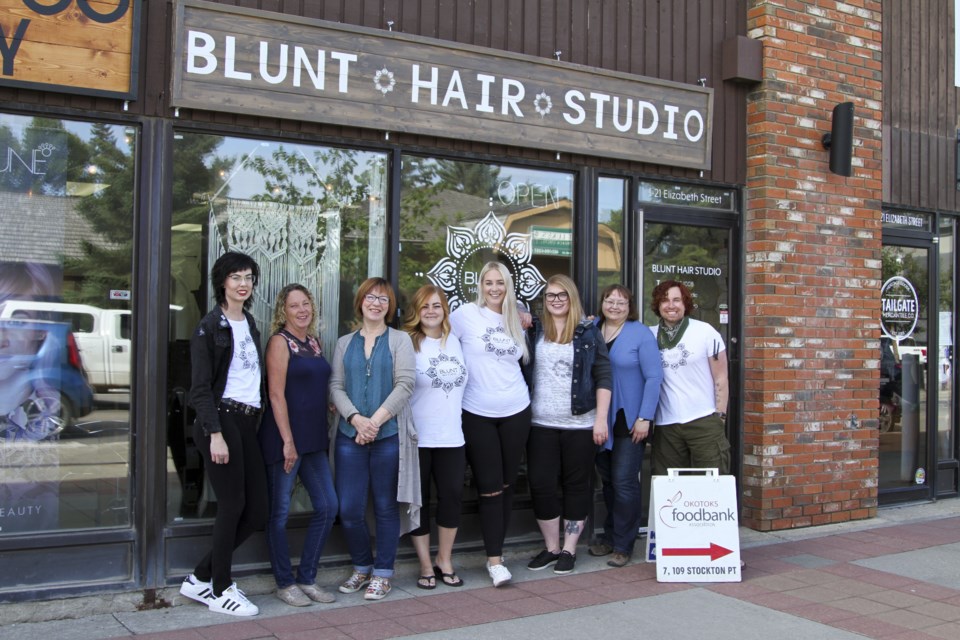 The Okotoks Food Bank and Blunt Hair Studio took a pair of sheers to back to school preparations for families in need in the community.

The partnership—with the addition of treats for the students provided by 94 Take the Cake—saw the five hairstylists at Blunt donate their work day on Aug. 26 to give students free haircuts to make that first day of school a breeze.

Sandi Courtorielle, volunteer co-ordinator at the food bank, approached Blunt Hair Studio with the idea to do free haircuts as a way to take some of the extra burden off families in need during the back to school season.

“Anything that we can help alleviate—the reason they’re at the food bank is because their money isn’t going as far as it should,” she said. “If they have one thing that goes wrong with their car or somebody gets hurt and they can’t work, then they’re in real dire straits.

“I just thought that this would be one less thing they would have to pay for at this time, so it might help out the family as a whole.”

Courtorielle said she got the idea after she was at Blunt this time last year for a haircut and saw a family with four boys getting their back to school cuts.

“I thought ‘wow, that’s going to cost her a lot of money,’ and I started thinking yeah, that costs our clients another thing at this time of year,” she said. “And it’s expensive, back to school—all the fees and getting ready to go back to school.”

Michelle Morrison, owner of Blunt Hair Studio, said being involved was a no-brainer for the hairstylists.

“It’s really close to our hearts,” she said. “We’re all locals here in the Foothills community and we like to be part of the community as much as we can.

"We really are happy to give these kids a salon experience that might help boost their self-esteem going into the new school year, help them feel a bit better about themselves and entering into a time of the year where it’s really hard on the kids to go out and make new friends.”

The stylists at Blunt had 55 students sign up through the Okotoks Food Bank, which Morrison said was definitely a full day for them, completely free of charge.

As independent contractors renting space to run their own businesses rather than employees, each of the hairstylists at Blunt volunteered their work day to do their part in the initiative.

“It’s so awesome to have a community in (Blunt) where everyone is willing to step up and be involved, and volunteer their days for things like this,” said Morrison. “We always like to be involved in the community, so I’m pretty proud of my team for stepping up to the plate today.”