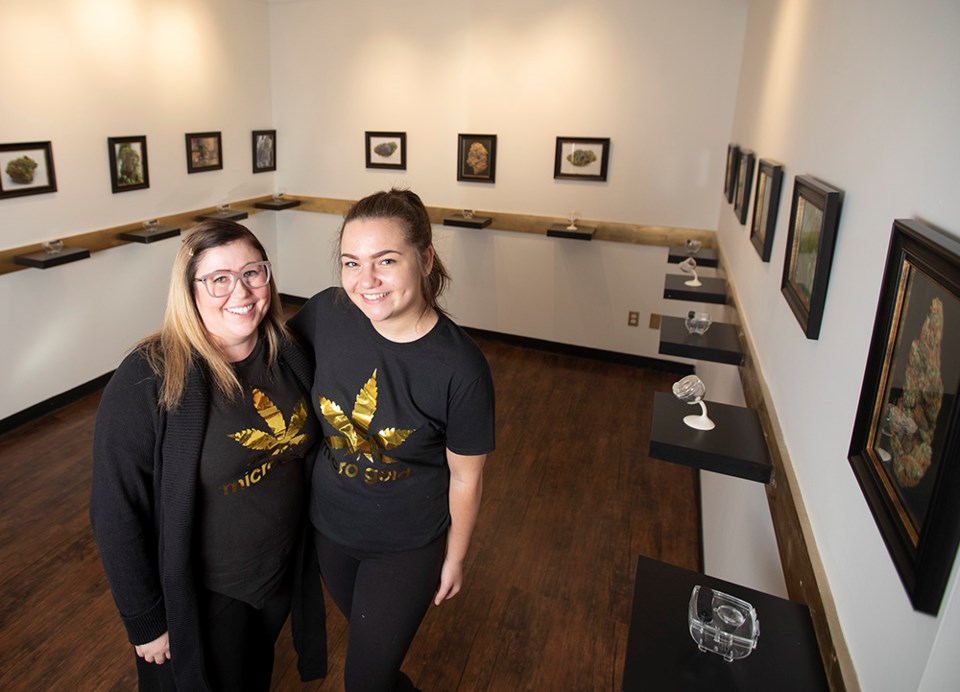 Micro Gold Cannabis Retail manager Kate Gilbert, left, and staff member Camryn Likely in the showroom on Dec. 12. While officially open, Okotoks’ first would-be recreational cannabis retailer is without product due to a nationwide shortage. The AGLC has suspended new licensing until supply can catch up with demand.

Micro Gold opened on Dec. 8 at 220 North Railway Avenue, but for now it is basically a nicely-designed head shop selling accessories from pipes to containers but there isn’t a bud to be found.

“We have been approved, however, we are on hold for our licence until the AGLC (Alberta Gaming Liquor and Cannabis) gets more cannabis supply,” said Camryn Likely, of Micro Gold Cannabis Retail in December. “Most of the retail stores in Alberta have been dry.”

Kate Gilbert, marketing manager for Micro Gold, said all of the proper paper work and inspections with the Town of Okotoks were completed when she received the word there was a marijuana shortage for suppliers.

She said the store has received verbal commitment from the AGLC it will get a licence to sell cannabis shortly after the government agency has enough marijuana to supply more stores.

Gilbert admits it’s frustrating to be a cannabis store with no cannabis.

The silver lining is Micro Gold will be more than ready when the product is in Okotoks.

“We have had time to really make sure we have a stable business plan,” Gilbert said. “And we have been building lots of relationships with the people in Okotoks which I feel will make us a stronger business in the end.”

Adding to that frustration is there are 15 staff members, who have gone through the required training, ready to get to work, she said

“Until we are at the point where we are getting more from the licensed producers, we won’t be adding additional licences,” said Kaleigh Miller of AGLC communications said in December.

She did not know the specifics with Micro Gold, but said that those stores, which were in the queue for licences could remain in the line up or withdraw their application and get their money back for licensing fees.

She said licences won’t be issued until the hold on the product is lifted.

“It could be early in the new year or the end of next year. We really don’t know.”

She said Alberta has the most retail cannabis stores in Canada.

“We continue to get stock in all the time, it’s just not at a steady rate that we are comfortable to continue to issue licences,” Miller said. “We don’t want to have a whole bunch of more stores and then not have any product for them. That would be devastating financially for them.

“This is not a great situation for those who are in the business, but I think the alternative would be even worse.”

Marijuana is still available at albertacannabis.org.

“There are quite a few things that are out of stock but there is product still available,” she said.

When Micro Gold does open its doors, the pot will be locked in a safe.

There will be enclosed bowls in which customers can smell the product — they cannot sample it. Information about the product will be on display. When the customer has decided what type of marijuana he or she wants, a Micro Gold staff member will retrieve the product from the safe.