The Okotoks Elks Club has been hosting a Saturday farmers’ market at the Elks Hall since July 4, drawing hundreds of people to browse displays of fresh vegetables, art, canned goods, baking and other wares.
Oct 12, 2020 8:00 AM By: Tammy Rollie 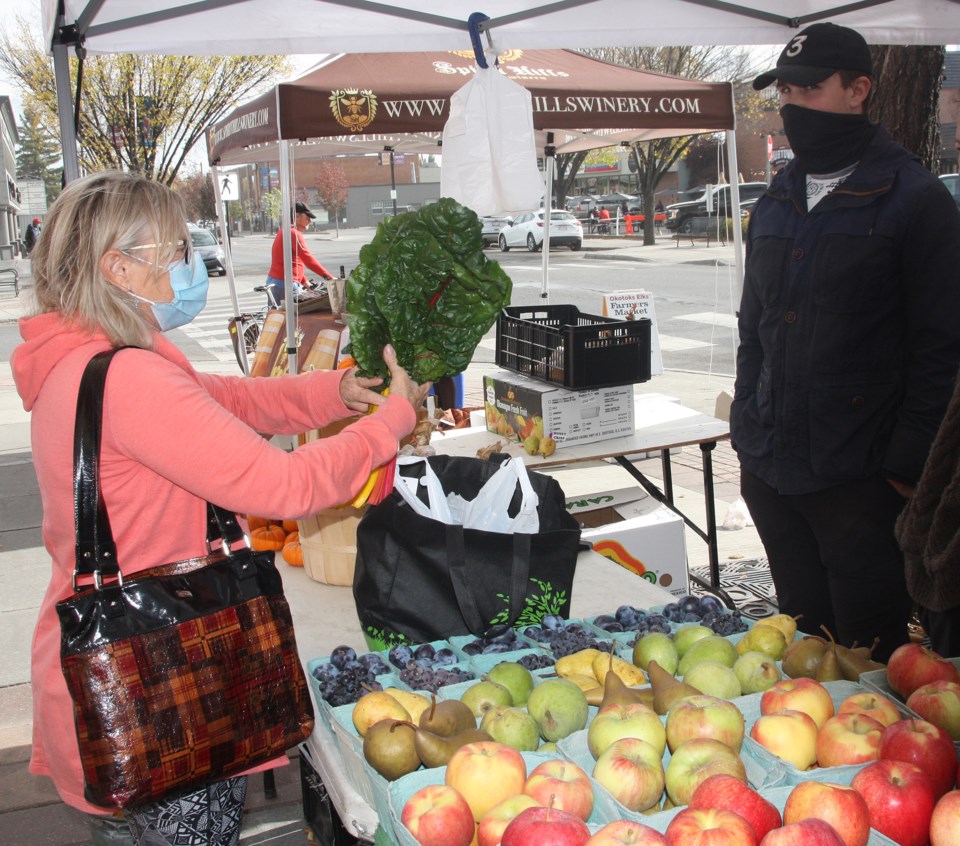 Debbie Posey buys vegetables from Parker Smith with Walker's Own Produce at the Okotoks Elks Club Farmers' Market on Oct. 10 - the last day of the market this season. (Tammy Rollie/Western Wheel)

Elizabeth Street has been bustling with activity the past three months with help from an indoor/outdoor market hosted by a long-standing service group.

The Okotoks Elks Club has hosted a Saturday farmers’ market at the Elks Hall since July 4, drawing hundreds of people to browse displays of fresh vegetables, art, canned goods, baking and other wares from 11 a.m. to 3 p.m.

“For our first market it has gone considerably well,” he said. “A lot of our customers got to know the vendors by name.”

Davies said the market brought 55 vendors - about two dozen each week – to sell locally-made, baked and grown products in what he calls a true farmers' market.

The market not only brought locally-made and grown products to customers, but customers to people like Airdrie artist Brad Holt.

Alberta Health Services regulations surrounding the COVID-19 pandemic provided few opportunities for Holt to exhibit his art, which has been on display previously at the Calgary Stampede and Spruce Meadows.

When friend Davies invited Holt to the market, he was immediately on board.

“It’s nice to get my work out in the public and get a presence,” he said. “I’ve made quite a few sales.”

Nadine Smith of Calgary, who owns and operates Homemade Keto Baking by Nadine, said the market helped increase exposure for her business.

“It’s been one of the better markets,” she said, adding she’s also exhibited at the Okotoks Farmers’ Market and markets in Bowden, Crossfield and Strathmore. “It’s been steady. I’ve gotten new customers from here.”

“I decided two or three years ago to buy as much local as I could,” he said. “It doesn’t cost that much more. There’s a wide selection and the market is good for the whole area.”

Moira Watson of Walker’s Own Produce not only sold fresh fruits and vegetables grown by farmers from the Okanagan to Lethbridge, but offered words of advice to gardeners.

“We discuss the products and people also come to us with gardening questions,” she said.

Watson found the Okotoks Elks Farmers’ Market to have more of a community feel than most other markets due to its downtown location.

“This has a really nice neighbourhood feel,” she said. “It feels more integrated with the community.”

She and co-worker Parker Smith arrived early each Saturday to set up before heading across the street for breakfast at Sweetgrass Deli & Eatery.

Davies said one of the purposes of the market was to bring business to downtown.

In addition to raising money for the Elks Club’s charity programs, Davies said the weekly market supported downtown businesses and the community as a whole.

“We want to support our fellow businesses that are operating downtown,” he said. “It brings people down here to see what downtown has to offer.”

The Elks Club is now making plans to host a Christmas market during Light up Okotoks Nov. 20-21.

More details will be provided in an upcoming edition of the Western Wheel.