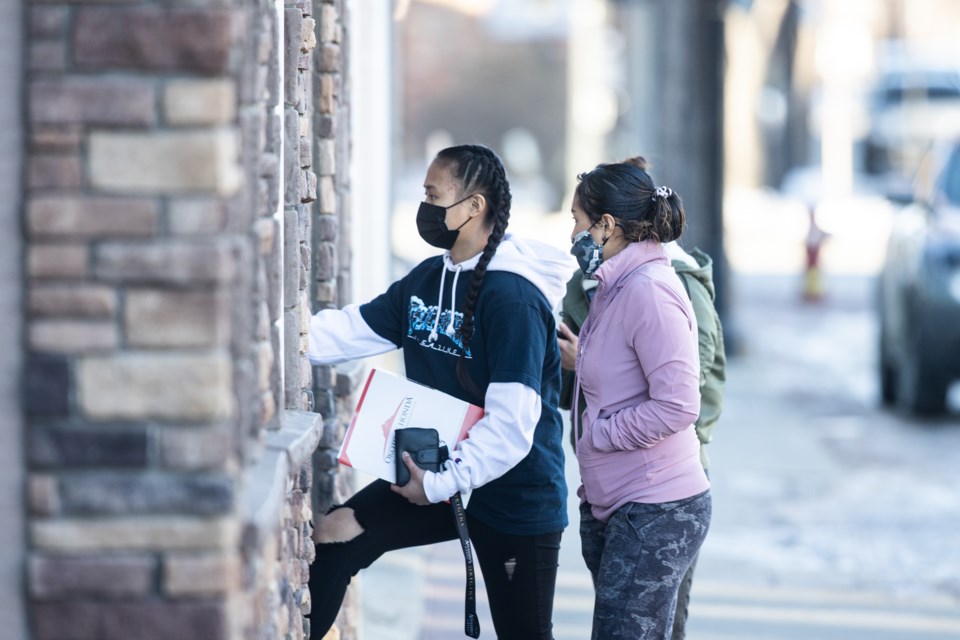 Customers wearing masks enter a business in downtown Okotoks on Jan. 14. The Town of Okotoks is keeping mask Bylaw 31-20 which mandates masks in all indoor public spaces unless COVID-19 cases in Okotoks drop below 15 for 30 straight days. | Brent Calver/Western Wheel

With both provincial legislation and a second bylaw in place, the Town of Okotoks is letting one of its masking bylaws fall off the books at the end of the month.

The Town’s municipal spaces mask bylaw, 28-20, was given third reading on Aug. 17 and came into effect Aug. 24, mandating face coverings be worn in all indoor Town facilities, including the Okotoks Recreation Centre, Foothills Centennial Centre, Pason Centennial Arenas, the Okotoks Municipal Building and Operations Centre, and the Eco Centre. Masks were also mandatory on Okotoks Transit.

At the same time, council approved a bylaw to make masking mandatory in all Okotoks public indoor spaces, including transportation services, should the number of cases in town reach 15. Bylaw 31-20 would remain in effect until the number of cases dropped below 15 for 30 consecutive days.

The bylaw came into effect on Oct. 26 when cases reached the trigger point of 15.

With this bylaw still in place and the Province mandating masking in all indoor spaces, Okotoks protective services director Kelly Stienwand said the Town’s initial masking bylaw is now redundant, as its purpose is covered under Bylaw 31-20 and provincial regulation.

“If the Province lifts the public health orders requiring masking provincially then we do remain covered by Bylaw 31-20 until the number of cases in Okotoks falls below 15 for more than 30 days,” he said.

He recommended allowing the bylaw to run its natural course and not extend its expiry date of Jan. 31.

“Should previous conditions addressed in this bylaw reoccur and be necessary to protect the health and wellbeing of our staff and citizens, administration would bring a bylaw forward for council’s consideration,” said Stienwand.

The Town’s bylaws stipulate penalties of $100 for failure to wear a mask in public spaces and $200 for failure to display mandatory masking signage at an indoor public facility. The provincial mandate carries a fine of $1,000, which he said is difficult for officers in the field.

“It is a bit of a challenge for our enforcement staff when they’re dealing with a variety of different situations,” said Stienwand. “A $1,000 fine is a very significant thing to issue. In some cases, it does impact the decision-making that they happen to do out on the front line.”

So far, Stienwand said people in Okotoks have been fairly compliant and officers in town are confident the fines in the municipal bylaw are sufficient.