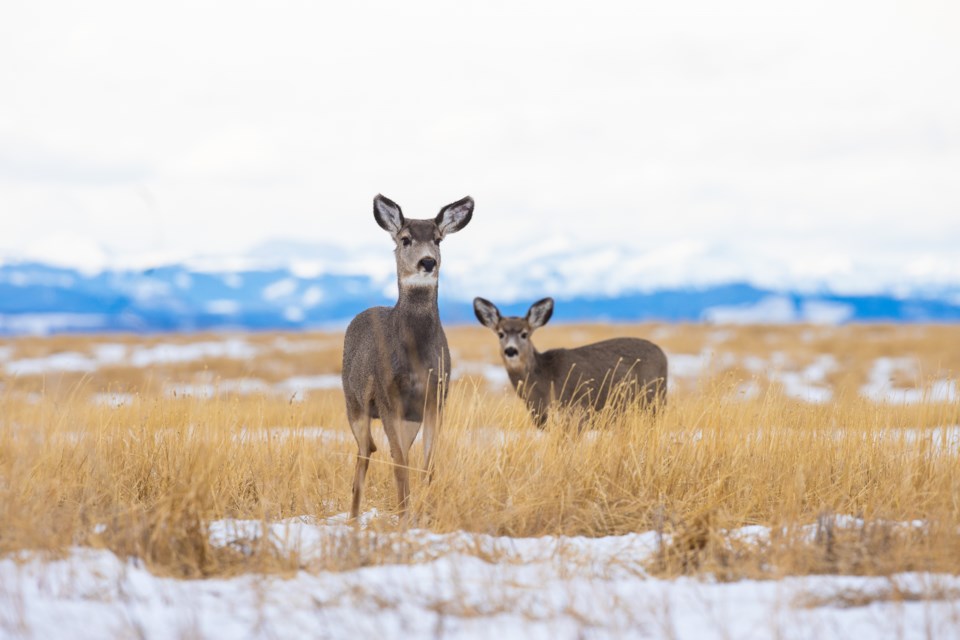 Deer graze in the field near Westland Street on Jan. 29, 2019. The Urban Deer Task Force registered about 108 mule deer within Okotoks boundaries during its 2020 counts in January. (Brent Calver/Western Wheel)

First steps have been taken to address growing urban deer issues in Okotoks.

The newly-formed Urban Deer Task Force met for the first time in November and In December the group had Alberta Environment and Parks give a presentation on urban co-existence with deer, and he said some of the facts were concerning, though not surprising.

“One thing brought up in that report is that urban deer are completely habituated to town and to people and they have no fear whatsoever, unlike the deer living outside of town,” said task force chair Grant Pryznyk.

To update statistics on the number of deer in town, the task force organized a third deer count on Jan. 22 and 23, using slightly different methods than previously.

The counts were done at dusk, between 4:30 p.m. and 5:30 p.m., because wildlife experts suggested deer would be most active at dawn and dusk, and therefore the counts would be easier to conduct because the animals wouldn’t be bedding down.

On Jan. 22 the count revealed 110 mule deer within Town boundaries or just outside its borders, and on Jan. 23 there were 106 counted, he said.

Okotoks parks manager Bridget Couban said the focus was on the developed areas of the town rather than its outer reaches.

“The footprint has expanded with the annexation land, so Westland Street is a good example where we saw deer in the fields, which are in the town, so they were included in the count,” said Couban. “But we didn’t drive all the way around the top of 338 Ave., we stayed to the built footprint of the existing urban environment.”

Pryznyk said the count data is important to determine the current population of deer in Okotoks as opposed to past counts, as well as what the future could hold.

In 2015 there were 66 deer counted and the 2018 count was near the same number, meaning the number of deer found in 2020 was nearly double what it was in previous counts.

It could have been a seasonal issue, or because of the time of day volunteers tracked the animals, said Pryznyk.

“It has not been confirmed whether the numbers have increased or if there has been a seasonal distribution difference,” he said.

He said the task force recommends completing future deer counts at the same time of day in both September and January to see whether the numbers change. The previous two counts were conducted in September (2015) and October (2018).

Data studied included reports of aggressive deer or damage in town, as well as talking to residents who had cited concerns. The task force intends to continue interviewing people who have had encounters or damage to get a better understanding of what they’ve dealt with, he said.

“From what we’ve heard so far we’ve identified two main areas of concern: public safety from dealing with deer conflicts, and damage to private and public property,” said Pryznyk.

Many concerns mention aggressive deer threatening people and harming pets, or deer colliding with vehicles while crossing roads, he said. In addition, people have logged damage to lawns, gardens, potted plants, and trees accessible to deer.

He said there is no firm data in either category, since most of the information is anecdotal. The only tracked instances are when animals are killed and taken to the landfill, and the Town of Okotoks monitors those numbers, he said.

Once sufficient data has been compiled, he said it will be possible to gauge whether the Town needs to take action.

There are a few moves municipalities across North America have made to curb their deer populations, but nothing is one-size-fits-all, he said.

“Other jurisdictions have tried a number of things – culling, hazing, sterilization, and increased public education,” said Pryznyk. “The task force’s review of experiences in other urban areas has suggested there is no single successful solution that can be applied to all situations.”

He suggested public education as the first step for helping deal with urban wildlife.

Mayor Bill Robertson said he agrees that continuing to inform the public about issues like letting dogs off-leash in parks or feeding wildlife.

He said cleaning up yard waste can also help deter deer, and some municipalities have gone so far as to fine their residents for not picking up crabapple or other vegetation from private property.

It continues to be a contentious issue in Okotoks, he said.

“There are quite polarizing opinions toward the deer,” said Robertson. “There are those that definitely love the deer, they love the wildlife, they wish there were more, they love watching them.

“At the other end of the spectrum there are those who severely dislike them because they can’t have a vegetable garden and so on.”

He said the Town is in a tight spot because there’s not much council can do. Wildlife in the community is a provincial issue, he said.

Pryznyk said the task force will continue to discuss potential options for handling the deer population or stopping them from entering yards to access food, such as encouraging higher fences or other deterrents.

The committee will work out strategies and then take their ideas and data information to the public for further input in about three to six months, he said.