When Margaret Sawatzky was diagnosed with dementia in June 2016, her husband Aubrey and the rest of their family didn’t know what all would come next. The one thing they wanted was to keep her at home as long as possible.
Sep 15, 2017 12:00 AM By: Darlene Casten 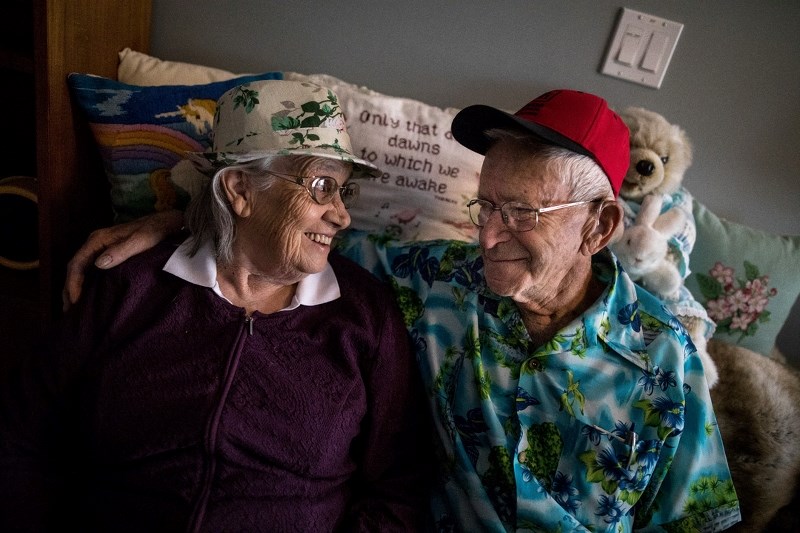 Margaret Sawatzky, left, gets daily visits from her husband Aubrey. She moved into Okotoks&#8217; Tudor Manor after she was diagnosed with dementia last year.

When Margaret Sawatzky was diagnosed with dementia in June 2016, her husband Aubrey and the rest of their family didn’t know what all would come next.

The one thing they wanted was to keep her at home as long as possible.

“We as a family thought we should be able to look after her,” Aubrey said.

Margaret was able to continue to live in her home until December when a doctor advised she needed more care and she now lives at Okotoks’ Tudor Manor.

A pilot program running in Calgary and Okotoks is trying to make it easier for people like Margaret and Aubrey.

The Brenda Strafford Foundation is running a three-year dementia-friendly community pilot project in Okotoks and in a southwest Calgary suburb. The project is already just over one year into the planning stage.

The first moves to create community awareness will start next month.

Jennifer Mallamo is the dementia-friendly community co-ordinator in Okotoks. Over the next month she will be training staff at two banks about the signs of a person with dementia and ways to support and assist people suffering with the disease.

“They may require a bit more patience, you may need to speak more clearly and slowly, they may need a bit more time,” Mallamo explained.

She will start by training staff at the Okotoks TD and ATB banks in September and October and has reached out to local restaurants and churches as well. Mallamo said there has been interest for more training from local businesses and service groups.

They are also compiling a list of services available in Okotoks that can assist people living with dementia. A resource fair for seniors will also be held at Tudor Manor Oct. 13 and 14 that will allow people to see what type of assistance is available for the elderly.

The goal is to give people with dementia more time at home and the capability to carry on the their lives in their community.

“We are enabling people to living in the community longer before they have to consider moving into another facility,” she said.

The Brenda Strafford Foundation runs the Tudor Manor supportive living facility in Okotoks, which has a wing for dementia patients.

That is where Margaret now lives. Aubrey said she got to the point where safety became a concern.

He now visits her almost daily and said he is grateful for the time she was able to stay at home with him.

Without community support, Aubrey said it would have been very difficult to continue having Margaret at home.

After her diagnosis they were referred to home care by their doctor and home care referred them to respite, which allowed Aubrey to leave the house to run errands and live his normal day-to-day life.

Margaret was starting to say things like she wanted to go to Saskatchewan to visit her family or demanded to be taken to the airport and threatened to walk there if Aubrey wouldn’t take her. He said he lived in fear of her taking off.

“I couldn’t leave her alone,” he said.

Aubrey was also directed to a support group for people with family members suffering from Alzheimer’s.

He said it’s important that people who serve the public are aware of this disease.

People living with dementia can have outbursts or become confused when they are out in public and now people may know why and how they can handle it thanks to this program, he said.

“It is education in the right way,” he said.