Okotoks brewery offering charity a cut of its golden ale

Hub Town Brewing owners Mark and Lisa Watts are launching their Every Ounce Counts fundraiser in February, giving a portion of the profits from their best-selling 1882 Okotoks Golden Ale to a different charity each month.
0
Jan 25, 2020 1:30 PM By: Krista Conrad 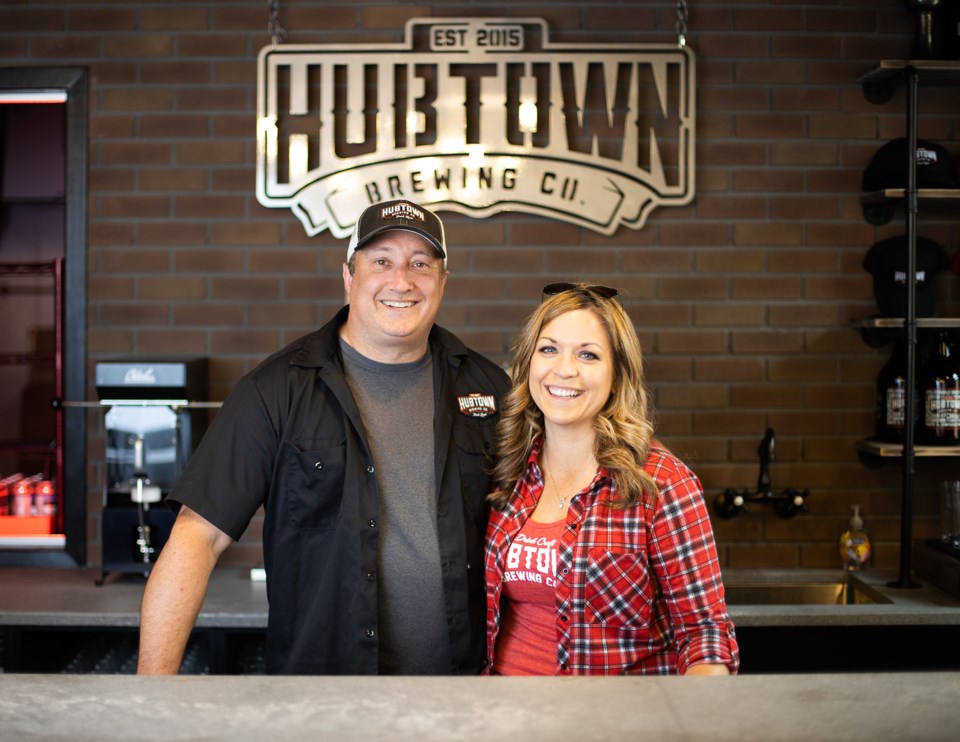 Hub Town Brewing owners Mark and Lisa Watts are launching their Every Ounce Counts fundraiser in February, giving a portion of the profits from their best-selling 1882 Okotoks Golden Ale to a different charity each month. (BRENT CALVER/Western Wheel)

Patrons can do more than wet their whistle when they pop into Hub Town Brewing.

Starting in February, the Okotoks brewers are launching a new fundraising campaign, called Every Ounce Counts. A portion of sales from Hub Town’s 1882 Okotoks Golden Ale will go toward a different organization each month.

Each month will kick off with a party featuring the chosen charity.

“They can come in and talk to everybody and tell them what their goal is, what they’re after, what they’re hoping to raise and what their cause is about, hopefully make a bunch of new connections, that sort of thing,” said Lisa Watts, co-owner of Hub Town Brewing.

The month closes off with another party to announce how much was made and give the charity the chance to address brewery patrons and express their thanks, she said.

Organizations were invited to submit their requests for funding to Hub Town in December, but it wasn’t any ordinary application form. Watts said they wanted to get the personal touch and really find out the story behind each group and what was important to them.

For February, the charity of choice is Big Brothers Big Sisters of Calgary and Area.

“We asked them to make it more personal and have the conversation, and the conversation was perfect. It was beautiful,” said Watts. “It was talking about how the mentors and the mentees succeed from a program like this.”

She said the idea behind the organization hit home for her, because she is a mentor for students at SAIT as an alumna of the school’s oil and gas program.

“I know mentorship is an incredible experience,” said Watts. “It can be really great for everybody.”

With a small space she said the amount they can sell is limited, so she doesn’t expect the donations to be a huge amount – though their sales of the beer from local restaurants like Tom’s House of Pizza, Big Sky BBQ Pit, Canadian Brew House (if they choose the 1882 variety) and Bravo Pizza will also count toward the total dollars raised.

It’s just a nice way to help out the community and give back to Okotoks in the way the town has supported their business, she said.

“How else do you say thank you?” said Watts.

Kristy Packwood, mentor co-ordinator for Big Brothers Big Sisters in Okotoks, said any amount raised will be helpful for programming and mentor recruitment.

In fact, the group is using the launch party of Every Ounce Counts as a meet-up event where potential mentors can get information about how the program works, she said.

“If someone is thinking about becoming a mentor, it’s the perfect time to start that process,” said Packwood. “We have 13 children and youth waiting right now for a mentor.”

In 2019, Big Brothers Big Sisters had 19 matches for one-to-one mentoring and served a total of 150 children including the group school programming. Their goal is to serve 200 in 2020, she said.

Community-based mentors will typically spend two to five hours per week with a child who has similar personality, interests and skills, she said.

There is always a wait list for mentors, because children are not matched up on a first-come, first-served basis, but based on the skill sets and interests of the volunteer mentors available, she said.

Packwood said it’s still important for people to put their children on the wait list, because there could be a perfect match waiting for them in the community, and it can make a world of difference for a child.

The program focuses on youth who have experienced some form of disruption of trauma in their lives, such as moving to a new community and feeling isolated, divorce or separation of parents, death or chronic illness in the family, and even being an only child without family nearby.

“We know that the more adults consistently in a kid’s life, there are higher rates of self-esteem and success and being confident going out into the world,” said Packwood. “They’ve got one more cheerleader in their corner for them.”