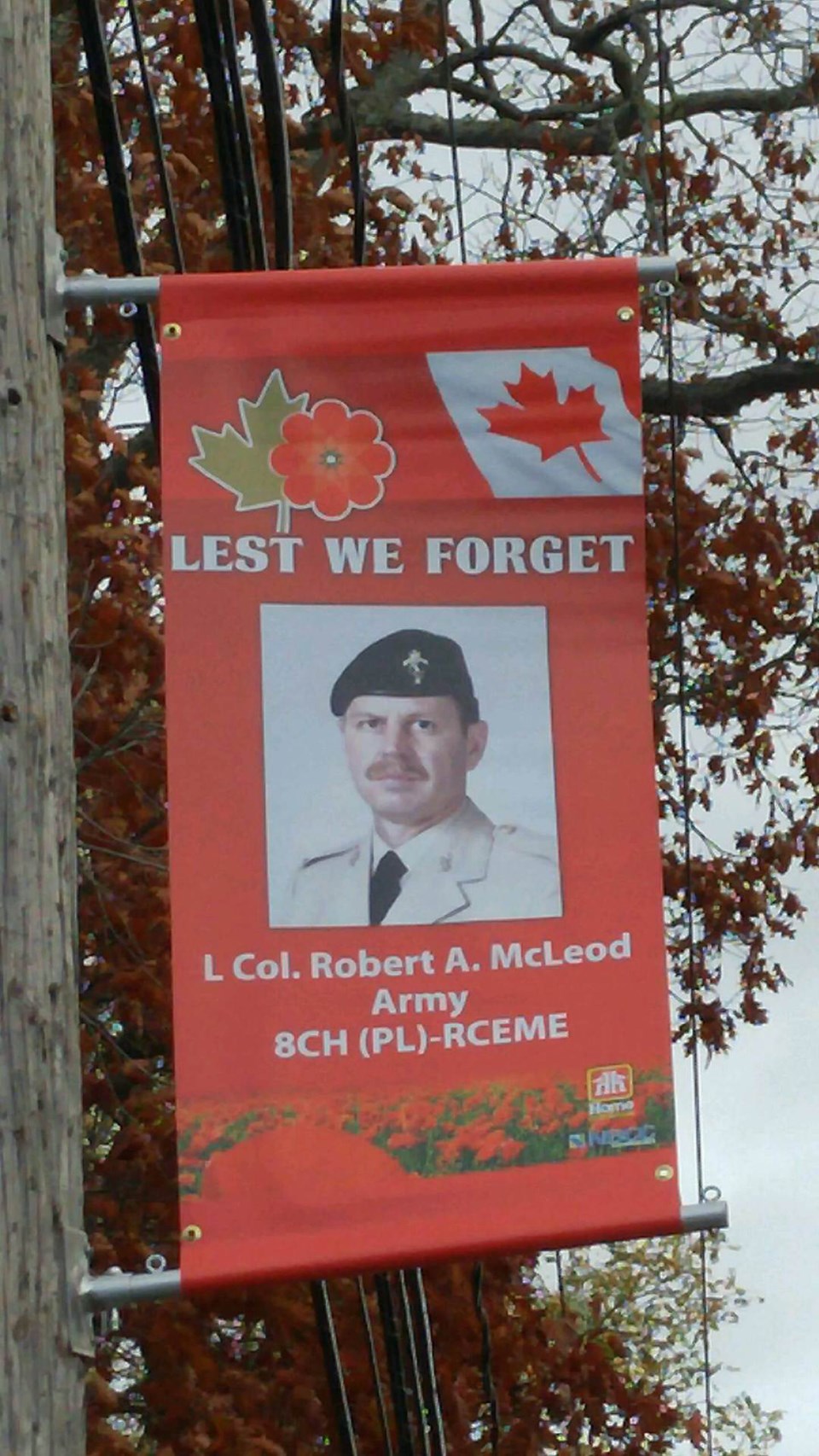 A banner of Okotoks Royal Canadian Legion president Bob McLeod which hangs in his hometown in New Brunswick. The Okotoks Legion is launching the Memorial Banner Remembrance project in which banners recognizing Foothills area residents who served their country will be displayed along Veterans Way. (Photo submitted)

It’s going to be a banner month for those who have served or are serving Canada.

The banners are scheduled to be hung along Veterans Way during November.

“The Town is going to (adjust) the 13 lamp poles on the west-side of Veterans Way – they will each hold two so that will be 26 banners,” said Okotoks Legion president Bob McLeod. “The Town has been quite helpful in working with us.”

The Town is doing the work on the lamp posts which should be ready for the banners by the end of October –  ideal for November and Remembrance Day.

The banners can be purchased by relatives, friends, employers or anyone who wants to pay tribute to those who served Canada. The military women or men on the banner do not have to be from the Okotoks and Foothills area, but may have family who wish to recognize their service to Canada and the Commonwealth.

“Generally it is going to be families of veterans,” said McLeod, when asked who will be buying the banners. “Our intention is to defray the cost to support the banners.”

The project is not a fundraiser for the Legion, but is an effort to help show appreciation for those who have served Canada.

“We are selling them at cost,” said Okotoks Legion member Malcolm Hughes. “Fortunately, we are so well supported during our poppy campaign, we don’t need to use this as a fundraiser.”

Each banner will have a photo of the individual being recognized, the Okotoks and Legion logos, the Maple Leaf and/or the Union Jack.

Those purchasing a banner are asked to provide a photo of the individual, his or her name, the service or regiment they served, the war/campaign or years of service; the flags they wish displayed.

The banners are made of heavy vinyl and are approximately 24 inches by 64 inches. They are built for the long-term – an estimated 20 years if hung for one month a year.

This is not expected to be a one-year phenomenon. The banners  will hang from the end of October and all of November – the Remembrance Period. They will then be stored at the Okotoks Museum and archives for use in later years during the 11th month.

“We feel, and this has been the experience of other legions, that once people see the banners up, there are significant increases in banners in the second and third year,” Hughes said.

When more banners are hung in the future they will be along McAlpine Crossing.

The banner project has been running in other communities across Canada and steadily grew in popularity.

“In Invermere we had about 30 banners initially but if you go down there now in November, the whole Main Street and both the side streets have banners on them,” Hughes said.

The estimated costs of the banners are:

Payment can be made by e-tranfer to Hughes at hugmal37@gmail.com, or by cheque or cash to Hughes or to McLeod.