Memories of fighting in the Second World War 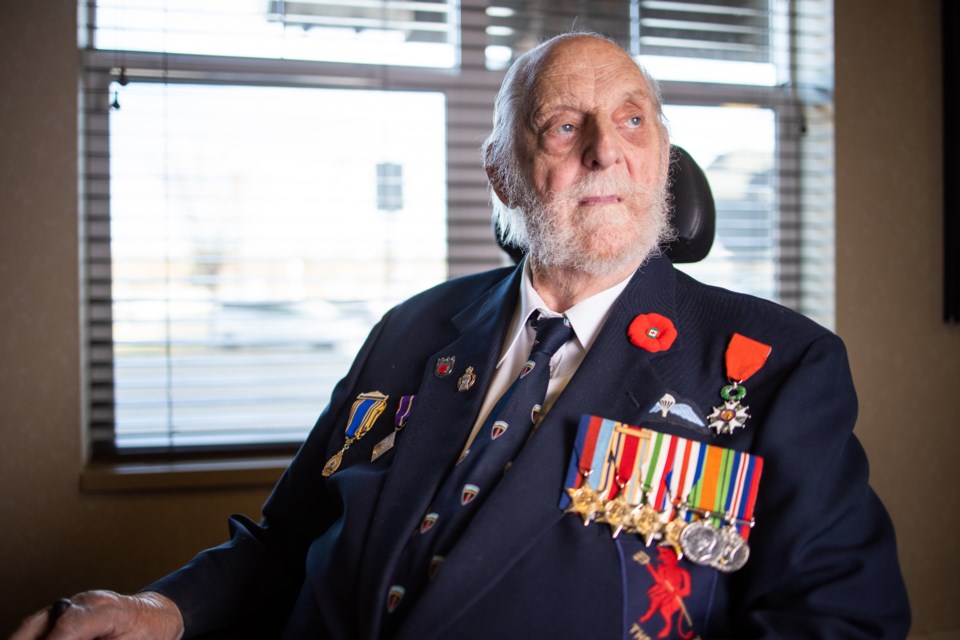 Remembrance Day carries special meaning for an Okotoks resident who served with the British army in the Second World War.

Ian Walker, who is 96 years old and living at The Heartland, said he was eager to join the service as a young man. He was just 18 when he signed up in 1941 – though it was more difficult to join than he’d anticipated.

“I tried to get into the air force and I was told I couldn’t join because I’m colour blind,” said Walker. “So I thought I’d try the navy, and they caught me out and said, ‘No, no,’ then the only thing left to get into was the army.”

He laughed as he recounted a conversation with the sergeant major in the recruiting office whose medical exam consisted of asking whether he could stand up.

Walker was proud to be part of the British army.

“There was no question,” he said, when asked about why he joined. “The country was at war.”

His first foray into the war was in North Africa, fighting in the desert against the Italians and then the Germans. Walker said it was difficult with water rations at one pint per day – and half of that had to go to rehydrating dried food packets.

“The desert was really survival,” he said. “You didn’t drink water at all. You made tea. You got the tea down to sludge and used that to wash yourself.”

He once travelled with four other men in a truck for 300 miles over a weekend just to put his feet in the Mediterranean Sea.

His main role in Africa, as part of the armoured car division, was medium reconnaissance – driving forward until they were being shot at, then retreating and reporting to the infantry.

Walker was sent into Sicily during the Italian campaign, then returned to Britain to get a commission from military college. He joined the Sherwood Foresters, a line infantry regiment based in Nottingham.

He was transferred into the Inns of Court Regiment, and it was with that corps he landed on the beaches at Normandy on D-Day, June 6, 1944. As in Africa, his job was to do medium reconnaissance.

Landing in Normandy is still one of Walker’s most vivid memories.

“It was so massive, and there were so many people involved,” he said. “It was a very hectic time.”

He was in an armoured car on board a landing craft tank and followed two scout cars down the ramp onto the beach. A mine blew off the front wheel of the armoured car, which was quickly cleared away by the engineer crew in a small bulldozer.

There was a radio on the car, and next to that a “rag” (an old pair of underwear) for wiping off the dials should they get covered in water or mud. That was the only thing he was able to grab as his crew ran up the beach.

“I was the only person in the regiment who landed with nothing but a pair of underwear in his hands,” Walker said with a chuckle.

He said Normandy was an incredible feat, and he has since often wondered what the Germans thought when they saw 10,000 ships seemingly stacked up out of nowhere when dawn broke that day.

“They must have had a fit,” said Walker.

A couple more light-hearted stories came out of the days following the landing in Normandy, he said.

There was a quiet moment after storming the beaches, when the infantry moved ahead, but the armoured car unit hadn’t been called up yet. So the crew was sitting on the cars, making up tea, when they saw a black dog come out of one of the presumably empty German pill boxes.

Pill boxes were blockhouses, concrete dug-in guard posts with small holes in the wall for firing weapons. Some were deeper, and this particular one was three levels, said Walker.

“We thought, if the dog was in the pill box maybe there must be somebody else in the pill box,” he said. “So we took precaution and we rooted around but didn’t find anything until the bottom level, hiding in the corner behind some packing cases were two slave labourers, two Polish men.”

They were hiding from the Germans. Walker’s crew brought them out and gave them food, but they didn’t seem to be attached to the dog, he said.

So when the crew began making its way inland, they attached a box to the back of Walker’s armoured car and the dog travelled with them through France, Belgium, and Germany, until they finally arrived in Denmark and he was left with a family there.

It was a harrowing journey for the pup, as the armoured car unit took on gunfire regularly. Walker asked the sergeant following him whether he could see what happened to the dog when they got into action.

“He said, ‘Well, he’s in the box there and he takes up the bottom two inches, lying down,’” said Walker. “The box had chips and bits blown off but it never hit the dog. We called him the artful dodger.”

As his troop approached the French village of Cressy, a man (they would find out later he was the mayor) approached and asked whether they had a water pump. They managed to find one through the engineering crew and followed the mayor to a duck pond in the middle of town, where they spent about 40 minutes pumping out water.

“He rolled up his trousers, took off his shoes, and waded out into the pond,” said Walker. “Then he put his hand down in the mud, groped around, and came out with a bottle. The whole pond was lined with bottles, there must have been 600 or 800.”

Villagers had lined the pond with bottles of liquor to hide it from the Germans during the occupation, he said. Most of it was Calvados, an apple brandy made in the region.

“It’s quite potent, it’s really got quite a kick to it,” said Walker. “Every June 6 now we toast to the people with Calvados.”

Of course the memories aren’t all positive, but it helps to have lighter moments to look back on – especially when some of the darker times creep in.

Like the time Walker’s crew was holed down, brewing tea, and saw three unarmed men coming toward them. They were Italian and German soldiers, he said.

A gunner in one of the armoured cars opened fire, unprovoked, and killed all three men, even though their arms were raised in submission.  The crew, upset with the gunner, wrestled him to the ground and he was carried away by military police.

“We didn’t know much about it then,” said Walker. “But what had happened, in the morning he’d got a letter from I think his aunt in London, and his mother, his uncle, and I think two brothers were all killed in the bombing in the London Blitz, and he just lost it.

Walker considers himself fortunate to have survived the war and make it to Canada, where he studied at McGill University.

He did suffer one injury, which resulted in five fused discs in his spine after recovery, but he was still able to function and work throughout his adulthood. He was very close to losing his life that day in Germany.

There were two walls along a cobblestone alleyway, and Walker was sitting on the lower of the two with a couple of his comrades. The Germans figured out the British soldiers’ position and began throwing mortar bombs.

One bomb hit the bottom of the wall where Walker was sitting.

“I was the lucky one, I was in the middle. I survived,” he said. “The fellow on my left had a hole through him and the fellow on my right lost his head. They were both killed instantly.

“I was blown off the wall and dropped 16 feet onto cobblestone on my rear end. That was the injury I got.