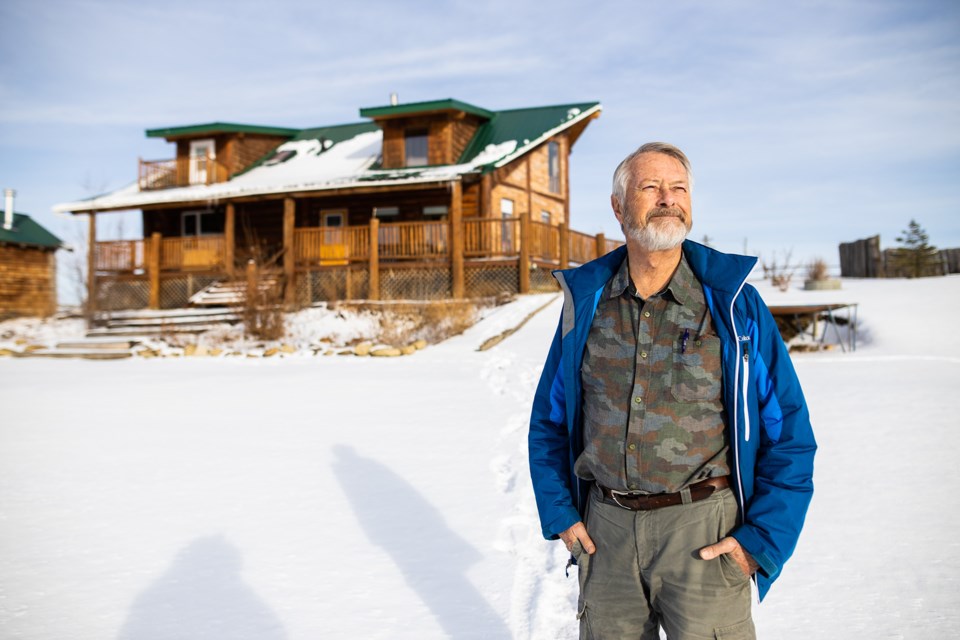 Rick Harbidge stands in front of his Cayley-area timber frame home on Nov. 7. Harbidge has opted to offer the home up in a letter-writing contest. Entrants can write a 400 word letter on why they think they should win his home that will be judged by a panel of three judges. The cost to enter will be $100 and the deadline is Dec. 1.(BRENT CALVER/Western Wheel)

A Cayley-area couple is hoping to learn from the mistakes of a Millarville resident as they offer their home as the grand prize in a public contest.

“She made some mistakes and we’re hoping to fix that,” said Rick Harbidge.

He’s referring to Alla Wagner, who ran a contest to give away her $1.5-million, 4,200-square-foot home in the Millarville area last spring.

Her contest, which asked people to send in 350 words about why they wanted to live in the house along with a $25 entry fee, was not successful – she received 4,627 of her targeted 68,000 entries.

Harbidge said they’re doing a few things differently. For starters, a smaller home with lower market value means they don’t require as many entrants – just 5,200 letters of 400 words or less along with $100 entry fees.

He said part of the issue for Wagner was she had taken on the workload alone.

“That was very daunting,” said Harbidge. “We have three people who will be doing the judging, an accountant maintaining the financial part and getting drafts to the judges.”

The judge panel will not see names attached to the entries, but will narrow down their winner based on stories alone, he said.

They’re looking for people to answer a couple of very simple questions – why they want the house and what would they do with it. The deadline for submission is Dec. 31, and the person chosen to receive the home will be notified by the end of January, he said.

He said the home has been listed for a while, but the market wasn’t moving so they decided to think outside the real estate listing and run the contest. The home will remain on the market while the contest runs.

If there are not enough entries, or if the home sells for market value, entrants will be refunded their $100 less a $5 administrative fee, he said. However, if they get close enough they may try to make a deal.

“If it’s $20,000 or $50,000 short, we will approach the person who was chosen and ask if they could make up the difference,” said Harbidge. “It’s all in our rules. We want to be upfront about everything.”

The log home was built by Harbidge himself, with the help of some friends. It took two-and-a-half years to construct and he used locally-sourced logs from Cataract Creek to build the walls – and some of the furniture inside, as well.

A king-sized log-frame bed in the master bedroom is one of his pieces, and it comes along with the home.

“The bed is so big it won’t fit in a normal home,” said Harbidge.

After living in the home for 13 years, the couple is trying to move into High River.

“We’re both seniors and it’s getting too much work and we have some physical struggles as well,” said Harbidge.

He said they hope the contest will generate interest in the home, whether that means having the targeted number of entries or pointing potential buyers in the right direction.

“We really hope we get enough people in the contest to make it all worthwhile,” said Harbidge.