More than 20 Okotoks area organizations will benefit from the resale of used goods. The Foothills Salvage and Recycling Centre Board donated $150,000 to charitable groups in March.
0
May 30, 2018 6:00 AM By: Krista Conrad 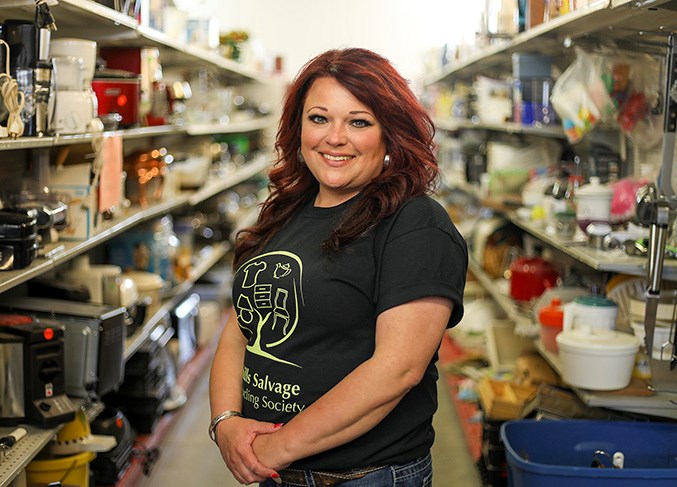 Foothills Salvage &amp; Recycling Society manager Julie Echlin on May 19. The Salvage Centre was able to donate $150,000 to charities from its 2017 proceeds.

More than 20 Okotoks area organizations will benefit from the resale of used goods. The Foothills Salvage and Recycling Centre Board donated $150,000 to charitable groups in March. As a non-profit organization, all profits from sales at the Salvage Centre are donated to charities each year. In addition, salvage centre manager Julie Echlin said about $30,000 is given to food banks in Okotoks, High River and Turner Valley at Christmas. “We are happy we can contribute back to our local community by donating to other worthy non-profits,” said Echlin. She said local not-for-profit organizations are encouraged to apply for funding each year, providing a description of the group and how receiving a donation could help achieve its goals. This year, two new applicants received funding: the Longview Seniors Club for a wheelchair-accessible bus, and Sheppard Family Park in High River for repairs needed at the historical site due to flood damage. In addition, donations were given to the Boys and Girls Club, Okotoks Family Resource Centre, Habitat for Humanity Foothills, Food for Thought, Big Brothers and Big Sisters, It Takes a Village, Literacy for Life, Oilfields Food Bank, High River Food Bank and Okotoks Food Bank. Okotoks Coun. Matt Rockley, who sits on the board, said the amount given this year was fairly consistent as previous years. For the most part, groups received the amounts requested in their applications, he said. “The overall philosophy has been primarily focused on basic needs, like housing, food, clothing, those types of things,” said Rockley. “That gives us a bit of guidance in the funding requests.” However, volunteers also get some say. Of the $150,000, there is $75,000 earmarked for salvage centre volunteers to allocate to charities of their choice, he said. The $75,000 is divided by the total number of volunteer hours over the year, to give an amount per hour. Each volunteer can then choose an organization to receive a donation. “However many hours they’ve volunteered times the hourly amount, that’s how much goes there,” said Rockley. “There’s a really wide variety of charities because it’s volunteer choice on that side.” He said he enjoys being on the board because everything about the organization is very positive. From community support through items dropped off at the centre to those who are in need being able to purchase items at a reduced cost, and the charities that benefit at the end of the fiscal year, he said the centre meets a number of positive objectives. “It keeps those useful materials out of the landfill, which is great,” said Rockley. “It gives all of those items a second life and it generates local employment opportunities and also provides funding for local charities. “Being able to take things that were considered just garbage and create all of these good things from it is pretty special.”