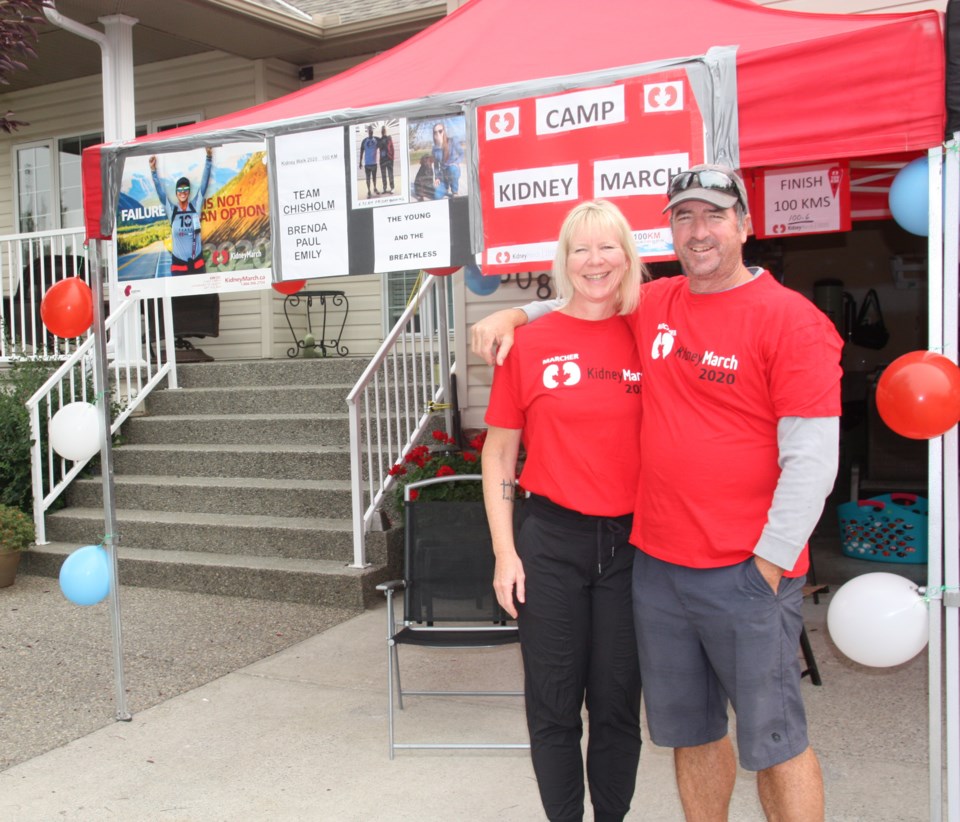 Brenda and Paul Chisholm celebrate finishing the 2020 virtual Kidney March on Sept. 13 at their neigbhours’ home in High River.

Support from neighbours, friends and loved ones helped a couple, that work in the Okotoks area, walk the talk and raise money for kidney research.

Brenda and Paul Chisholm, who work at Okotoks’ Infinite Chartered Accountants and the Cargill elevator in Blackie, respectively walked 100km for the annual Kidney March on Sept.  11-13.

“Our daughter, Haley, got diagnosed with this rare kidney disease since she was 10,” Brenda said of their 21-year-old daughter.

“It’s a progressive disease and generally people who have it, within 10 years have kidney failure.”

However, because Haley was diagnosed early and with medication, she is healthy.

Healthy, and their daughter is the motivator for the Chisholms lacing up their walking shoes for the annual march.

Typically, the event starts near Turner Valley and ends at Winsport in Calgary, but this year, the Chisholms were on their own. Due to COVID-19 it was a virtual walk and they walked in Foothills County and the extensive Happy Trails in High River.

While nice to be close to home, they missed the togetherness of the three-day march.

“There is a lot more camaraderie when there is 400 of us,” Paul said.

They tried to make the virtual walk as close to the real one as possible.

“We emulated the march experience as much as possible,” said Paul, who has done the march five times. “We tented outside of our house because we would tent in the march… We haven’t had to cook a single meal our neighbours cooked every one. They set up our camp for us... As much as this is the COVID version of it, our neighbours have tried to make it as original as possible.”

What didn’t change was the whack of money the Chisholms were able to raise for kidney disease research.

Close to the original, but with a few extras.

A real calorie burner — if the neighbours weren’t such great cooks.

Paul said he gained weight after the first day, he ate so much food — including gourmet style dinners while on the walk which were supplied by his neighbours.

While they did have some of the comforts of home, they didn’t have all of them.

“The showers were good, but the toilet breaks you had to find a place,” he said.

Paul credits his wife for getting him through the walk.

Brenda is the motivator of the pair.

“The appropriate word is slave driver,” Paul said with a chuckle.

For more information go to kidneymarch.ca