The County will begin work to identify an alternate site for the tower, which would bring Internet service to the west of the municipality.
Feb 23, 2021 8:00 AM By: Krista Conrad 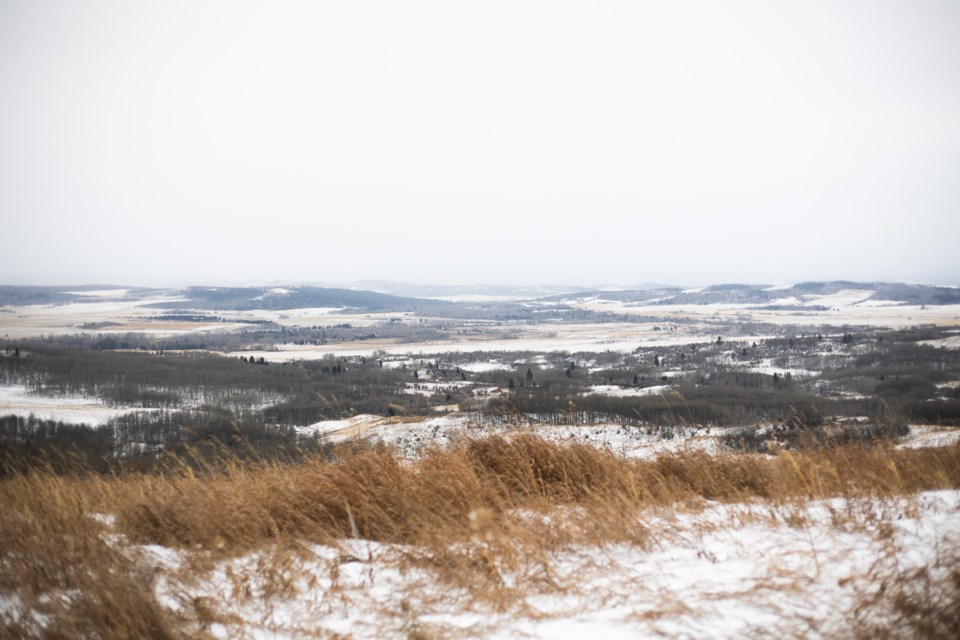 Foothills County has turned down a proposed tower in the Millarville area after surrounding residents submitted letters of opposition. The County will begin work to identify an alternate site for the tower, which would bring Internet service to the west of the municipality. (Brent Calver/Western Wheel)

Foothills County has turned down a proposed tower in the Millarville area after hearing opposition from neighbours.

Rigstar Communications Ltd. submitted a proposal to locate a tower on agricultural land bordered by 1119 Drive W and 144 Street, at the top of a ridge near Leighton Art Centre following public consultation by way of a one-mile mailout to area residents and newspaper advertisements, as well as installing a mock tower for a few weeks to give neighbours an idea of what the tower would look like.

More than 23 responses were received by the public, and Foothill County planner Brenda Bartnik said only three showed support for the tower, citing poor Internet service in the area.

“The remainder of the respondents, understandably most of the responding parties nearer to the proposed site and those which enjoy views from the best vantage point, had stated the strongest opposition,” said Bartnik.

She said they noted impacts to viewshed, esthetics, visual impact and preservation of the scenic natural landscape, as well as some health concerns.

Rigstar’s proposed tower did fit the policy laid out by the County, which stipulates they should be located on agricultural lands and set back from municipal roads, and that public consultation must be done, she said.

While the County turned down this site, she said it ultimately comes down to Innovation, Science and Economic Development Canada, which is the regulator and requires companies consult with local land-use authorities prior to being licenced.

The County is now working to identify a more suitable location in the area to achieve better connections for residents in the West Country without impacting other residents, and in keeping with federal policy that stipulates when a location is denied an alternative must be found.

Municipal Manager Harry Riva Cambrin said that has been the general direction given to municipalities in the past.

“But in the end, the regulator can approve any site, whether there’s support from the local authority or whether the residents are in support,” said Riva Cambrin. “If we don’t come up with an alternate that the company supports, in the end the regulator has to make a choice.”

Coun. Jason Parker, who represents Div. 3 residents in the Millarville area, said he hopes a solution can be found that would have less impact on residents but still help get stronger connections to people further west where stable Internet is lacking.

It’s an issue that isn’t going away any time soon, he said.

“Especially with COVID, a lot of these folks have children who are school-age and some of them have next to no Internet at all,” said Parker. “There is drastic, drastic need and demand for Internet in this area.”

However, he said he also appreciated the concerns of those living near the proposed tower site, which was intended to serve not those in the immediate vicinity but those who live miles away.

He said it’s important to find an alternate site as soon as possible.

“We need to get more Internet out west, because people are affected, people who are trying to work from home and can’t,” said Parker. “COVID has changed the world, it changed the way we operate, and it’s not necessarily going to go back to normal because there’s a lot of folks who are going to be operating and working from home.”

Div. 5 Coun. Alan Alger, whose residents also border the proposed tower site, said hearing the voices of the public was important, and he hopes a different solution can be found.

He also noted the notion of placing a mock tower at the proposed site for a period of time was intriguing and provided a new way for residents to envision what, if any, impacts such a project would have on them.

“I think it’s a great idea and I think we need to see more of that, with our different application that we deal with,” said Alger.