Local business owners are excited but challenged by reopening their doors this month with new regulations and recommendations from the Province meaning half-capacity for restaurants and hairstylists, as well as additional cost of PPE.
May 13, 2020 8:00 AM By: Krista Conrad 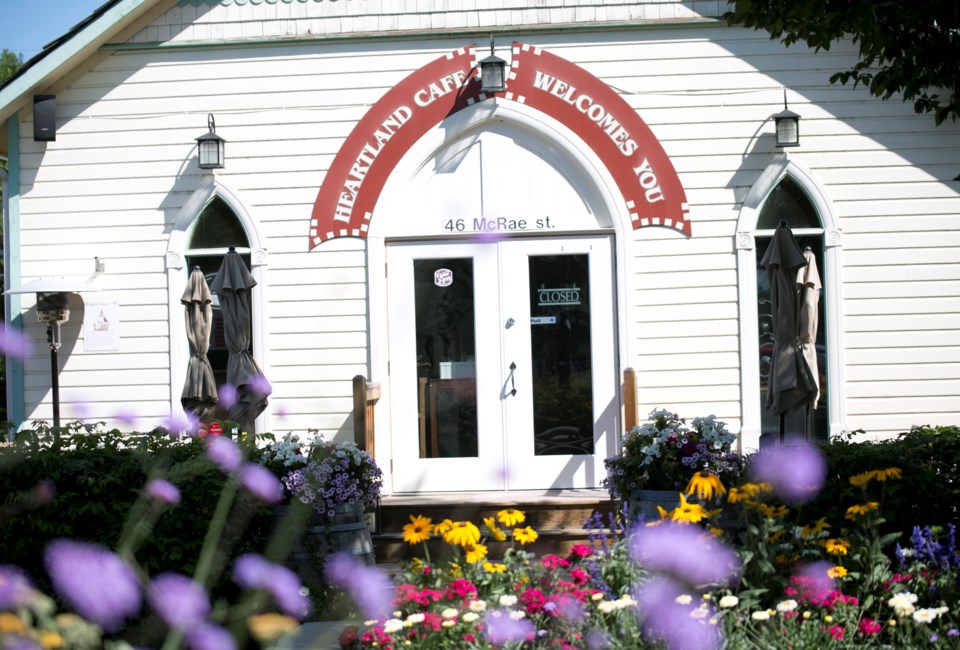 Heartland Café is able to open at half-capacity with regulations and recommendations from the Province in phase one of the relaunch strategy. (Remy Greer/Western Wheel)

Some businesses are getting the green light to open this week but it’s not going to be business as usual.

The Province announced the first phase of its relaunch strategy last week, which will allow some retail stores (clothing, furniture and book stores) to reopen, as well as farmer’s market vendors; hairstylists and barbers; cafes, restaurants, pubs and bars (at 50 per cent capacity); museums and art galleries; daycares and out-of-school-care facilities with limited capacity; summer camps and summer schools with limited capacity; and more scheduled surgeries or dental procedures will be permitted.

Plans are to permit these businesses by May 14, depending on COVID-19 statistics in the next week.

Restrictions remain in place for gatherings of more than 15 people, as well as events or businesses that promote close physical contact like festivals, sports events and concerts, and classes for K-12. Visits to hospitals will remain limited as well.

It’s good news for hairstylist Kim Ulrich, who shut down her chair at Eko Styles in Okotoks on March 17.

“It sucked,” said Ulrich. “For me, I’m busy all the time – working, volunteering, doing sports, playing ball, working out. It was hard for me.”

With a hiatus on the salon chair, Ulrich took time for herself and completed online courses, then decided to make a change and start up her own business. She’ll be moving Ulrich Creations to a chair at How We Do salon in High River starting May 14.

“It’s kind of a little bit nerve-racking, it’s exciting, especially going out on my own,” said Ulrich. “Especially because we also have to hope they don’t shut us down again.”

That’s the top concern for hairstylists coming back to work, she said.

Even with salons and barbers coming back, she said there are going to be marked changes to how the businesses operate.

Customers won’t be offered beverages or magazines when they go in for their cut-and-colours. They also can’t arrive early and in many cases, this means clients will be waiting outside the doors until they get called in, said Ulrich.

Additionally, nobody can accompany someone to an appointment, including children. That also means parents can’t be inside the salon while their children have their hair cut, she said.

The biggest hit is not being able to double-book, which is a common practice for hairstylists, she said.

“If you’re doing a two- or three-hour colour, when that colour processes you have at least 45 minutes, so usually you’re doing another haircut or putting in another set of foils, but I can’t do that,” said Ulrich.

Between each client, stylists must have a 15 to 20-minute sanitizing period to clean everything down, which also reduces the number of cuts or colours they can squeeze into a day, she said. For most, it will mean doing half the work they’re used to.

Some recommendations from the Province don’t come as a surprise, and Ulrich said they’re things hairstylists should be doing anyway – like sterilizing brushes, scissors and combs in barbicide between uses and changing out capes for each client.

At How We Do, the chairs are already six feet apart, but some salons will be forced to use only every second station to comply with spacing standards, she said.

As for personal protective equipment (PPE), she said the Province has recommended gloves and masks for clients, and encourages stylists to use them as well.

“We’ll have to figure out how much of that PPE we’re using because the masks and stuff are expensive,” said Ulrich. “By the time you buy the extra PPE, and you’re already down half what you were making, at least – and most haven’t been working for two months. It will be a challenge.”

But it’s a challenge she’s up to taking, if it means getting back to work – even if the days might last and feel longer with a lot of unusual downtime between clients.

“I’m excited to get back to work,” said Ulrich. “There are a lot of people judging out there, but we’re going to follow what the government is saying.”

Viktoria Radi, co-owner of Heartland Café, is equal parts nervous and excited about opening the restaurant to in-house seating for the first time since March 18.

“Excited but at the same time we don’t know how much it will be, because a lot of people feel skeptic about the reopening, which is pretty normal I think,” said Radi.

Because of the Province’s regulations for restaurants, Heartland isn’t quite ready, and will wait until after the long weekend to reopen on May 19, she said.

It’s taking time to move tables in order to comply with a six-foot buffer between diners, ensure hand-sanitizing stations are in place throughout the restaurant, and rework the menu, which had been changed for take-out and delivery only – services they had never provided before, she said.

“Now we have to figure out again what our new menu will be,” said Radi. “Half-capacity is really not enough, so we have to keep the take-out and delivery as well.”

She said it’s a challenge, but the chefs are working hard to create a great experience for customers, whether they eat in or take-out.

Like hairstylists, they’ll be donning masks and gloves to wait on tables. It’s especially important in restaurants, where customers can’t necessarily wear their own, she said.

“They have to feel safe when they are coming, and of course they can’t be wearing masks because they’re coming for dining,” said Radi.

Being reduced to half-capacity will impact Heartland’s staffing levels and hours of operation. They can’t afford to employ everyone who was on the payroll before with fewer customers, and will be open five rather than seven days per week, she said.

Radi expects the first couple of weeks to be the hardest, as people adjust to having businesses open after two months.

“People have to build a new relationship with customers,” said Radi. “When they’re coming they have to trust us, trust that we sanitize well.

“The new normal is not the routine. It’s a challenge for everybody, I think, the reopening.”