Online public consultation will take place prior to council giving final approval of the revised screening and design guidelines for the Highway 2A industrial area.
0
May 22, 2020 10:00 AM By: Krista Conrad 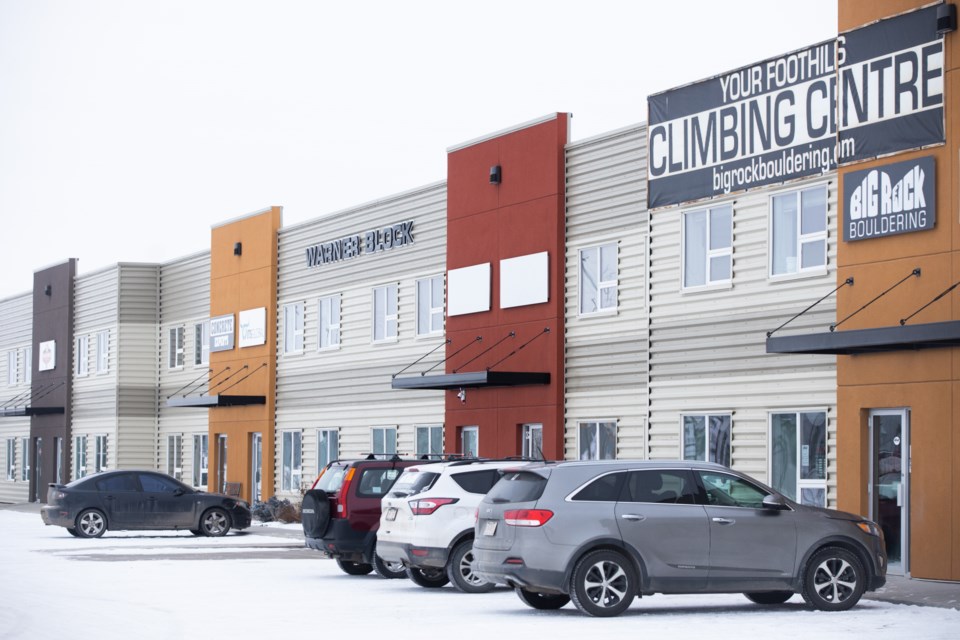 A row of bays in the Warner Business Park near the Aldersyde overpass. Foothills County is revising its screening standards and design guidelines for properties along the Highway 2A industrial corridor. (Brent Calver/Western Wheel)

Screening standards for the Highway 2A corridor are being revamped by the County.

Foothills County amended and simplified its screening standards and design guidelines for the industrial corridor, and with a nod from council the revised documents will go out for online public consultation before coming back to the table for final approval.

“You’ve taken it and run with it just like we asked and you’ve come up with, I think, a very easy-to-follow two documents here,” said Reeve Suzanne Oel.

Businesses currently operating in the Highway 2A corridor will not be required to change their current screening measure unless they fall short of the new guidelines, said Heather Hemingway, the County's director of planning. This is also the case should those businesses come under new ownership.

“If it’s a very similar or a new use, if the structure already has the required landscaping and screening then there isn’t a further need to upgrade, as long as it meets the standards in place at the time,” said Hemingway. “If we were to change these standards or increase these standards, then there would be a requirements to upgrade.”

Coun. Rob Siewert expressed concern with requirements of the screening standards to have nice-looking landscaping features and visibility at the entrance of properties.

“When I think about Abild’s (Industrial Park), for instance, that would be on the inside of the development rather than along the highway,” said Siewert. “It seems to me it should be more along the highway where you would want the nice-looking, that sort of thing.”

The issue there, said Hemingway, is most business backing onto Highway 2A use that portion of the lot as storage rather than the entranceway to the business. Additionally, the berm between the highway and the business park is part of the transportation network and not owned by the landowners, she said.

Some standards have not changed, such as the maximum site coverage, including all buildings and impermeable surfaces, not exceeding 60 per cent of the total lot area, or being supported by a storm-water management plan.

However, council was asked to consider what 50 per cent screening could entail, with potential options being the lower half of a development (such as a berm or fence covering the bottom half but not upper half of buildings and other structures); only screening half of a site (two of four sides of a lot as opposed to all sides); and using an opaque or semi-opaque fabric on a chain-link fence that would reduce visual impact by about half.

“I frankly think they’re all fine to consider; however, we would like some guidance from council,” said Hemingway. “What do you think of when you think 50 per cent screened?”

The options will be part of the online public consultation process, with the County looking for feedback from respondents prior to council revisiting the design guidelines and screening standards documents.

With some prompting from Coun. RD McHugh, the public will also be asked for opinions regarding vinyl slats in chain-link fence being part of the suggested methods of screening. It’s a method previous councils ruled out.

“Council at the time was not supportive of the vinyl slats because it was felt they don’t withstand the test of time,” said CAO Harry Riva Cambrin.

He said the problem with any fencing is it needs to be maintained properly or risks becoming dilapidated and unattractive.

McHugh said he would like to see vinyl slats permitted on the backside of properties, not on business fronts.

“I think there are occasions where it makes complete sense,” he said. “You’ve got a property that’s all chain-link and it’s on the back, it’s not on the front, maybe they break down but they’re also easily replaceable and they’re also economical.

“I would be in favour of adding vinyl slats back in with a few conditions.”

Oel said she’s pleased to see work being done on the streamlining of screening standards and the County’s dedication to upholding the character and upkeep of the industrial areas of Highway 2A.

“With the investment we’re putting into the corridor with the water, wastewater, fibre and future roads I think it’s great we’re trying to consider having some attractive qualities to the land and also keeping up the value of the properties,” said Oel.