At a time when images of starving people fill television screens, a Foothills organization is trying to feed its own residents.
Dec 5, 2018 12:51 AM By: Tammy Rollie 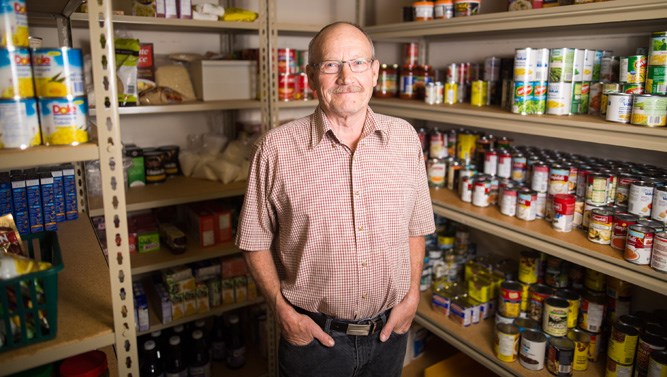 Oilfields Food Bank president Glenn Chambers said he expects the non-profit organization to meet the need of 80 individuals and families with Christmas hampers this month.

At a time when images of starving people fill television screens, a Foothills organization is trying to feed its own residents.

The Oilfields Food Bank is expecting to hand out approximately 80 food hampers to put Christmas dinner on the tables of families and individuals this month.

“The food bank is an extremely valuable resource to the community,” said president Glenn Chambers. “We’re not ever going to solve the hunger problem because it comes upon people very quickly, simply by job loss or a change in government.”

Chambers said food banks should not exist in Canada.

“Our government spends billions of dollars overseas to help people in poverty but we don’t do anything substantial for our own poverty,” he said. “As long as food banks exist we allow the provincial government to feel it’s being looked after so they don’t need to do anything. It doesn’t correct the problem permanently, it only masks the problem.”

The Oilfields Food Bank began operating in 1983 under the guidance of the Okotoks Food Bank, and became incorporated as its own in 2003.

In 2017, the food bank supplied 313 food hampers, 72 of which were Christmas hampers, to 418 adults and 249 children to Black Diamond, Longview, Millarville, Priddis, Turner Valley and area with the help of 1,669 volunteer hours.

Residents in the larger communities of Black Diamond and Turner Valley experience the largest need, with 86 per cent of food going to those communities, Chambers said.

The food bank receives 67 per cent of donations from the public and 33 per cent from corporate and business donations.

The volunteers began accepting applications for Christmas hampers in late October and will continue taking applications until Dec. 21, when the hampers are available for pick-up in the Lewis Memorial United Church basement in Turner Valley.

Chambers said 50 applicants have been accepted, and he expects that number to reach 80.

The hampers consist of everything needed to make a Christmas dinner, said Chambers, including a turkey, potatoes, stuffing, cranberries, vegetables and materials to make a pie.

“Our mission is to ensure everyone in our community has emergency food and that no one is turned away from the food bank and people have the accessibility when they need it,” he said.

The firefighters’ food drive in November is the biggest drive for the food bank, with departments in Black Diamond, Longview and Turner Valley going door to door one night in early November to collect food.

“It’s been pretty consistent over the last four or five years,” Chambers said.

One aspect that allows the food bank to meet the needs of the hungry is the volunteers, he said.

Gary Rowntree, Turner Valley’s mayor, said he began volunteering at the food bank a year and a half ago.

“They were having trouble getting consistent support on intake so being that it’s our church I said I’ll take on that role,” he said. “I was doing it full time until such time as I became mayor. I went to some members of our church for help. Now there’s a group of women from the church that are on a schedule.”

Rowntree alternates with those women on Tuesday afternoons, registering clients and ensuring everyone’s needs are filled.

“It’s all a computer system so everyone is trained on the computer,” he said.

The food bank is a critical part of the community, said Rowntree.

“The demand is certainly there and when you sit on the outside you think everybody is the same as you are,” he said. “In our case we have a pension, we live in our home, we do our own grocery shopping. There is a segment of society that doesn’t have that so it’s nice to have that support for them.”

Okotoks Legion holds reduced ceremony to mark Victory in Europe Day
May 9, 2021 10:00 AM