Farmers get say on repealing Bill 6 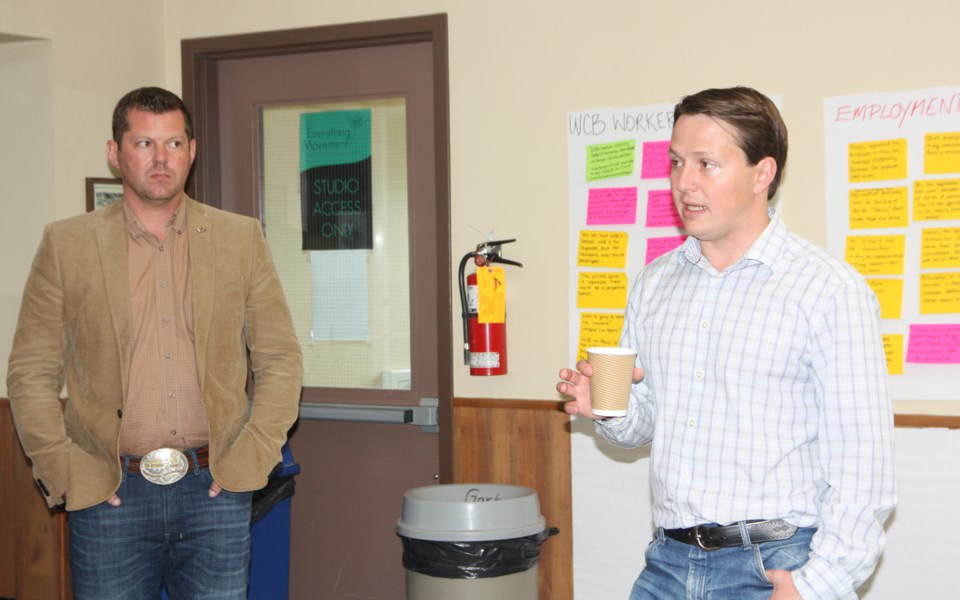 A Blackie area farmer felt he was heard for the first time at an open house concerning  farm safety legislation Monday in Okotoks.

“I thought that what today showed is the government is concerned about the farmers’ needs and are willing to listen, that hasn’t happened in the past,” said Gregg Percival, who farms north of Blackie.

Approximately 18 people attended the UCP’s Farm Freedom and Saftety Act discussion at the Okotoks Agricultural Society, which was attended by Highwood MLA RJ Sigurdson and Devin Dreeshen, the provincial agriculture and forestry minister.

The discussion, one of several being conducted across the province, is part of the United Conservative Party’s campaign promise to repeal and replace the NDP’s Bill 6, Enhanced Protection for Farm and Ranch Workers Act, passed in December 2015.

The bill, which extended workplace legislation to farms and ranches including  Employment Standards, Workers’ Compensation, Occupational Health and Safety and labour relations, applied to non farm-family workers on the farm.

“I think what I wasn’t prepared for is the government saying: ‘This is what you have to do,’” he said.

Bill 6 faced huge opposition in rural Alberta, including a large rally in Okotoks in the late 2015 at the parking lot of the Best Western Hotel.

Percival said he has one employee who is not a family member and the individual has since been covered by Workers’ Compensation.

“I think that’s a good thing — these employees need that protection,” Percival said. “I’m just saying why force it upon us.”

He said the biggest issue is the restrictions in regards to Occupational Health and Safety (OHS).

“That has to be either revamped or thrown out,” Percival said. “OHS doesn’t understand the farming community and how diversified it is.”

He said it is difficult to peg a farmer into just one  role when it comes to working the land.

“He’s not just a farmer he’s an electrician, he’s a carpenter, he does all that stuff,” Percival said. “OHS has all these rules for all these occupations and they have to abide by them.

“Yet they expect the farmer to abide by them when he has to wear all these different hats every day. It absolutely doesn’t work.”

Minister Dreeshen said the discussions across the province is to ensure there is consultation to the people most affected if and when the bill is changed.

“They brought in Bill 6 and there was no consultation done with the farm community,”
Dreeshen said.

He said while the NDP massaged and reshaped the bill it just never fit.

“At the end of the day, farms could never be in compliance,” Dreeshen said. “It was never actually a practical piece of legislation.”

He said himself, Sigurdson and the UCP party campaigned on a platform of Bill 6 repeal and replacement.

“With that came consultation,” he said. “That’s what this tour is about. Going to farmers and ranchers across the province to find out how best to accomplish that.”

He said there have been some common threads among the public discussions around the province.

“Farmers want this new piece of legislation to be practical, to have common sense,” Dreeshen said. “So that at the end of the day the safe farms of today would be in compliance with legislation, which ideally we get passed this year.”

He said he has also heard from farmers they would like to have the choice of either offering Workers’ Compensation or being allowed to use private insurance for  their employees.

“Having insurance on farms was a positive development,, ” he said of Bill 6.

Concerns of not being able to get product to market — such as canola to China — has also raised the ire of Alberta farmers.

“Whether it’s canola with China, durum with Italy or pulses to India, there have been lots of market access and trade issues over the last few years,” Dreeshen said.
“That’s been extremely frustrating for farmers.

“Farmers here in Alberta should not be bearing the cost of the federal government’s mismanagement of a lot of these trade files.”

He said farmers have also expressed concerns about the large disconnect between rural and city living — including in the Wild Rose province.

“You get this constant barrage, that misinformed Albertan of what it actually means to farm,” he said. “We have heard, ‘Can the government somehow work with industry and farmers to better tell that agriculture story?’”

The consultation should be done by the end of this month. To have your say go to www.alberta.ca/farm-freedom-and-safety-engagement.aspx