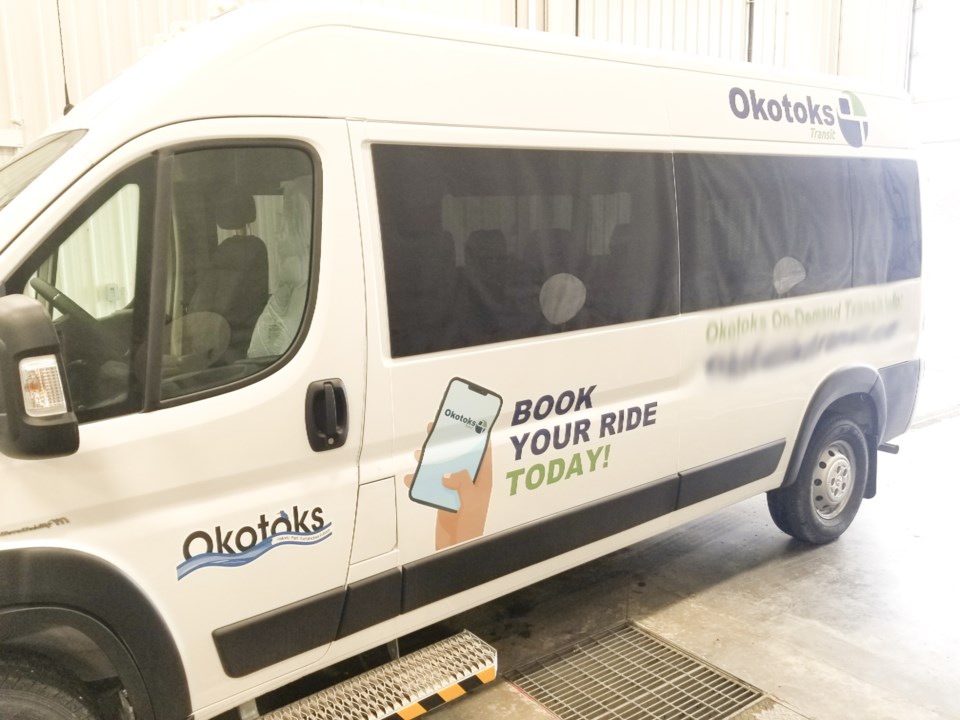 An Okotoks Transit van is being prepared for launch of the Town's on-demand service in December. PHOTO COURTESY TOWN OF OKOTOKS

It will be just over one more month until Okotokians can access on-demand transit.

The service is set to launch Dec. 2 and will allow residents to book rides online or via a mobile app for curb-to-curb transit.

“It’s almost like a hybrid,” said Nancy Weigel, corporate and strategic services manager for the Town of Okotoks. “The only difference between this service and a taxi is it’s a shared ride.”

“The rates and fees are on a scaled schedule so basically the more you buy, the larger your discount,” said Weigel.

Mayor Bill Robertson questioned whether rides would be offered for free at launch, as is currently being done in Cochrane. Children eight and under ride for free with Cochrane’s on-demand service.

“I think they’re trying to establish ridership, so I like the idea of having it free for everybody for a period of time,” said Robertson.

Weigel said the Town looked at Cochrane’s model but opted not to follow suit.

One of the main reasons was to establish loyal ridership it will be important to offer quality service from the get-go, she said.

“You want riders to have a really good first experience,” she said.

She said Okotoks transit specialist Dave Gardiner tried booking a ride on Cochrane’s system to test it out, and in its early days the free system was so overloaded it was several hours before he was able to book a ride.

“We decided against that because we were too afraid that those who really needed it and wanted to use the service would get turned off by their experience with it,” said Weigel.

Coun. Florence Christophers said she’s sure there will be “explosive demand” for the service once it’s launched.

One of the main demographics could be teens, she said.

“They’ve got $2.75, they’ve got spending money for Slurpees and whatnot,” said Christophers. “So I think some of that money is going to go towards this service.”

Weigel said the Town also expects the service to be used a lot by the senior population.

Currently, through the existing Community Access Program offered by the Okotoks Family Resource Centre, a one-way taxi ride costs $5, she said. With the on-demand transit, a round-trip will be $5.50 instead of $10 – unless tickets are purchases in bulk, which makes the ride cheaper, she said.

“I think this is just what the Town of Okotoks needs,” he said. “The carbon footprint is fantastic and it’s greatly reduced.”